Analysis: Where will the coaching carousel land this time? 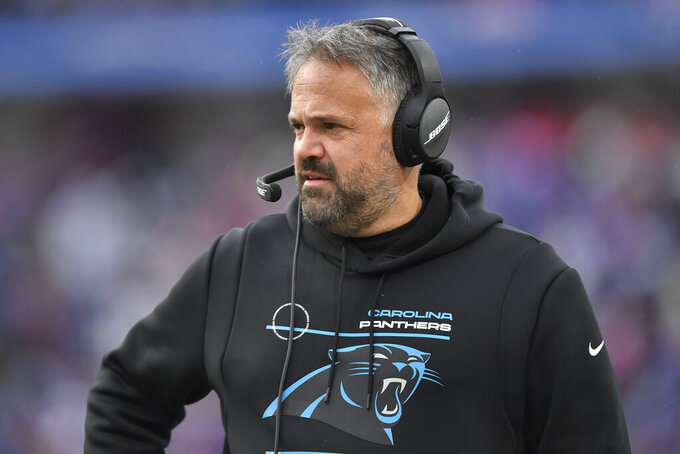 Just like the Super Bowl, the draft, and the Jets missing the playoffs, there is another ritual in every NFL season.

It's spinning already with two openings, in Las Vegas and Jacksonville, forced by the departures of two disgraced coaches, Jon Gruden and Urban Meyer. It might also hit in Chicago, Minneapolis, Charlotte and New York. There are even rumblings that one of the best pro coaches of the last decade or so, Pete Carroll in Seattle, might have worn out his welcome.

Let's dismiss that one; Carroll has earned the right to determine when he will leave the Seahawks. Yes, he's the oldest coach in the NFL and this has been his worst season. But Carroll has a way of figuring out things, just like Sean Payton in New Orleans, John Harbaugh in Baltimore, and Mike Tomlin in Pittsburgh. All elite coaches with Super Bowl rings whose teams are struggling. None deserves to be dismissed.

As for the others, here's a closer look - presuming the likes of David Culley in Houston, Dan Campbell in Detroit and Vic Fangio in Denver are safe.

This seems the most likely change, though Nagy has a winning record in his four seasons, 33-32 through last week's comeback victory at Seattle. The main issues in Chicago have been:

— The lack of development at quarterback. This will be Justin Fields' team moving forward, regardless who is the coach. But the decisions made on Mitchell Trubisky, Nick Foles — the winning QB last Sunday — and Andy Dalton have caused regression on offense.

— A defense that also has regressed from a big-play unit of near-championship caliber to a so-so unit.

— A severe lack of discipline in all aspects of on-field performance.

Former Eagles coach Doug Pederson would appear to be a wise option if Nagy is released.

There's little doubt that Zimmer is a solid coach, but his talented team has underperformed and struggles in close games. Simply put, the Vikings can't finish.

While Zimmer almost certainly would be gobbled up as a defensive coordinator should he become available, his D hasn't been notable in Minnesota.

There's also a question of whether, after eight years there with a good record but diminishing returns, whether it's time for a fresh approach.

Late in his second consecutive losing season in Carolina, the man who turned around Temple and Baylor in college heard “Fire Rhule” chants on Sunday when the Panthers were routed by the injury-ravaged Buccaneers. In fairness to Rhule, the team started 3-0 and then lost its most important player, running back Christian McCaffrey. The Panthers never have been the same.

Odds are Rhule, in the second year of a $60 million contract, gets another season at least. He insists things aren't so depressing.

Very similar to Rhule's situation, the Giants coach is getting all sorts of heat at the end of his second losing season. This year was all about developing Daniel Jones, but the quarterback's neck injury, the sidelining of some key players throughout the offense, and a general malaise in recent games has added to the criticism.

New York has not scored more than 10 points in the first half, an indictment of preparation as well as execution. He also is the third straight coaching hire the Giants might have missed on: Ben McAdoo, Pat Shurmur and Judge.

He probably deserves one more shot, but the uncertainty with Jones is an albatross for the entire franchise.

The Gruden redux was a flop, ending ignominiously. The Raiders could use someone less mercurial and able to deal with the modern locker room. A strong voice with a winning pedigree in the NFL seems best. Someone from the same mold as a Tomlin or Payton.

Too bad the team moved on from Jack Del Rio in 2018 when it went after Gruden.

This one should be easy for owner Shad Khan. Don't go with a college coach, don't go with the big name out there who has no NFL cred, and don't ignore that Trevor Lawrence needs a quarterback whisperer.