Another federal lawsuit over playoff 'no call' dismissed 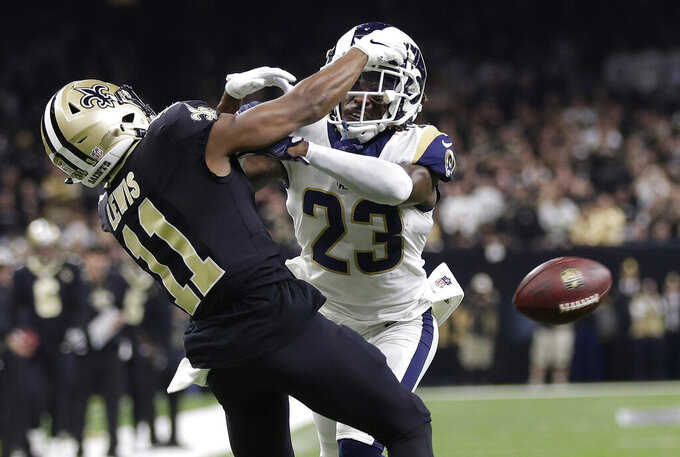 NEW ORLEANS (AP) — The last of three federal lawsuits against NFL officials over the failure to call a blatant penalty in January's NFC title game between the New Orleans Saints and Los Angeles Rams has been dismissed by a U.S. District Court judge in New Orleans, leaving one state court lawsuit over the no-call still alive in Louisiana state court.

At the center of all of the suits is the failure to flag Rams cornerback Nickell Robey-Coleman for his helmet-to-helmet hit on receiver Tommylee Lewis with a pass in the air at a crucial point in the game. The Rams won and advanced to the Super Bowl.

Judge Susie Morgan's Tuesday ruling came in a class-action lawsuit against the league, NFL Commissioner Roger Goodell, three game officials and the NFL's vice president in charge of officiating. Morgan rejected arguments that people who bought tickets to the game are entitled to damage payments under Louisiana's civil code.

Ticket purchasers who filed the suit said the NFL and game officials, in effect, broke a legal promise that the game would be played fairly and that, if an unfair act occurred, that Goodell would, under a league rule, remedy the situation, perhaps by reversing the game's result or by rescheduling all or part of the game.

The league empowering Goodell to take such action isn't a promise, Morgan said. "The Plaintiffs do not allege Goodell promised to reverse the game's result or reschedule the game," she wrote. "This representation is not sufficient to constitute an actionable promise because it does not manifest an intention to act or not to act in a specified manner."

Related federal lawsuits were dismissed earlier this year. Two of those suits were originally filed in state court but the NFL succeeded in having them moved to federal court, based on the extent of possible damages sought and the interstate scope of the suits.

One lawsuit over the game survives in Louisiana state court. Attorney Antonio LeMon crafted the suit to keep the NFL from having it moved, in part by limiting the damages sought — which he has repeatedly said will go to charity — to $75,000. A state judge this month refused to block the suit and, on Monday, set September for questioning of Goodell and game officials under oath. League attorneys could appeal.