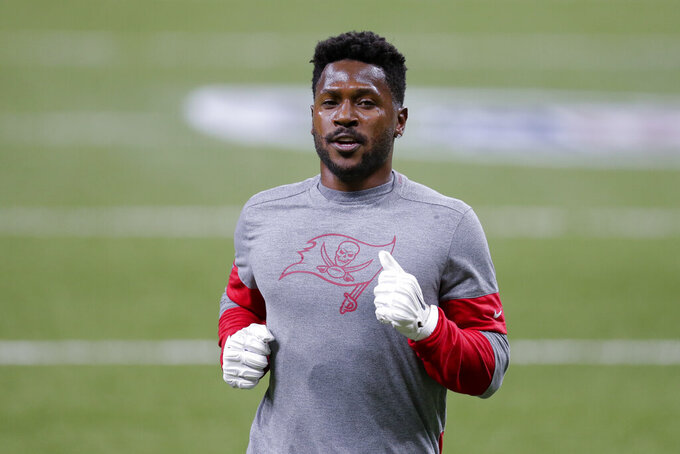 FILE - In this Sunday, Jan. 17, 2021 file photo, Tampa Bay Buccaneers wide receiver Antonio Brown warms up before the first half of an NFL divisional round playoff football game between the New Orleans Saints and the Tampa Bay Buccaneers in New Orleans. NFL wide receiver Antonio Brown has settled a civil lawsuit by former trainer Britney Taylor, who accused Brown of sexually assaulting her. Taylor filed the lawsuit in 2019, and lawyers for her and Brown released statements Wednesday, April 21, 2021 revealing the agreement. (AP Photo/Brett Duke, File)

Taylor filed the lawsuit in 2019, and lawyers for her and Brown released statements Wednesday revealing the agreement.

“Antonio and Britney have been friends over a decade. Several years ago they almost became business partners. Recently, they were involved in aggressive litigation. Having reflected on their relationship, both feel that the time has come to move on,” the statements said.

Brown’s statement was released by his representative, Alana Burstyn. Attorney David Haas made the statement for Taylor.

The civil suit stemmed from what Taylor said occurred in 2017 and 2018, when she said the player sexually assaulted her twice, then raped her. Brown countersued Taylor, claiming defamation.

Brown, currently a free agent after winning the Super Bowl with the Tampa Bay Buccaneers in February, remains subject to discipline under the NFL's personal conduct policy.

Brown's career has been marked by off-field incidents, and he served an eight-game suspension last season before joining Tampa Bay. That punishment came after he made a no-contest plea to burglary and battery charges last year. Brown also was accused of sending threatening text messages by a woman who said he also made sexual advances toward her.