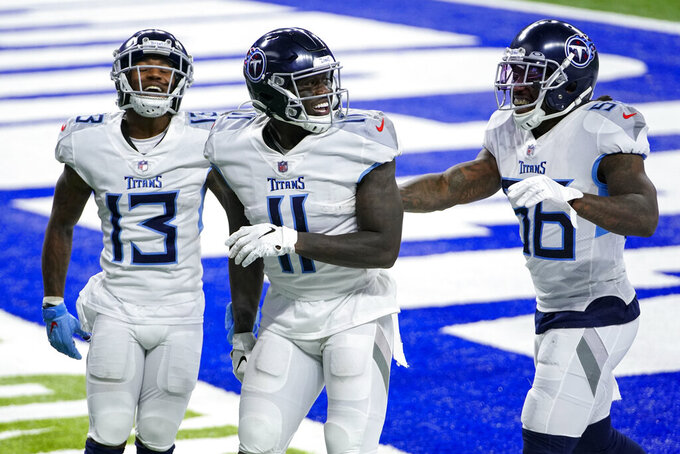 Tennessee Titans wide receiver A.J. Brown (11) celebrates returning an onside kick for a touchdown against the Indianapolis Colts with wide receiver Cameron Batson (13) and lDaren Bates in the second half of an NFL football game in Indianapolis, Sunday, Nov. 29, 2020. (AP Photo/AJ Mast)

NASHVILLE, Tenn. (AP) — The Tennessee Titans think they've taken two big steps in the right direction at the right time of the season.

The next challenge is proving they can stay atop the AFC South and win this division for the first time since 2008.

“All we’ve done is taken a few steps to to put ourselves in a position to continue to play meaningful games here in December," coach Mike Vrabel said Monday.

The Titans (8-3) stopped a skid of three losses in four games with a big overtime win at Baltimore. They followed that by routing the Colts 45-26 in Indianapolis to reclaim the AFC South lead with five games left. They lead the Colts by a game and also have the division record tiebreaker at 3-1.

Ryan Tannehill said obviously the Titans went through a tough stretch but kept working to improve. That approach won't change with Tennessee preparing to host Cleveland (8-3) on Sunday, the Titans' fifth straight opponent with a winning record.

“We want to keep improving as the season gets into the last stretch here, keep improving each and every week, and obviously be playing at our best when we head into December,” Tannehill said. "So, that’s our mindset – go out and attack every week and find a way to come home with a win.”

The offense. The Titans scored touchdowns on five of their first six possessions as they scored a season high in points, and they also held the ball for a season-high 35 minutes, 33 seconds. Derrick Henry set the tone on offense by scoring three TDs as Tennessee established the run early.

“He does his thing no matter where we’re at,” Tannehill said. "He’s a football player and a really good one at that. It’s important to us, and we want to keep it rolling.”

A.J. Brown also scored twice and Tannehill ran one in himself. The Titans scored 35 points in the first half — the most points scored in a first half of any NFL game this season. They now rank sixth averaging 29.5 points a game.

The defense. But the Titans are improving in this area. Still worst in the NFL on third downs, they have held three of the past four opponents to 38.4% or worse on third downs and kept the Colts to just 5 of 13. They also have come up with an interception in consecutive games after a three-game drought.

Henry. The NFL rushing leader posted his seventh 100-yard rushing game this season and third straight. He's also had eight straight road games with at least 100 yards rushing, tying Chris Johnson for the second-longest streak, trailing only Barry Sanders, who had 10 in a row for Detroit between 1996 and 1997.

The star running back also became the fourth in NFL history with three games with at least 175 yards rushing and three rushing TDs in their first five seasons. He joined Jim Brown (5), LaDainian Tomlinson (3) and Adrian Peterson (3) in that group.

Safety Kevin Byard. The defensive captain was flagged twice for pass interference. Eight Titans have at least one interception this season, yet Byard still is looking for his first after leading the NFL with 17 combined interceptions over the past three seasons.

Defensive backs Kenny Vaccaro and Amani Hooker were shaken up late in the win over the Colts. But Vaccaro talked with reporters after the game.

Plus-11 — The Titans rank second in the NFL in turnover margin after not turning the ball over even once for a seventh game this season.

The Titans are back home hosting Cleveland. After the Browns, they will have only one opponent, the Packers, with a winning record in the final four games.