Bears, winless Lions try to bounce back from rough losses 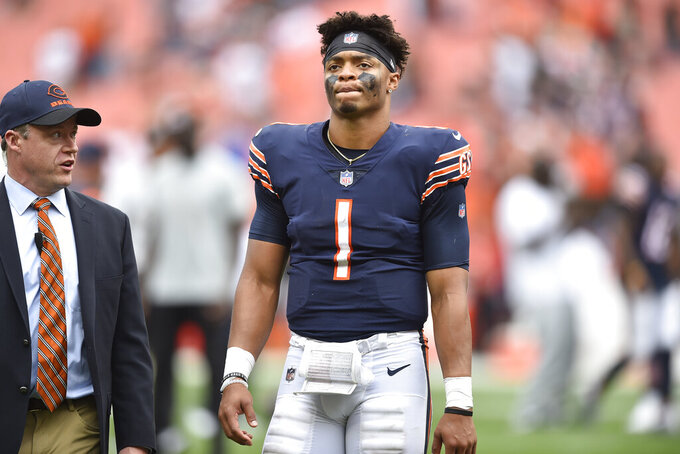 OPENING LINE: Bears by 3½, according to FanDuel SportsBook.

LIONS PLAYER TO WATCH: QB Jared Goff did not throw a touchdown pass last week for the first time in three games with the franchise and was held to a season-low 217 yards passing by Baltimore. Goff does not have the same caliber receivers he did with the Los Angeles Rams, but he has also thrown a lot of errant passes that have stunted drives and gains for a team that has a razor thin margin of error.

BEARS PLAYER TO WATCH: The big question for the Bears this week: Who will start at quarterback? Coach Matt Nagy said Friday the Bears will wait until game time to announce if they will go with Andy Dalton or Justin Fields. Fields struggled last week in his first NFL start, with Dalton sidelined because of a bone bruise in his left knee. Fields also hurt his right thumb during the game, though he was a full participant in practice during the week while Dalton was limited.

KEY MATCHUP: Bears WR Allen Robinson against Lions CBs Bobby Price and Amani Oruwariye. Robinson has given the Lions trouble in his career, with 36 catches for 509 yards in seven games.

KEY INJURIES: Lions LB Trey Flowers was inactive last week with shoulder and knee injuries, and those ailments kept him out of practice Wednesday. ... Bears LB Khalil Mack missed part of last week's game because of a sprained foot before returning in the second half. ... LB Danny Trevathan and NT Eddie Goldman could return from knee injuries.

SERIES NOTES: The Lions lost five straight to Chicago before winning at Soldier Field last season. That came on the heels of a major shakeup in which Detroit fired general manager Bob Quinn and coach Matt Patricia. The loss capped a six-game losing streak for the Bears, who then won three straight to help push them to the playoffs.

STATS AND STUFF: Detroit’s first-year general manager and coach, Brad Holmes and Dan Campbell, have not won as leaders of the franchise. ... The Lions have lost seven straight since winning at Chicago last season with interim coach Darrell Bevell. ... Detroit rallied to take the lead against Baltimore last week with 1:04 left, then let the Ravens convert a fourth-and-19 on a pass before Justin Tucker made an NFL-record, 66-yard field goal that bounced off the crossbar as time expired. ... RBs D’Andre Swift and Jamaal Williams combined for 89 yards rushing and two TDs on 26 carries — and nine receptions for 85 yards — against Baltimore. ... TE T.J. Hockenson was held to 10 yards receiving and two receptions last week after entering the game tied for the league lead with 16 catches. ... WR Kalif Raymond had a career-high six receptions against Baltimore. ... DE Charles Harris has a sack in each of the past two games. ... The Bears had the second-fewest yards of net offense in franchise history (47) and ninth fewest in NFL history. ... Chicago is tied for the league lead with 15 sacks allowed ... Fields, the No. 11 overall draft pick, got sacked nine times for 67 yards while throwing for just 68 on 6-for-20 passing last week. ... Bears RB David Montgomery is fifth in the NFL with 203 yards rushing. ... LB Robert Quinn is tied for fourth in the league with four sacks after finishing with just two in 15 games last season.

FANTASY TIP: Swift is worth a start, especially in point-per-reception leagues, with 19 receptions to rank second among NFL RBs. He is also fourth at the position with 289 yards from scrimmage.