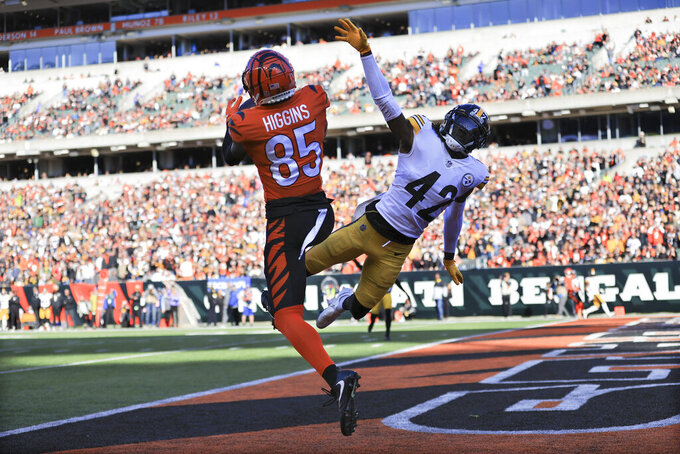 However, it was a fierce ground game that powered the past two big wins.

Running back Joe Mixon has had back-to-back 100-yard games for the first time since 2019, including a career-best 165 yards in Cincinnati's 41-10 pounding of the Pittsburgh Steelers on Sunday. He has rushed for four touchdowns in those two wins, with the offensive line making generous lanes for his runs. The fifth-year back is averaging close to 5 yards per carry.

Coach Zac Taylor said the run game is the focus right now because it's working.

“We certainly feel great about the passing game, as well,” Taylor said. “But if it's not broke, we're certainly going to keep sticking with it.”

Not that Burrow isn't still contributing in a big way. He was an efficient 20 for 24 for 190 yards in the Steelers win, tossing a beautiful 32-yard TD pass to Tee Higgins in the second quarter.

Burrow also scrambled from 8 yards and stretched out for a crashing goal-line dive in the first quarter to open the scoring for the Bengals, who built a 31-3 lead at the half on the way to the first season sweep of the Steelers since 2009.

Cornerback Mike Hilton, who played for the Steelers for the first four years of his career, picked off Ben Roethlisberger's pass and returned it for a 24-yard TD late in the first half. Eli Apple also had an interception, and the Bengals sacked the 39-year-old Roethlisberger three times.

“We're right where we want to be,” Burrow said. “We have high aspirations this year. We can't let up now. We started out strong then we kind of skidded a little bit there in the middle of the season. Now, coming down the stretch, I think we're really hitting our stride.”

The revitalized ground game is allowing the Bengals to take some of the pressure off Burrow. Cincinnati rushed for 198 yards and passed for 190 against the Steelers.

A relatively minor point, but Cincinnati gave up its biggest chunks of yardage on longer passes by Roethlisberger or runs after catches. Roethlisberger had separate completions to Chase Claypool of 41 and 30 yards. Fortunately for Cincinnati, the big plays were few.

After struggling with a foot injury that forced him to miss the last 10 games of 2020, Mixon is regaining the form that led to 1,000-yard seasons in 2018 and ‘19. He’s got 924 yards and a career-high 11 rushing touchdowns in 2021, along with another 192 receiving yards and two TDs. He has a touchdown in eight consecutive games, including five straight with rushing TDs. He has two rushing touchdowns in each of the past three games. The 25-year-old thinks he's coming into his prime.

“He's a big burst of energy for us as a team and as an offense,” Burrow said.

Ja'Marr Chase leads NFL rookie receivers with eight touchdowns, but has hit a bit of a drought. He had three catches for 39 yards Sunday, and also had an offensive pass interference penalty. He has 12 catches and one touchdown in the past three games.

The Bengals could be in a bit of trouble if leg injuries to offensive linemen Riley Reiff and Trey Hopkins cause them to miss significant time. Both have been anchors of a much-improved O-line. Taylor said the injuries didn't seem to be serious.

23 — yards gained by Steelers running back Najee Harris, a season low for the rookie. He had just eight carries as Pittsburgh was forced to play from behind. The team was limited to 51 rushing yards.

The Bengals are honing a more balanced attack, which will be necessary if they hope to emerge with their first playoff appearance since 2015. Cincinnati hosts the Los Angeles Chargers (6-5) on Sunday.