Bengals get a gratifying complete game, gear up for Ravens 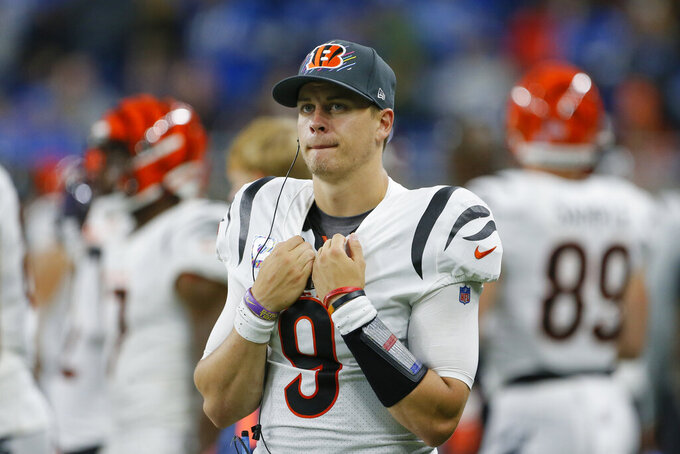 Cincinnati Bengals quarterback Joe Burrow stands on the sideline during the second half of an NFL football game against the Detroit Lions, Sunday, Oct. 17, 2021, in Detroit. (AP Photo/Duane Burleson)

CINCINNATI (AP) — Joe Burrow chalked up another first in his promising NFL career — resting on the sideline in the second half because his team had a comfortable lead.

The second-year Cincinnati Bengals quarterback was all smiles Sunday watching backup Brandon Allen put the finishing touches on a 34-11 rout of the winless Detroit Lions.

For a change, Cincinnati (4-2) scored on its first possession and also played a solid second half. The win was gratifying for a team that let a close one slip away at home to Green Bay on Oct. 10 and now has to go to Baltimore to play the AFC North-leading Ravens on Sunday.

“We all have to step on people's necks when we need to,” rookie receiver Ja'Marr Chase said afterward. “I think we did a good job of that today.”

Burrow was 19 for 29 for 271 yards and three touchdowns with an interception. The top overall draft pick in 2020 has at least two touchdown passes in each of the Bengals first six games this season. Running back Joe Mixon had 18 carries for 94 yards, and caught five passes for another 59 yards and a touchdown.

“It's always important to bounce back after a loss,” said linebacker Logan Wilson, who had his fourth interception of the season. “We came in here and we did what we needed to do, what we were supposed to do, what we planned on doing.”

Burrow has got the offense clicking, distributing passes to six different receivers in the Detroit win. Rookie running back Chris Evans caught a touchdown pass and is making a bid for more playing time. Tight end C.J. Uzomah has developed into a reliable go-to option.

Burrow is still vulnerable to the pass rush. After being battered by the Packers and having his throat bruised, he was hit five times and sacked twice against the Lions. He's playing on a surgically repaired left knee, and Cincinnati is still trying to figure out how to provide him better pocket protection. That will get even tougher this Sunday in Baltimore.

Chase just keeps getting better. He had four receptions for 97 yards against the Lions and his downfield block on safety Will Harris helped clear the way for the 40-yard Mixon TD after a catch in the third quarter. Chase had a 34-yard grab on third-and-long that set up Evan McPherson's field goal late in the first half.

“Ja'Marr just keeps being that spark for us,” Burrow said. “He keeps finding these opportunities.”

The right guard position. Rookie Jackson Carman was on the reserve/COVID-19 list last week and didn't practice until Friday. The Bengals started rookie Trey Hill, who was benched after two penalties in the first quarter. Carman came back in but was taken to the locker room with an illness in the third quarter, the team said, and Hill went back into the game. It's not clear who will play this week.

5: Catches of 40 yards or more this season by Chase. That's the most in the NFL.

Cincinnati must carry momentum into a key matchup with the Ravens (5-1), who are coming off a 34-6 rout of the Los Angeles Chargers. The Baltimore defense that confounded Justin Herbert and bottled up the run game could cause trouble for the Bengals offensive line.