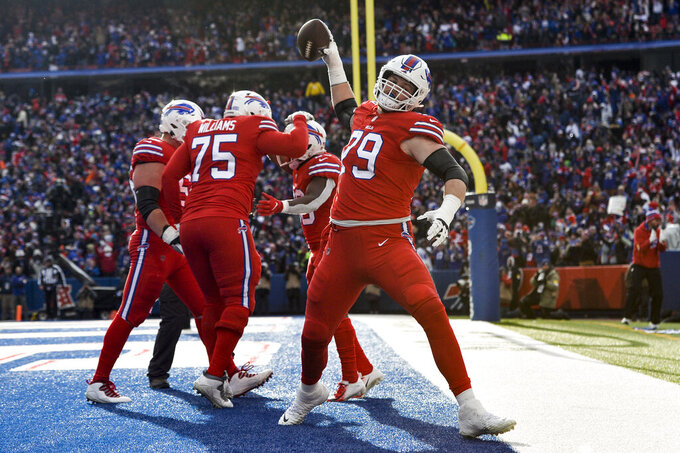 That was the resounding message from several Bills players not long after a 31-14 win over Carolina on Sunday, in which Buffalo snapped a two-game skid by padding its record against yet another flawed opponent with a losing record, starting a backup quarterback and having lost its kicker to injury an hour before kickoff.

“We’re just trying to find ways to win games, and we did that today,” quarterback Josh Allen said before looking ahead to playing at New England this weekend. “And we’re going to need that going forward.

"We all know who we have next week. It’s no secret.”

By beating Carolina, coupled with the Patriots (9-5) losing to Indianapolis, the Bills (8-6) find themselves back in contention to win the AFC East for a second straight season.

Despite a 14-10 loss to New England at home in blustery conditions two weeks ago, Buffalo needs only to sweep its final three games to claim the division because it will have split its season series against the Patriots and would have the tiebreaking edge against AFC East opponents. Both are currently 3-1, with the Patriots having lost their season opener to Miami.

“I know guys will be excited, honestly, based off what happened last time, just to have another go-around with them,” linebacker Tremaine Edmunds said.

And yet, be careful what you wish for, might also serve as words of warning for Buffalo, which is still 7-36 against the Bill Belichick-coached Patriots despite sweeping the season-series last year.

The Bills have yet to prove they’ve shaken their prevalent inconsistencies in winning just four of their past nine.

This is also a team which is 1-5 against opponents entering Week 16 with plus-.500 records. Buffalo's lone victory came against Kansas City (10-4) in Week 5, which just happens to be the last time the Bills won consecutive games.

If there is a bright side, the Bills are driven by memories of their loss to the Patriots, after which they faced questions about being embarrassed at home by an opponent which attempted just three passes, while gaining 222 yards on 46 carries.

Just don't remind safeties Micah Hyde and Jordan Poyer, who were unhappy over the postgame line of questioning two weeks ago.

“Yeah, we're excited to play them,” is all Poyer had to say on Sunday.

Then there's coach Sean McDermott who, on Monday, clarified comment he made following the loss two weeks ago, when suggesting not to provide Belichick too much credit. He now says he was referring to the Bills beating themselves.

“Yeah, 100% of where we fell short and what we could've done better,” McDermott said. “One hundred percent respect for coach Belichick and it's really just focused on us.”

The Bills' run defense has allowed a combined 510 yards over its past three, after giving up 151 to the Panthers. On the bright side, Buffalo limited Carolina to convert just one of five fourth-down opportunities.

On offense, questions revolve around a patchwork and COVID-19-depleted offensive line, which allowed four sacks. By comparison, the line succeeded in helping running back Devin Singletary gain a season-best 86 yards rushing and score the opening touchdown on a 16-yard run in the second quarter.

WR Gabriel Davis. The second-year player scored a career-best two TDs against Carolina while filling in for Emmanuel Sanders, who was sidelined by a knee injury. Davis now has six touchdowns this season, and 13 overall on 64 career catches.

OL Spencer Brown. Making the shift from right tackle to left tackle to fill in for Dion Dawkins (reserve/COVID-19 list), the rookie was flagged five times in having difficulty handling the Panthers pass rush.

Dawkins and starting RG Jon Feliciano are on the reserve/COVID-19 list, and their status is uncertain. Backup DE A.J. Epenesa and practice squad members OL Bobby Hart and DE Mike Love landed on the COVID-19 list on Monday. Sanders is week to week with a knee injury.

1-6 — Buffalo's record when trailing at any point of a game this season. They were 7-3 in that category last year.

Buffalo’s chances of staying in a tightly contested AFC playoff picture, featuring 12 teams with seven or more wins, could very well hinge on the outcome Sunday.