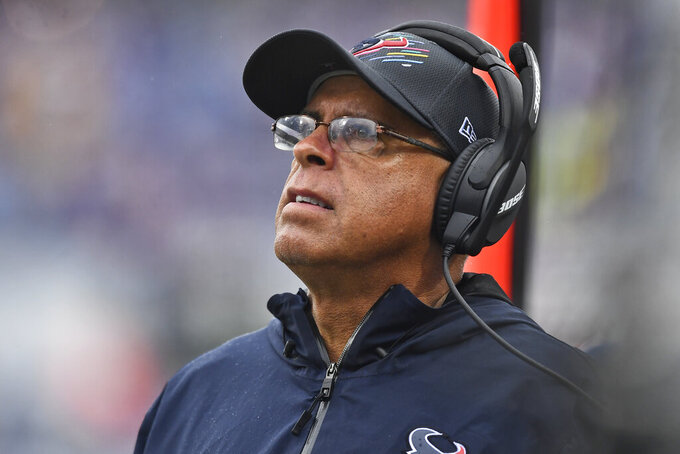 Houston Texans head coach David Culley looks on during the first half of an NFL football game against the Buffalo Bills, Sunday, Oct. 3, 2021, in Orchard Park, N.Y. (AP Photo/Adrian Kraus)

ORCHARD PARK, N.Y. (AP) — Defensive end Jerry Hughes and the Buffalo Bills' defense made it clear from the beginning.

If rookie quarterback Davis Mills and the Houston Texans couldn’t score on four snaps from Buffalo’s 13 off Josh Allen’s interception, what chance would they have the rest of the game?

None, it turned out.

Hughes tipped Mills’ screen pass for an incompletion, forcing the Texans to turn over the ball on downs at Buffalo’s 6 five minutes into the game, and the Bills forced five turnovers in a 40-0 win on Sunday.

“Whether they give it away on the 30-yard-line or the 1, we’ve got to go out and try to make a stop,” safety Micah Hyde said. “We got playmakers all over the field, so any time we can hold them to no points, it’s pretty awesome.”

Allen was relieved the defense bailed him out after he sailed his first attempt over the middle and it was intercepted by Lonnie Johnson Jr.

“That’s huge for the defense to bow up like that. Really, I’m hoping, ‘Let’s hold them to a field goal,’” Allen said. “It gives us a lot of confidence for sure.”

While the Bills' offense struggled to find its footing on a rain-slicked field, their defense held its ground.

Hyde, Tremaine Edmunds, Tyler Matakevich and Jaquan Johnson each had interceptions, while Cam Lewis forced a fumble as Buffalo overwhelmed Mills in his second career start.

The Bills limited Houston to 109 yards of offense — 8 in the first half — and six first downs to post their second shutout in three weeks. Buffalo, which blanked Miami 35-0 on Sept. 19, has two shutouts in a season for the first time since 1990.

And Buffalo did it with Johnson starting in place of veteran safety Jordan Poyer, Lewis filling in for injured cornerback Taron Johnson, and Matakevich replacing linebacker Matt Milano, who was sidelined by a hamstring injury in the second quarter.

“Those guys were ready,” Edmunds said of Buffalo’s backups. “Guys were able to make plays, not just being out there but making plays that dictated the game. I know it has to feel good. They put the work in. So I’m not even surprised.”

The Bills (3-1), coming off a 43-21 win over Washington, have won three straight since a season-opening loss to Pittsburgh.

Houston (1-3) dropped its third straight, the skid coinciding with starter Tyrod Taylor being sidelined with a hamstring injury in a 31-21 loss at Cleveland in Week 2.

Mills, a third-round selection out of Stanford, was in over his head against a defense that improved to 10-0 in its past 10 meetings against quarterbacks with 16 or fewer starts.

“That’s one of the most embarrassing losses I’ve ever had,” linebacker Kamu Grugier-Hill said. “We’re all embarrassed. We’re not happy with this at all. But we are going to come in and correct. We are going to fix this.”

Houston’s defense did its part in holding Buffalo to 19 points — a touchdown and four field goals — through three quarters before finally caving. The offense was the bigger problem in the most lopsided loss in franchise history.

Mills, who finished 11 of 21 for 87 yards, kept repeating he didn’t play his best football, and closed his news conference by saying, “There’s only up from here.”

First-year coach David Culley blamed himself, saying: “First off all, I didn’t have them ready to play.”

He also came to Mills’ defense.

Allen finished 20 of 29 for 248 yards with two touchdowns — a 25-yarder and a 1-yarder, both to Dawson Knox — and an interception before giving way to backup Mitchell Trubisky with 8:03 remaining.

Zack Moss scored on a 2-yard run, and Trubisky closed the scoring with a 4-yard TD run as Buffalo scored 40 or more points in consecutive weeks for the second time in team history, and first since 1990.

Buffalo became the NFL’s first team since the 2009 New York Jets to have two shutout wins by 35 or more points in a season. The Bills became the NFL’s third team to post two shutouts through the first four weeks of the season, joining Baltimore in 2000 and Washington in 1991.

Buffalo’s 44 points allowed through four weeks are its second fewest after giving up 40 during the first four games of the strike-shortened 1982 season.

Allen’s second TD pass to Knox was his 103rd career TD (passing, rushing, receiving), moving him one ahead of Jack Kemp for third on the franchise list among quarterbacks.

Ka’imi Fairbarin was limited to kickoff duty in his season debut after missing the first three weeks with a groin injury.

Bills: At Kansas City next Sunday in a rematch of the AFC championship game, which the Chiefs won 38-24.