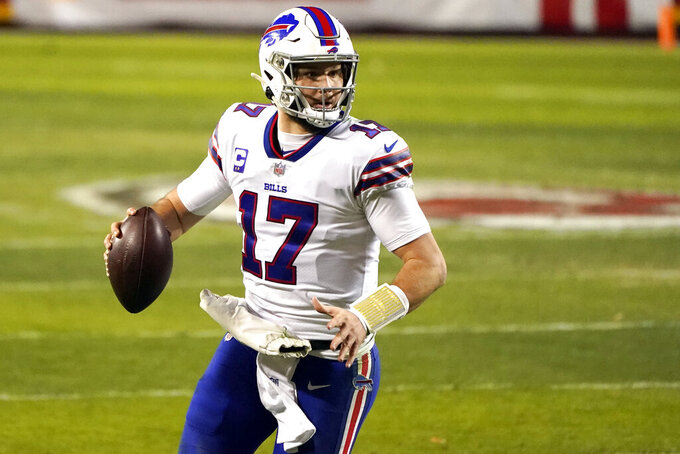 FILE - In this Jan. 24, 2021, file photo, Buffalo Bills quarterback Josh Allen looks to throw a pass during the first half of the AFC championship NFL football game against the Kansas City Chiefs in Kansas City, Mo. Bills general manager Brandon Beane faces making two critical high-priced decisions by Monday, May 3, 2021, in determining whether to commit some $35 million in combined salary to pick up the fifth-year options and retain the rights of quarterback Josh Allen and middle linebacker Tremaine Edmunds through the 2022 season.(AP Photo/Charlie Riedel, File)

The Bills on Monday exercised the fifth-year options of both players’ contracts and retained the 2018 first-round draft picks through the 2022 season. The move comes at a combined price of about $36 million, with Allen set to make nearly $23 million in his final year.

The fifth year of the contracts is guaranteed, though the Bills can renegotiate the deals.

General manager Brandon Beane had raised concerns how he’ll fit both contracts under a slow-growing salary cap. The key now becomes negotiating extensions before the fifth-year options kick in for next season.

“It’s not an ideal scenario for that to pick them both up and not extend them,” Beane said a week before the draft. "So we just got to kind of figure out how we can make that work in our system.”

The salary cap has become a larger issue after its projected growth was stalled by the economic effects of the novel coronavirus pandemic.

Beane was required to be creative this offseason in retaining three key starters in linebacker Matt Milano and offensive linemen Jon Feliciano and Daryl Williams despite the salary cap shrinking to $182.5 million. He’ll face an even bigger challenge to retain his core players next year, with the Bills currently featuring 26 players eligible to become unrestricted free agents.

Allen and Edmunds represented the cornerstones of the future when selected in the first round of the 2018 draft. Beane used a stockpile of draft picks he accumulated by maneuvering Buffalo up the order.

Buffalo moved up five spots to select Allen at No. 7, and then jumped from 22nd to 16th to draft Edmunds.

Allen was the third of five quarterbacks selected in the first round in 2018 and has established himself as among the best of the class, which included Cleveland’s Baker Mayfield, who was taken first overall, and Baltimore’s Lamar Jackson (32nd).

In three years, Allen has shed criticism of being erratic during his two final college seasons at Wyoming.

Allen’s production has jumped in each of his three seasons, with his completion percentage rising from 52.8 in 2018 -- an NFL low among starters -- to 69.2 last year. He’s coming off a season in which he set franchise records with 37 touchdowns passing and 46 combined TDs, 4,544 yards passing, 396 completions, and was part of an offense that scored a team-best 501 points.

Behind Allen, Buffalo won its first AFC East title since 1995 and made its deepest playoff run in 27 years before losing the conference championship game to Kansas City.

Edmunds was 19 when he was drafted out of Virginia Tech, and has been a three-year starter. The Bills value his 6-foot-5, 250-pound frame and speed. He’s topped 110 tackles in each of his three seasons, and has 5 1/2 sacks, three interceptions and forced two fumbles in 47 career games.

Inconsistency at times has been an issue, with Edmunds sometimes getting caught out of position.

Beane already had preliminary contract talks with Allen’s representatives, and hasn’t ruled out negotiating an extension within the year.

“Listen, we would love to get Josh extended. No doubt. It has to be a number that works for him and works for us,” Beane said. “Josh wants to be here. That gives me hope we’ll get something done at some point. I can’t guarantee you it will be this year.”

Beane said the key is to be patient and allow negotiations to progress naturally.

“You can’t force it. It happens when it happens,” he said. “If it happens this year, great. If it doesn’t, I’ll be very positive that we’ll get it done next year.”

Allen is eager to stay. “If they called up and wanted to talk tomorrow, I’d be willing,” Allen told The Ringer podcast last month. “But we’ll see. We’ll cross that bridge when we get there.”