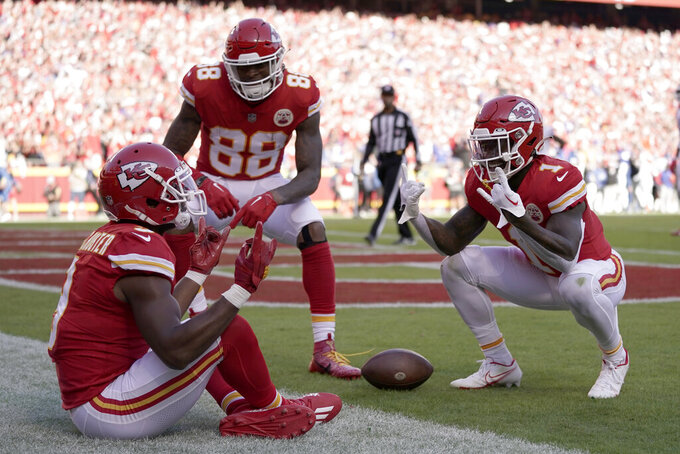 Kansas City Chiefs wide receiver JuJu Smith-Schuster is congratulated by teammates Jody Fortson (88) and Jerick McKinnon (1) after scoring during the first half of an NFL football game against the Buffalo Bills Sunday, Oct. 16, 2022, in Kansas City, Mo. (AP Photo/Ed Zurga)

KANSAS CITY, Mo. (AP) — Von Miller had just finished talking about the importance of the Buffalo Bills beating the Kansas City Chiefs at Arrowhead Stadium when he stopped in the hallway outside the visiting locker room and grabbed Josh Allen in a hug.

The Bills quarterback was masterful again on Sunday.

This time, it was in a winning effort.

Allen threw for 329 yards and three touchdowns, including the go-ahead toss to Dawson Knox with 1:04 left, and the Bills held on for a 24-20 victory to exact a measure of revenge for their epic overtime loss to Patrick Mahomes and the Chiefs in last year's playoffs.

“I've come to this stadium a whole bunch of times. Been at this same podium. But I ain't have many smiles,” Miller said. “It just feels so good to go out there with my teammates, to work toward something like this and come out on top.”

Stefon Diggs had 10 catches for 148 yards and a touchdown, and Gabe Davis also had a TD catch after torching Kansas City for four of them in January, as the Bills (5-1) won in the same place their season had ended the past two seasons.

It was the divisional round in January. It was the AFC championship game the year before that.

“Nothing we did last year translates to what we're doing this year,” Allen said with a shrug. “What happened in the past, that's where it is. All we can do is focus on the next one. Today was the next one.”

For a moment, it looked as if it could be the next heartbreak.

The Chiefs got the ball back after Knox's touchdown with plenty of time left. But after Mahomes misfired on first down, Buffalo cornerback Taron Johnson jumped his pass to Skyy Moore and picked him off with 51 seconds left.

The Bills ran out the clock from there.

“It was a great battle. You love these games,” Chiefs coach Andy Reid said. “You just don't want to be sitting on this end of it. But you love the competition and the way the guys get after it.”

Mahomes finished with 338 yards passing to go with two touchdowns and two interceptions, including one in the end zone early in the game. JuJu Smith-Schuster had five catches for 113 yards and a touchdown.

The down-to-the-wire nail-biter was a fitting follow-up to their playoff game, when the teams combined to score 25 points in the final two minutes of regulation, and the Chiefs (4-2) won it on the first possession of overtime.

The teams scored on their final six possessions that night, and they picked up Sunday right where they left off — with a small caveat. The Bills and Chiefs both marched the length of the field in the first quarter, chewing up defenses that looked downright lost, only to turn the ball over when they reached the red zone.

Then the similarities to their incredible divisional playoff game really began.

Mahomes, at his improvisational best, stayed alive long enough in a collapsing pocket to find Smith-Schuster for a 42-yard TD reception. And after the Bills blew another red-zone opportunity, when Allen threw incomplete on fourth-and-goal at Kansas City's 3, Buffalo answered with a touchdown drive in the final minute of the half.

Backed up to its own 1-yard line, Allen threw a dart to Davis for a first down. He hit Knox, Diggs and Khalil Shakir on his next three throws, then had Davis beat rookie cornerback Joshua Williams for a 34-yard TD catch.

And just like January, the Chiefs answered in seconds. Only instead of using 13 to drive within range of Harrison Butker's 49-yard field goal to force overtime, they had 16 seconds to move 27 yards and set up his 62-yarder to knot the game.

The back-and-forth continued in the second half: Buffalo took the lead after Butker's 51-yard miss when Diggs hauled in a long TD catch, then Kansas City drove 83 yards and Mecole Hardman tied it with his short reception.

When the Bills failed on another fourth-down attempt, Butker added a 44-yarder to give Kansas City a 20-17 lead.

But unlike January, the Bills made the plays down the stretch.

Allen's scrambling, hurdling run on their go-ahead drive got them in scoring position, and his throw to Knox — a pinpoint dime along the sideline — gave the Bills the lead. And when Johnson came up with his interception a few minutes later, the Bills had their long-awaited revenge in Kansas City.

“There were still some bad memories from this place last year,” Knox said, “so it was nice to wipe those from our minds.”

Bills safety Jordan Poyer, who missed last week's game against Pittsburgh with a rib injury, was medically cleared to play but not to fly. So, he drove 973 miles each way — about 15 hours in the car — to be on the field Sunday. Poyer wound up making four tackles in the game.

Allen had a career-best 13 straight completions before missing on his first throw of the fourth quarter. ... Miller had two sacks, giving him 16 in 19 games against Kansas City. ... Chiefs DT Chris Jones, who had a controversial roughing-the-passer penalty last week, tripped Allen for a sack in the fourth quarter. ... Chiefs TE Travis Kelce had eight grabs for 108 yards.

Bills: RT Spencer Brown (ankle) was carted off in the second quarter. CB Dane Jackson left with a stinger in the third.

Bills: Off next week before facing the Packers on Oct. 30 in Buffalo.

Chiefs: Visit the 49ers next Sunday in their final game before their bye.