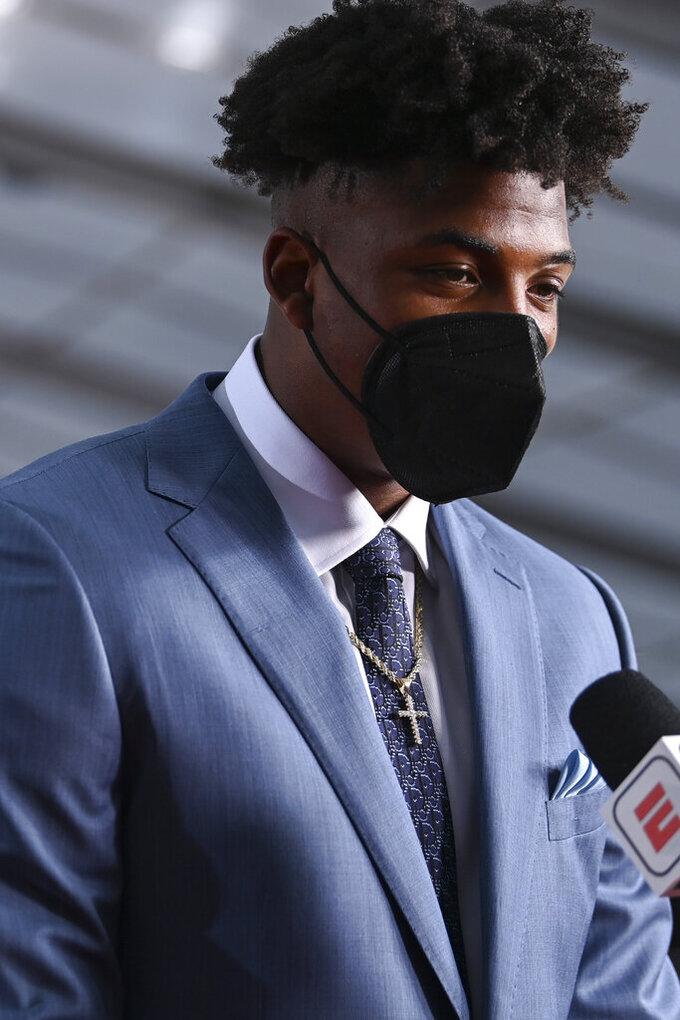 Add in an eagerness to continue learning, and that was enough for Beane to address Buffalo's key offseason need in selecting Rousseau with the 30th pick in the NFL draft on Thursday night.

“We think Greg is on the come, a rising player that will continue to grow into his body,” Beane said. “He still has some rawness to his game. But we like who he is, and we think he’s a guy who, in time, will reach his potential.”

Rousseau, however, was considered a bit of an unknown after playing only one full college season before opting out last year amid COVID-19 concerns. He was also new to the position after playing safety and receiver in high school, before making the switch to defensive end upon entering Miami. He was limited to playing just two games during his freshman season before breaking his ankle in 2018.

What stood out for Beane was what he saw from Rousseau on tape in how he used his length to disrupt opposing quarterbacks.

"For a one-year player, he’s got a knack for getting to the quarterback,” Beane said. “Greg is an instinctive player. He’s just a young player that we think has a ton of upside.”

With Josh Allen having solidified his future at quarterback, defense was considered a priority entering the draft after the Bills addressed mostly offensive needs over the past two months. Except for re-signing starting linebacker Matt Milano to a four-year contract, Buffalo used its limited salary cap on bringing back starting offensive linemen Jon Feliciano and Daryl Williams, and adding receiver Emmanuel Sanders to offset the loss of John Brown.

The Bills finished 15th in the NFL with 38 sacks, and tied for 20th with 143 quarterback pressures. The team also needs to get younger at the position, with its top two edge-rushers, Jerry Hughes and Mario Addison, both going to be 33 or older and entering the final season of their contracts.

Beane identified upgrading Buffalo’s pass rush as a priority immediately following the season, and said it became even more important with division rivals New England and the New York Jets selecting quarterbacks in the first round on Thursday.

The Jets drafted Zach Wilson with the No. 2 pick, while the Patriots choose Mac Jones at No. 16.

Rousseau was thankful in the confidence the Bills showed in him, and eager to continue his development.

“I’ve been working the whole time. I really didn’t take any time off,” he said, referring to last year. ” I feel I’m going to be ready to come in and prove I’m there for a reason.”

His parents lived in Buffalo in the mid-1990s, and his older brother Marvin was born in the city.

“I know all about it. Jim Kelly, the whole nine yards,” Rousseau said of the Bills Hall of Fame quarterback, who also attended Miami.

This marks the third consecutive draft in which the Bills selected a defensive player with their first pick. Tackle Ed Oliver was selected 9th overall in 2019, followed by end A.J. Epenesa chosen 54th last year.

The Bills are coming off a breakthrough season in which they won their first AFC East title since 1995 with a 13-3 record, and made their deepest playoff run in 27 years before losing to Kansas City in the conference championship game.

Buffalo was led by Allen, who began delivering on the potential the Bills brass showed in trading up five spots in the draft order to select the raw and sometimes erratic Wyoming product with the No. 7 pick in 2018. Allen earned MVP consideration following a season in which the second-team All Pro selection set numerous franchise single-season passing and scoring records.

UP NEXT: Barring trades, the Bills have second- and third-round picks on Friday at 61st and 93rd overall.