Bills wake up in second half to beat Dolphins 26-11 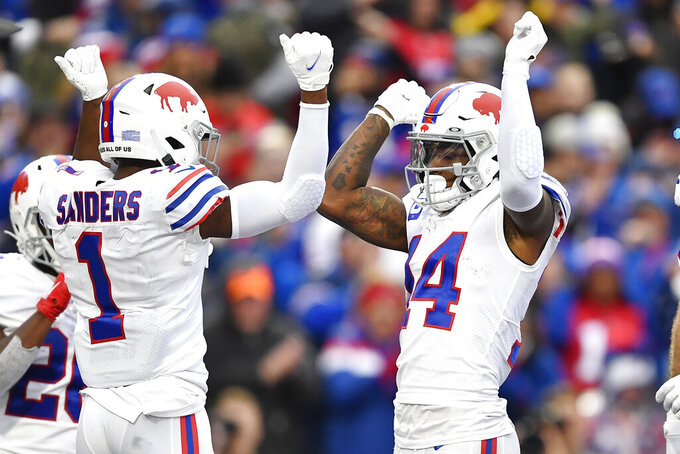 Buffalo Bills wide receiver Stefon Diggs (14) celebrates with Emmanuel Sanders (1) after his touchdown during the second half of an NFL football game against the Miami Dolphins, Sunday, Oct. 31, 2021, in Orchard Park, N.Y. (AP Photo/Adrian Kraus)

Call it what you want, all that mattered was Allen finally finding his groove in time to pull out a 26-11 victory over the Miami Dolphins on Sunday.

“Really, that’s the biggest takeaway from this game is you’re not always going to come out and score, score, score,” McDermott said. “So this game, like most games in the NFL, it comes down to the fourth quarter, and I thought that was good for us a team. Now we’ve got to build on it.”

It took a little over a half for Allen to shake off the rust from a bye week break before leading Buffalo to score 23 points over its final four possessions.

In doing so, the Bills (5-2) rebounded from a heartbreaking 34-31 loss to Tennessee on Oct. 18 by continuing their dominance over an AFC East rival. The Bills beat the Dolphins for a series-record seventh consecutive time, outscoring them by a combined 258-123 in this run.

Allen’s Zen comment was a reference to his relationship with golfer Phil Mickelson, who happens to be a long-time Bills fan and addressed the team on a Zoom call during training camp with the PGA Championship Trophy he won in May beside him.

"Lefty" was already on Allen’s mind when the quarterback arrived at the stadium on Halloween morning wearing a PGA visor, golf shirt, shorts and spikes.

“He talked about finding your Zen or your calm, and early on, I’ve known this for a long time, I don’t play well when I’m (unhappy) or frustrated,” Allen said. “I think maybe that was causing some issues early on. To that second half, just trying to find that inner peace where I can just go out there and relax.”

The Bills went ahead 10-3 in the third quarter when Allen shrugged off Jaelan Phillips’ bid for a sack and found a wide-open Gabriel Davis for an 8-yard touchdown reception. He followed up capping a nine-play, 69-yard drive by hitting Stefon Diggs on a post route for a 19-yard TD.

The Dolphins cut the lead to 17-11 on Tua Tagovailoa’s 1-yard plunge and 2-point conversion pass to Mike Gesicki early in the fourth quarter.

Allen responded by marching the Bills on a 14-play drive, which ended with Tyler Bass hitting a 39-yard field goal. Jordan Poyer sealed the victory by intercepting a pass Tagovailoa sailed over the middle while facing third-and-26 from his 19 with 2:21 remaining.

The Bills quarterback then waved good-bye to the Dolphins after scoring on a 7-yard touchdown run with 1:07 left.

The Dolphins (1-7) have lost seven straight overall to match their longest skid since losing their first seven of the 2019 season.

It’s a freefall that has left open questions regarding the future of coach Brian Flores and the status of Tagovailoa.

In reiterating his support for the second-year quarterback, Flores deflected a question about his job security.

Without going into detail, Flores revealed receiver Preston Williams did not travel with the team because of a disciplinary reason.

After losing three times on walk-off field goals this season, including their past two games, the Dolphins’ squandered a pair of scoring attempts in the first half.

Jason Sanders hit a 51-yard field goal with the wind behind him in the second quarter but missed a 36-yard attempt wide left into the wind in the first quarter.

Then came a dreadful close to Miami’s final drive of the first half. Facing third-and-5 at Buffalo’s 12, tight end Mike Gesicki was running across behind the line and had Austin Reiter’s snap bounce off his chest. Buffalo's Micah Hyde recovered the ball.

Tagovailoa finished 21 of 39 for 205 yards and an interception amid speculation on the Dolphins interest in acquiring Deshaun Watson from Houston before the NFL’s trade deadline on Tuesday. Tagovailoa’s career record dropped to 7-7.

“Obviously, it can get a little disappointing,” Dolphins defensive tackle Christian Wilkins said. “But I refuse to be miserable. I’m not going to duck my head. I’m sure that’s what a lot of people want us to do. But I’m not going to do that."

Bass opened the scoring with a 57-yard attempt, which ranks as the fourth longest in team history, and third longest at what is now called Highmark Stadium.

Bills co-owner Terry Pegula was spotted on the sideline during pre-game warmups, five days after leaving NFL meetings in New York after being deemed to have had close contact with a person who tested positive for COVID-19 at his daughter’s wedding.

Dolphins: They return home for two games, starting with a meeting against the Houston Texans next Sunday.

Bills: They continue a stretch of playing four of five games on the road with a trip to the Jacksonville Jaguars next Sunday.