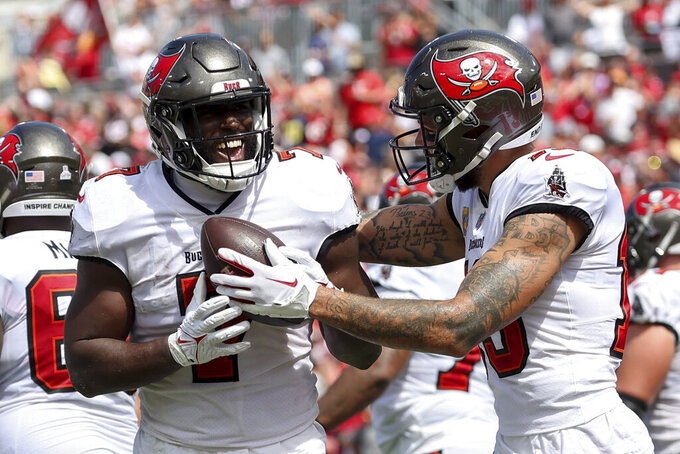 There’s one true barometer of success for a Tom Brady-led offense, and that’s whether the Tampa Bay Buccaneers score enough points to win on a particular day.

One week, attempting a season-high 52 passes while throwing for 385 yards and three touchdowns without an interception didn't get the job done in a 41-31 loss to Patrick Mahomes and the Kansas City Chiefs.

Next time out, dropping back in the pocket the same number of times and passing for 351 yards and one TD without an interception was enough to beat the Atlanta Falcons 21-15.

Sure, there’s a significant difference between facing the high-scoring Chiefs and the run-oriented Falcons.

Still, the Bucs insist the offensive philosophy doesn’t change from week to week.

The objective is to do whatever necessary to produce enough points to win, whether that’s throwing the ball a lot like Brady did the past two weeks or relying on a more balanced attack, which the Bucs tried to maintain the first three weeks of the season.

After averaging 30 points per game the past two seasons, the Bucs (3-2) are down to 20.6 through five games this year.

With Mike Evans missing one game due to a suspension and fellow receivers Chris Godwin and Julio Jones in and out of the lineup due to injuries, there has been a noticeable dip in the number of 20-yard plays on offense.

“It’s really the way teams play us," offensive coordinator Byron Leftwich said. "The teams know who we have from a personnel standpoint, especially when our guys are out there. So they try to get us to throw underneath. We don’t care, we’ll take the completion.

“We don’t care what defenses do. We’re going to make the right play all the time. If it takes us 12 plays, if it takes us five plays, it’s really irrelevant to us. We’re not trying to play a certain way. We just want to attack the defense, keep attacking the defense and score points. That’s really our process.”

Brady led scoring drives of 13 plays and 88 yards (touchdown), 13 plays and 84 yards (field goal) and 11 plays and 74 yards (TD, 2-point conversion) on the way to take a 21-point lead early in the fourth quarter against the Falcons on Sunday.

The running game, however, has been inconsistent and the offense contributed to the Falcons getting back in the game by going three-and-out on three of their last four possessions.

Brady said the unit remains a work in progress.

“We’re not nearly at the point where we’re capable of being, and we need a lot of people to step up,” Brady said. “We (have) to get people out there playing (and consistently healthy). We’ve got to keep practicing, get together, make the corrections, and try to continue to improve.”

While the rushing attack has been inconsistent, RB Leonard Fournette continues to be a big part of the offense's success. He had 24 touches and scored two touchdowns against the Falcons, running for 56 yards on 14 carries and catching a team-high 10 passes on 11 targets for 83 yards. He had a TD run and reception.

The offense hasn’t been as efficient on third down as the Bucs would like. They were 9 of 16 (56.3 percent) against Atlanta — 1 of 4 in the fourth quarter, when they were trying to put the game away.

Backup RB Rachaad White got more playing time on offense than usual against the Falcons, finishing with five rushes for 14 yards and three receptions for 28 yards. Bowles has been saying he’d like to get the rookie more involved.

The defense held the Falcons in check until the fourth quarter, when Bowles felt missed tackles and fatigue began to take their toll. Atlanta finished with 151 yards rushing, with QB Marcus Mariota leading the way with 61 yards on seven attempts. The Bucs yielded 189 yards on the ground the previous week against Kansas City.

TE Cameron Brate (concussion) and WR Julio Jones (knee) were inactive against the Falcons. ... CBs Carlton Davis (hip) and Sean Murphy-Bunting (quad) left the game with injuries that also will be evaluated as the week progresses.

11 — Brady improved to 11-0 all-time against the Falcons, including one of his seven Super Bowl victories. John Elway (11-0 vs. New England) and Andrew Luck (11-0 vs. Tennessee) are the only quarterbacks in the Super Bowl era to face an opponent as many times without losing.

The Bucs hit the road the first time in four games, visiting the Pittsburgh Steelers on Sunday.