Brees: Saints will have a "good quarterback competition" 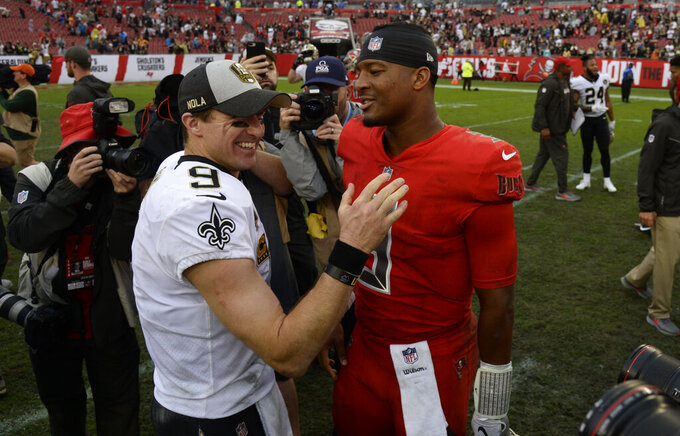 NEW ORLEANS (AP) — Drew Brees predicts a “pretty good quarterback competition” among the two front runners to replace him with the New Orleans Saints that will “bring out the best in both of them.”

“I’m really excited for the opportunity that both Taysom Hill and Jameis Winston have,” Brees said Wednesday while participating on a conference call to discuss his new job as a college and pro football commentator at NBC. "I can’t tell you how much fun we had together as a quarterback room, really a great group of guys, a great group of human beings.

“It was highly competitive. At the same time, we were there to support one another and help one another because we just wanted the team to win,” Brees added. “I’ve seen so much growth and maturity from both of those guys."

Brees will enter the broadcast booth as an analyst for NBC's broadcasts of Notre Dame games. He'll also serve on a panel of studio analysts for nationally televised prime-time NFL games on NBC, namely on “Football Night in America."

The move to broadcasting follows a record-setting, 20-year NFL career, including the past 15 seasons with New Orleans.

“I’m interested to dive back into college football and understand the style that’s being played," Brees said. "More so now than ever, you see this crossover of NFL and college. You’ve got coaches that are jumping back and forth, and I think you have the styles of play that are beginning to mimic each other because you have quarterbacks going from college football into the pros and they’re so versatile, they’re so athletic. They can do so many things that you see these offenses in the NFL skew more towards really catering towards the skill set of those players coming from college.”

Brees lost his only two games at Notre Dame when he was Purdue's quarterback.

“Both games, in my opinion, we should have won and somehow, someway Touchdown Jesus got us in the end,” Brees said. “There’s no question that that is really one of the epicenters of college football. The history and the nostalgia that exists there and I think just what that place represents to so many people, it is a special place.

“I will be impartial for every game with the exception of the Purdue game."

Brees said his goal as a broadcaster is to be himself and give fans “a glimpse into how I see it, how I process it.”

The 42-year-old Brees is the NFL’s career leader in yards passing with 80,358, although that mark will be under threat next season by 44-year-old Tom Brady, who has 79,204 career yards passing. Brees’ 571 career touchdown passes rank second behind Brady’s 581.

While Brees called thumb and rib injuries the past two seasons “frustrating,” he that that he probably could have continued playing from a physical standpoint.

"But I’m also looking at my kids, my family, the age of my kids, and just gauging all of those things. There’s a balance,” Brees said. “I felt that it was time.”

“When I put those headphones on and I started seeing the game from that vantage point and then beginning to talk about it, it was like the lightbulb went on, and I said, ‘Man, I can do this and I would love it and I think I could be really good at it,'” he recalled.

Brees said he'll remain busy with community service and other projects in New Orleans. He highlighted his involvement in the acquisition of an abandoned amusement park that was heavily damaged by Hurricane Katrina in 2005, with plans to convert the land into a nonprofit urban faming project.

“We will always have a strong presence in New Orleans. I have more things going on in the city of New Orleans right now than I have since we’ve been there.”