Bridgewater convinced Broncos; now he's out to win over fans 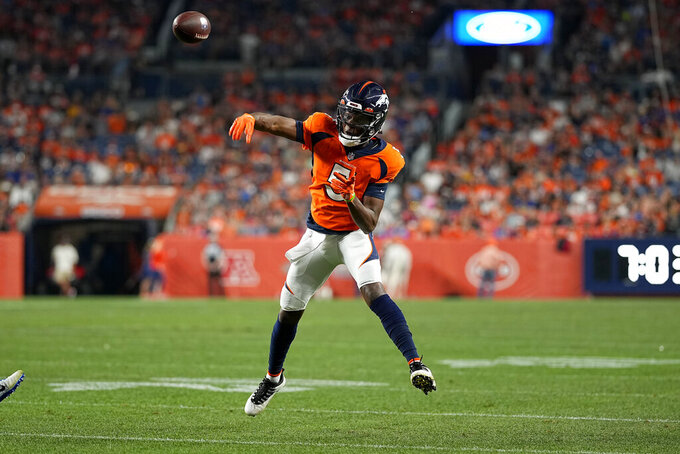 ENGLEWOOD, Colo. (AP) — First, Teddy Bridgewater won over his teammates. Then he convinced his coaches. Now, he's out to coax the Denver Broncos' fans into his corner.

“I think you win the fans over by winning football games,” Bridgewater said Wednesday.

A sizeable chunk of the team's fanbase was rooting for the incumbent or even for the Broncos to bring in a flashier name like Deshaun Watson or Aaron Rodgers to fast-track their return to contention after four straight losing seasons.

They're a skeptical bunch after watching the Broncos churn through so many failures, flops and fill-ins during the last five seasons.

Bridgewater's powers of persuasion will be called upon again beginning with the Broncos' opener Sunday against the New York Giants at the Meadowlands.

“I’ve never been the guy to try to win the fans over with my words,” Bridgewater said. “It’s just I try to be who I am, a genuine guy, be the same person every day. And hopefully my play can be enough.”

It was that humble, understated approach that helped Bridgewater ingratiate himself with his new teammates and coaches following his trade from Carolina last spring.

Bridgewater said when he takes the field at the Meadowlands he'll be “calm, cool, chill” — just like he's been his whole career.

That's the demeanor Broncos safety Kareem Jackson saw up close for the first time this summer, “and that's a great asset to have, obviously, for a quarterback.”

Bridgewater described his leadership style recently as the antithesis of the rah-rah loudmouth.

“I do it in my own way, just pulling guys aside or even post-practice,” he said. “For me, a lot of my way of demanding things out of guys happens post-practice because it’s easy to do it when we’re out here with the coaches. The coaches may say it one way but when the coaches leave the field and we stay behind, I feel like that’s when we take ownership as players. We put the extra time in, and we make it ours.”

It's one thing, he said, for coaches to correct mistakes, “but when we’re out here on our own it’s like, ‘Man, I need you right here at this time at this point in my drop because I’m ready to throw. If I hit five steps and you’re not there, then I’m on to the next guy.’”

That's just the kind of savvy the Broncos need as they enter a season of heightened expectations.

“It just shows that no moment is ever too big for him,” Gordon said. “You hate to see if a quarterback made a mistake and you see it on his face and he's just like ugh, like he's flustered. You don't want to see that from your quarterback. So, that calmness brings calmness to the whole group.

“Like I said, Teddy's been around for a while. It's not like he's a new guy coming in. He's learned from some greats, especially Drew Brees, a Hall of Famer. So, he knows what it takes, he's seen what it takes.”

Brees recently gave him a big endorsement to his former backup in New Orleans, calling him “a great fit for Denver.”

“You’re talking about an experienced quarterback who’s got a lot of starts under his belt. Everywhere that Teddy’s been the players have loved him, he’s really endeared himself to the team, he’s got great leadership ability,” Brees said.

Now an NBC studio analyst, Brees said Bridgewater is the perfect passer to get the Broncos back to respectability.

“And yet at the same time I think that they’ve made an upgrade with Teddy going into there and competing, winning the job, winning over the team and now being in position to help them win some games.”