Broncos have their QB, now they need to beef up both lines 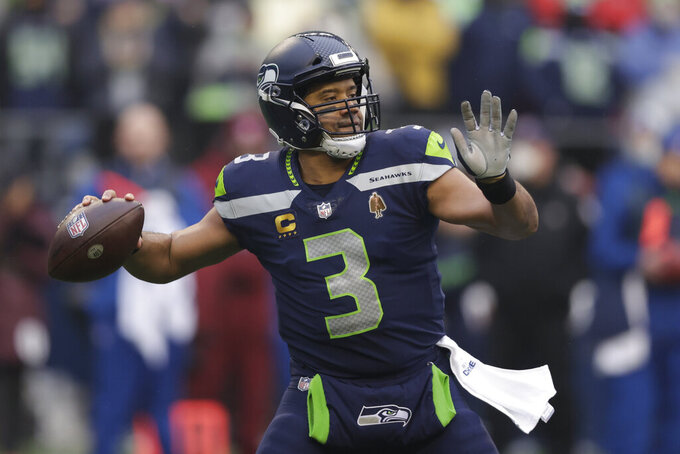 FILE -Seattle Seahawks quarterback Russell Wilson passes against the Detroit Lions during the first half of an NFL football game, Sunday, Jan. 2, 2022, in Seattle. The Seattle Seahawks have agreed to trade nine-time Pro Bowl quarterback Russell Wilson to the Denver Broncos for a massive haul of draft picks and players, two people familiar with the negotiations confirmed to The Associated Press on Tuesday, March 8, 2022. The people spoke on condition of anonymity because the blockbuster trade, which is pending Wilson passing a physical, can't become official until the start of the new league year on March 16. (AP Photo/John Froschauer, File)

NEEDS: Free agency rose in importance for the Broncos after they sent first- and second-round draft picks this year and next to the Seattle Seahawks in exchange for QB Russell Wilson along with a 2022 fifth-rounder and three players: QB2 Drew Lock, DE Shelby Harris and TE Noah Fant. Before the blockbuster trade, the Broncos had 11 picks in this year’s draft, including five of the top 100. Now they’ll have to plug some holes via free agency, and some prime positions to focus on are along the offensive line given that they finally have an elite passer in Wilson. He immediately makes them a playoff contender after six years of mediocrity under 10 other starting quarterbacks. They also need to beef up their secondary and their defensive line. OLB Von Miller hinted on social media that he pined for a return to Denver after helping the Rams to a Super Bowl title following his midseason trade to L.A., but he might be too expensive for a reunion with the Broncos.