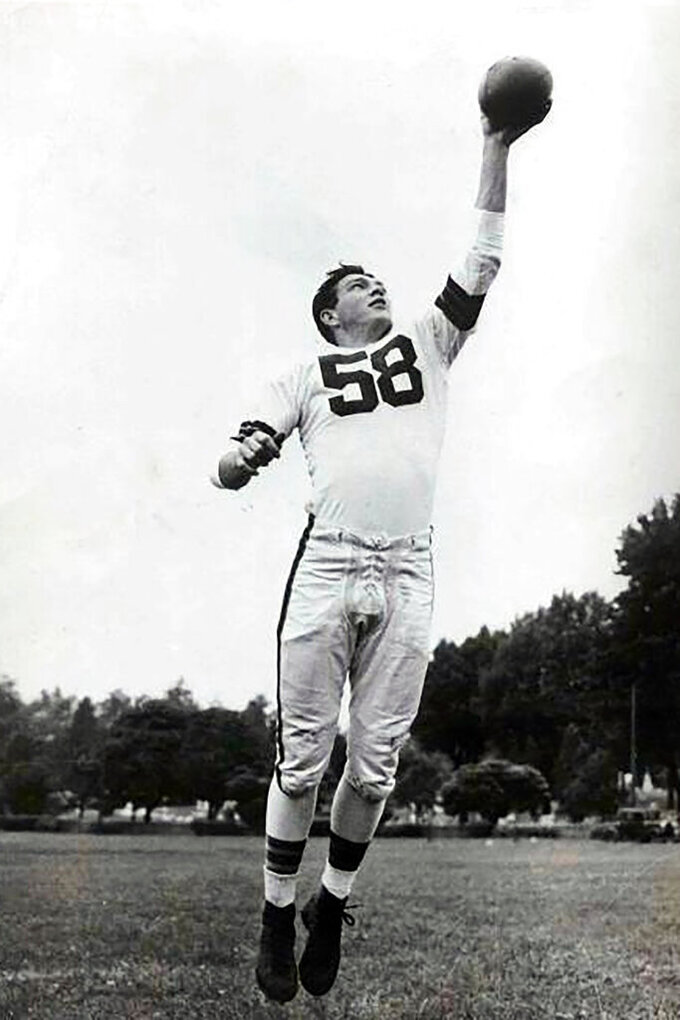 This undated photo provided by the Cleveland Browns shows football player Mac Speedie. For decades, Speedie, who died in 1993 at age 73, was overlooked for enshrinement in Canton, Ohio. But he'll soon take his place alongside teammates Otto Graham, Dante Lavelli, Marion Motley, Bill Wills and Lou Groza and their legendary coach Paul Brown — who played a role in Speedie's delayed induction. When Speedie left Cleveland after the 1952 season to play for more money in Canada, Brown vowed revenge.(Cleveland Browns via AP)

CLEVELAND (AP) — Mac Speedie spent his life overcoming hurdles both physical and figurative. He's about to clear another.

A quick, sure-handed wide receiver on powerhouse Cleveland Browns teams in the 1940s and 50s, Speedie, who overcame a childhood disease and later delayed his playing career to serve in World War II, is finally being inducted into the Pro Football Hall of Fame.

“It’s like a dream come true,” his daughter, Rebecca Speedie Walker said from her home in Colorado. “We had all but given up hope to ever see it.”

For decades, Speedie, who died in 1993 at age 73, was overlooked for enshrinement in Canton, Ohio. But he'll soon take his place alongside teammates Otto Graham, Dante Lavelli, Marion Motley, Bill Wills and Lou Groza and their legendary coach Paul Brown — who played a role in Speedie's delayed induction.

When Speedie left Cleveland after the 1952 season to play for more money in Canada, Brown vowed revenge.

“He told me when I jumped leagues that he was going to get even with me,” Speedie said in a 1991 Los Angeles Times interview. “There was a time when it bothered me, but that was years and years ago.”

Speedie's getting the last word.

A rangy, deceptively fast receiver at 6-foot-3, Speedie played with the Browns from 1946-52. He appeared in six league championship games — four straight in the All-America Football Conference and two in the NFL after Cleveland changed leagues in 1950.

He led the AAFC in receptions three times and had the most catches in the NFL in 1952, when he had 62 for 911 yards and scored five touchdowns while being named MVP on a team loaded with stars.

Speedie finished with 349 career receptions, 5,602 yards and 33 TDs with the Browns, who went 83-13-3 during his time with them. One of Graham's primary receivers, Speedie was a major reason the Browns won four consecutive AAFC titles from 1946-49 and captured the NFL title in their first year.

And yet, after he retired and his teammates of that golden era of Cleveland football were honored, Speedie was forgotten.

“He had so many supporters over the years," his daughter said. “People would ask: ‘Why isn’t Mac Speedie in the Hall of Fame? Look at the numbers.'”

Speedie's stats are only part of his remarkable journey to football immortality.

Born in Illinois and raised in Utah, he was crippled as a boy by Perthes disease, a rare bone condition that left one of his legs shorter. Doctors feared a lifelong handicap. Speedie had other plans.

After being forced to wear iron braces for years, Speedie shed them and once described his new-found freedom “like turning a frisky colt out to pasture after a year in a box stall.”

As it turns out, Speedie's given last name suited him perfectly. He was born to run.

He was a multi-sport athlete for the Utes, excelling in football, basketball and setting numerous conference track records as a hurdler — a skill he credited for enhancing his balance and timing on the field.

Speedie was drafted in 1942 by the Detroit Lions. However, there was another calling and he enlisted in the Army to serve his country.

“He was more patriotic than he was in wanting to pursue that path,” his daughter said. "He was a proud man.”

It was while playing for a service team that Speedie caught the eye of Brown, who was coaching the Great Lakes Navy team. When the AAFC was formed following the war, Speedie found himself playing for Brown's Browns.

He switched sides of the ball, going from a defensive end to offensive weapon. With Speedie on one side and Lavelli on the other, Graham — whose 10 title games in 10 seasons separate him from any QB in history — picked defenses apart.

In 1948, Speedie caught a screen pass from Graham and went 99 yards against Buffalo.

“He was almost impossible to cover one on one," Graham told the L.A. Times. "Dante probably had better hands. I tell you, without those two, I never would have made the Hall of Fame.”

If not for his disagreements with Brown, Speedie may have been inducted much sooner.

Speedie and his straight-laced coach didn't have much in common, and he didn't always agree with how Brown treated players.

One summer, Speedie brought a pet skunk to training camp. He named it Paul.

After retiring as a player, Speedie was an assistant coach with Houston before becoming Denver's head coach in 1962.

Despite a sterling resume and his case being championed by teammates, including Graham and Lavelli, Speedie didn't make the Hall in his lifetime. Last year, his family got a huge surprise with is election as a member of the Hall's centennial class.

“We woke up early and waited and my husband, Rod, who is my dad's biggest fan, reached over and he patted me on the leg and said, ‘Honey, it was just an honor for him to get this far,’” Rebecca said. "And when they said ‘Mac Speedie,’ we yelled and jumped up. The windows were shaking in the house.

"I just broke down in tears when this emotion rushed over me. He's finally where he needed to be, in his new earthly home.”