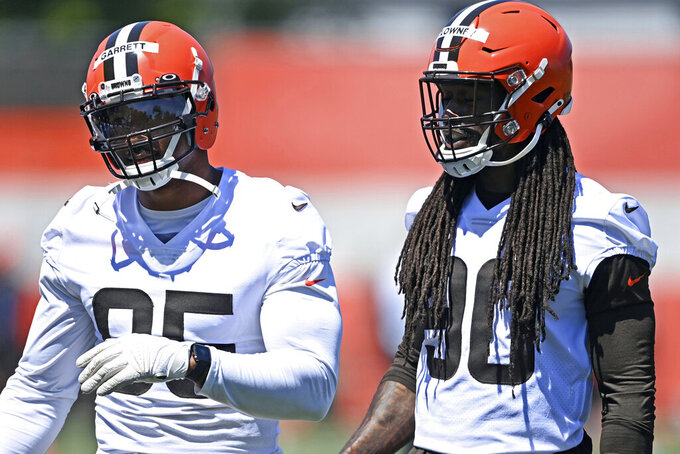 FILE - In this June 17, 2021, file photo, Cleveland Browns defensive linemen Jadeveon Clowney, right, and Myles Garrett watch during NFL football practice in Berea, Ohio. he Browns will have at least seven new starters on defense — maybe more depending on the package they're in — when the season kicks off Sunday against the Kansas City Chiefs at Arrowhead. (AP Photo/David Dermer, File)

BEREA, Ohio (AP) — Other than those familiar orange helmets, and the impossible-to-ignore Myles Garrett, the Browns might be unrecognizable to Patrick Mahomes.

When Kansas City's quarterback lines up behind center in Sunday's opener, Mahomes will be looking at a drastically different Cleveland defense from the one he faced in last season's playoffs.

The Browns' defense is new, more athletic and faster. They're banking on it being improved as well.

The first test is a scary one — the NFL's top-rated offense.

“You always want a challenge every week,” safety John Johnson III said. "They’re coming off a Super Bowl berth and it will be fun just to go out there and compete with one of the best. We want to be one of the best, so in order to do that we’ve got to beat the best.”

There will be at least seven new starters on Cleveland's defense — and as many as nine depending on the package coordinator Joe Woods calls on the first snap — when the Browns begin the season at Arrowhead Stadium against Mahomes and his posse of playmakers.

It's a rematch of the Jan. 17 AFC divisional round game between the teams, a 22-17 victory by the Chiefs, who held on behind backup QB Chad Henne after Mahomes suffered a concussion.

Soon after the loss, Browns general manager Andrew Berry and coach Kevin Stefanski turned their attention toward upgrading a defense that boasted Garrett but not much else.

Cornerback Greg Newsome II was drafted in the first round to compliment Denzel Ward, and the Browns moved up in the second round for Notre Dame linebacker Jeremiah Owusu-Koramoah, who could have a major role Sunday.

The Browns already had a talented offense. The defense, at least on paper, has the potential to impress.

“Everything,” he said when asked what has stood out in practices. “The pass rush is one of the things we’ve noticed. Adding Jadeveon, obviously Myles, A-Walk, just his responsibilities, how he’s getting guys lined up, moved around, just seem a lot more smarter, disciplined.”

Injuries in training camp cut into precious on-field time for the first-team defense, and Clowney has missed two practices this week with an illness. Woods, though, is confident he'll be back in time to join Garrett in chasing Mahomes.

“He'll be fine,” Woods said before Thursday's practice. "Hopefully we get him back here in the next couple of days.”

Woods is preparing for his 18th matchup against Chiefs coach Andy Reid, who on game day scans a plastic play-calling card like it's a menu loaded with plays for Mahomes, All-Pro tight end Travis Kelce and speedster Tyreek Hill.

“They really scheme you up,” Woods said. "They stress off your coverage and they make you cover the field vertically and horizontally. And then when you do it right, you have to make the tackle.

"Tough to defend — good scheme and good players — but we feel good where we are. We just have to execute.”

In general, but especially after facing the Chiefs, the Browns knew they needed more speed on defense. Now, they've got it.

“The game is changing,” Woods said. "It's like playing basketball on grass against some teams. They want to spread the field, get you one on one and see if you can make a tackle.

"Getting more speed and guys who have more cover skills really at all three levels of the defense is critical in today’s football.”

And essential against the Chiefs' creative passing attack.

The Browns might not disarm them, but Johnson believes they can minimize the damage.

“You have to be disciplined," he said. “They make off-schedule and off-script plays. If you keep the quarterback in the pocket, you have a good chance. If you keep guys in front of you, you have a great chance.

"If you tackle as soon as they catch the ball, you have a great chance.”

NOTES: Special teams coordinator Mike Priefer is confident in K Chase McLaughlin, who will make his debut with the Browns on Sunday. He got the job in camp when incumbent Cody Parkey injured his quadriceps, but Priefer said the well-traveled McLaughlin, who has played with six teams, “was well on his way to winning that job anyway.” ... Rookie LB Tony Fields (illness) also missed practice.