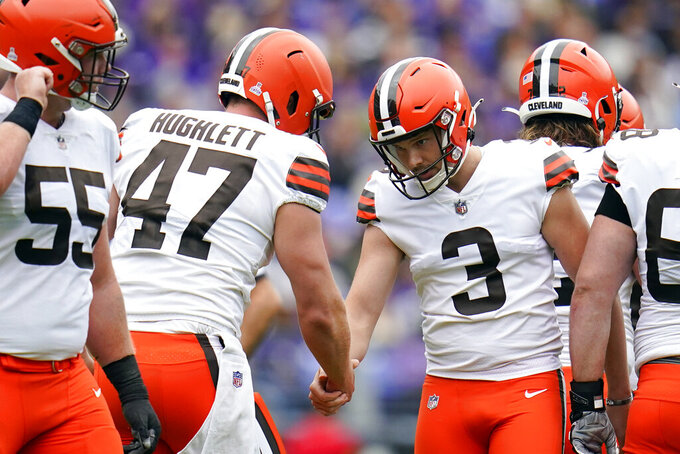 The Cleveland Browns locked up the dependable Hughlett on Friday, signing him to a four-year contract extension that could allow him to spend the rest of his career with the team.

Now in his eighth season with the Browns, Hughlett has handled snapping duties in every game — 120 straight — since the start of the 2015 season. His extension takes him through the 2026 season.

“It feels great,” Hughlett said. “My family and I have made Cleveland our home, and we’re excited to be able to stay here for another four years. All three of my kids have been born here, and this place has been a huge part of our lives."

The 32-year-old has been consistent throughout his tenure, which is why he and Cleveland's coaches were all shocked when Hughlett rolled a snap back to holder Corey Bojorquez last week on an extra-point attempt in Baltimore.

Only All-Pro guard Joel Bitonio has been with the Browns longer. Hughlett wants to finish his career in Cleveland.

“This was certainly the goal,” said Hughlett, who had stints with Dallas, New England, Jacksonville and Kansas City before signing with the Browns. ”I definitely felt like I had the talent to be able to do it. That was a tough period of my life, but obviously being here and staying here was the goal.

"The time has gone by really quick. I’m just thankful to keep it going.”

Hughlett's agent, Brett Tessler, said on Twitter that his client's “signing bonus, guarantee, and overall value” are the largest in NFL history for a long snapper.

The extension's timing is notable because Hughlett was the center of attention on a controversial call last week against the Ravens.

The Browns had a potential game-tying field goal blocked in the final minutes of a 23-20 loss. Cleveland was called for a false start while Baltimore's players claimed Hughlett move the ball before the snap, causing them to jump offside.

Special teams coordinator Mike Priefer said Hughlett didn't do anything out of his normal routine.

“Charley has a great temperament, and he’ll do whatever he can do to help them get better,” Priefer said. “That’s the most impressive thing about Charley — he’s so unselfish.”