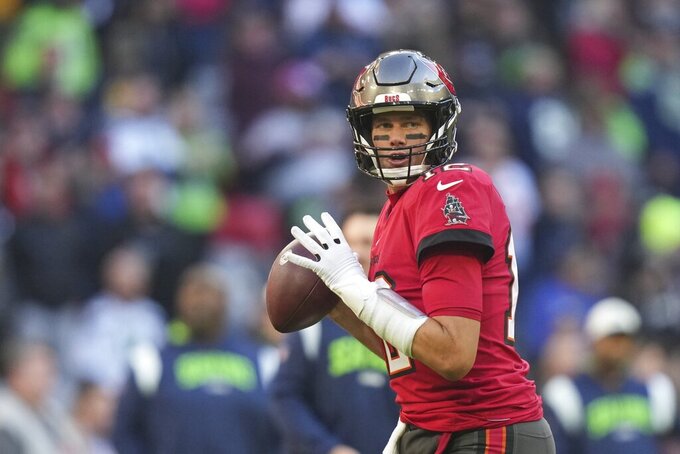 TURNOVER DIFFERENTIAL: Buccaneers plus-1; Browns minus-6.

BUCCANEERS PLAYER TO WATCH: QB Tom Brady is fourth in the NFL in passing with 2,805 yards. The seven-time Super Bowl champion has thrown for 12 touchdowns and only two interceptions. Red zone breakdowns and the absence of a consistent running game have contributed to the offense's scoring woes. Brady delivered perhaps his best overall performance of the season against Seattle before the bye.

BROWNS PLAYER TO WATCH: QB Jacoby Brissett makes his final start before Deshaun Watson returns from his 11-game NFL suspension. The 29-year-old Brissett had season highs in yards (324) and touchdowns (three) last week, but two dropped passes in the end zone contributed to the Browns losing for the sixth time in seven games.

KEY MATCHUP: Bucs NT Vita Vea vs. Browns backup center Hjalte Froholdt. Cleveland lost starter Ethan Pocic to a knee injury on the first play last week, forcing Froholdt into action. His challenge this week is the 6-foot-4, 347-pound play-wrecking Vea, who will make it tough for the Browns to run the ball.

INJURIES: Coming off a week of rest, the Bucs are as healthy as they’ve been since the start of the season. However, WR Russell Gage (hamstring) and G Luke Goedeke (foot) are out. ... Vea (foot) practiced Friday after missing two days and figures to be a game-day decision. ... RB Leonard Fournette (hip pointer) has been limited in practice and his status remains uncertain. ... RB Giovani Bernard (ankle) has been designated to return from injured reserve and could be activated. ... Several other key players — WR Julio Jones, TE Cameron Brate, S Antoine Winfield, Jr., CB Carlton Davis, CB Sean Murphy-Bunting and DT Akiem Hicks — returned to the lineup in the two weeks leading into the open date. ... Browns starting C Ethan Pocic injured his knee on the opening drive last week. He's on injured reserve, the fourth Cleveland center to suffer a serious injury this season. ... Froholdt (illness) missed two days of practice, but returned Friday and is expected to play. ... Browns starting CB Greg Newsome II (concussion) remains in the league's protocol and will miss his second straight game. ... Browns TE David Njoku (ankle, knee) was on a play count last week after missing two games.

SERIES NOTES: Cleveland won the first five meetings, and have lost four of the past five. ... The Browns won 22-17 in the most recent game played in Cleveland in 2014.

STATS AND STUFF: Brady has thrown one interception since Week 1. ... Brady is 7-1 with 2,206 yards passing and 13 TDs in eight games vs. the Browns. ... Brady is 15-5 following a bye week. Bucs WR Mike Evans is 28 yards shy of joining Jerry Rice, Calvin Johnson, Marvin Harrison, Randy Moss and Larry Fitzgerald as the only players in NFL history with 10,000 yards receiving and 75-plus TD catches in the first nine years of a career. ... Tampa Bay is ranked seventh in total defense (310 yards per game), fifth in fewest points allowed (18 per game) and tied for fourth with 32 sacks. The unit has limited opponents to 21 or fewer points in eight of 10 games. ... Evans and WR Julio Jones both have enjoyed success against the Browns in the past. Evans has 14 receptions and averaged 115.5 yards per game while scoring two TDs in two outings against Cleveland. Jones has faced the Browns twice, too, and has 12 catches for 175 yards and a pair of TDs. ... The Bucs defense has only forced one turnover in the past six games. ... Tampa Bay is 0-2 vs. the AFC North. ... The Browns need to string wins together quickly to have any chance of making the playoffs. ... Cleveland has been plagued by inconsistency in all three phases, especially on defense. The Browns allowed 171 yards rushing last week, the fifth time they've given up at least 160 this season. The Bucs and their league-worst rushing attack figure to attack Cleveland's weakness. ... Brissett didn't need to be reminded that this will likely be his final start of ‘22 with Watson eligible to play on Dec. 4. ... Brissett spent his rookie season as Brady’s teammate in New England and said the legendary QB shaped his career. ... Cleveland's potent running game struggled last week, gaining just 80 yards. ... RB Nick Chubb is second in the league with 11 rushing touchdowns and has a league-best 29 runs for over 10 yards. ... WR Amari Cooper had eight catches for 113 yards and two TDs last week. His seven scores are the most for Cleveland WR since Josh Gordon had nine in 2013. ... Myles Garrett has 8 1/2 sacks and 67 in his career. Only Hall of Famer Reggie White (87) and the Watt brothers, T.J. (72) and J,J. (70 1/2) have had more in their first 77 games. ... Rookie K Cade York had his third field-goal attempt blocked last week. ... Cleveland's field at FirstEnergy Stadium was damaged this week by a vehicle driven onto the turf someone who broke in.