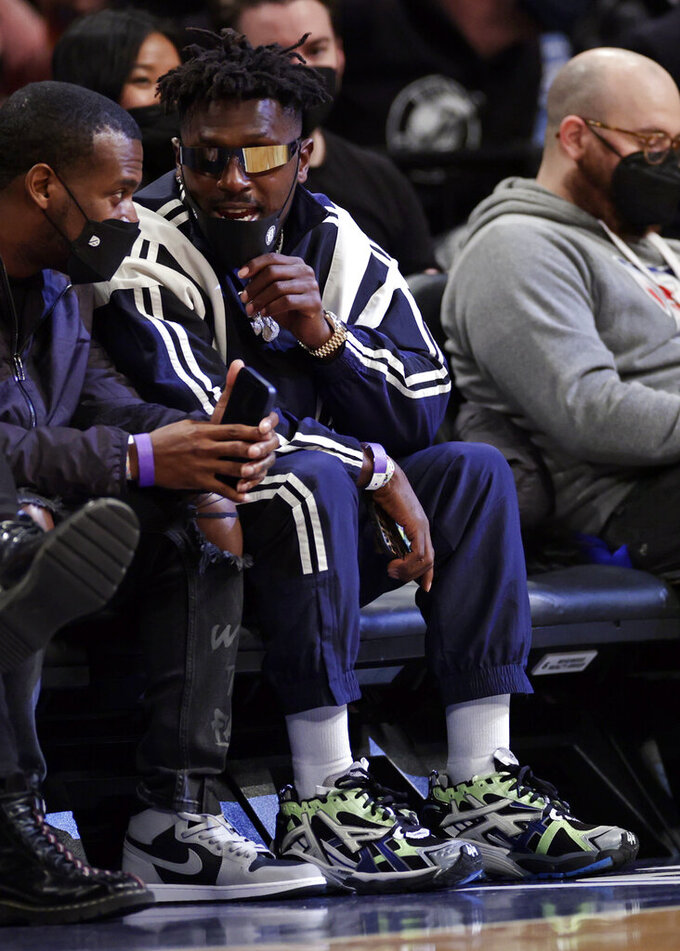 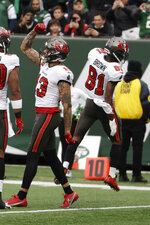 Yes, the Buccaneers are moving on from Brown, whose NFL career is on hold yet again after another in a series of incidents, including two women accusing him of sexual assault in 2019.

But Arians dispelled the notion that Brown stormed off the field Sunday — tossing some of his gear into the stands and waving to fans at the Jets' MetLife Stadium — after refusing to go back in because of an ankle injury that had sidelined him for several weeks.

Twice, Arians was asked about Brown claiming he was hurt. Both times, the coach answered “No,” that Brown didn't tell him he was injured.

“It’s pretty obvious what happened. He left the field and that was it,” Arians said, declining to elaborate on an exchange the coach said he had with the receiver on the sideline.

Pressed for details on what was said and whether Brown claimed he was too injured to play, Arians replied: “We had a conversation and he left the field.”

Asked what specifically was said that might move Brown to react the way he did, the coach added: “You have to ask him, brother. I don’t have a clue.”

“I just hope the best for him,” Arians said, while shedding little light on what led to Brown taking off his jersey, shoulder pads, undershirt and gloves before walking off during the third quarter of Sunday’s 28-24 Tampa Bay victory.

Arians added he has no regrets about giving the often-troubled receiver an opportunity to play with Tom Brady and revive a career derailed by on- and off-the-field issues — even though it ended in such a bizarre fashion. Tampa Bay was Brown's third team since his last full season in the NFL with the Pittsburgh Steelers in 2018.

The 33-year-old Brown also had messy departures from Oakland and New England — released before ever playing a game for the Raiders and then suiting up just once during a brief stay with the Brady-led Patriots in 2019.

“I wish him well. I hope if he needs help, get some,” said Arians, who was Pittsburgh’s offensive coordinator when the Steelers drafted Brown in the sixth round in 2010. “It’s very hard because I do care about him.”

Brown remained in the New York area, sitting courtside Monday night at the Brooklyn Nets' loss to the Memphis Grizzlies.

Brown hadn’t played in the NFL in more than 13 months when he signed with the Bucs in October 2020 as he neared the end of an eight-game suspension for multiple violations of the NFL’s personal conduct policy. At the time, Brown was also facing a civil lawsuit filed in September 2019 by a female personal trainer who accused him of sexually assaulting her on three occasions, including rape.

“I took a lot of time off from the game to re-evaluate myself, to look within, to get a better perspective of myself and work on myself within and without,” Brown said in November 2020.

Brady welcomed Tampa Bay’s decision to give Brown a chance and allowed the four-time All Pro to stay with him in a home the quarterback was renting from baseball Hall of Famer Derek Jeter.

Several members of Arians’ staff in Tampa Bay, including offensive coordinator Byron Leftwich, also worked with Brown early in the receiver’s career. Brown said he felt those relationships would help him make the most of the opportunity.

For a while, it worked.

Brown had 45 receptions for 483 yards and four TDs over the final eight games of last season. He also contributed during the playoffs and caught a TD pass in the Bucs’ Super Bowl win over Kansas City.

He signed another one-year deal last May and was off to a strong start when he was sidelined with the ankle injury at Philadelphia in mid-October.

Brown returned to the lineup two weeks ago after serving a three-game suspension for misrepresenting his COVID-19 vaccination status with a fake card, and had 10 catches for 101 yards in a win over Carolina.

He had three reception for 26 yards against the Jets, finishing the season with 42 catches for 545 yards and four TDs.

An impressive streak of six consecutive seasons with at least 100 catches and 1,000 yards receiving ended when Brown's erratic behavior on and off the field led Pittsburgh to trade him to Oakland in March 2019.

A tumultuous short stay with the Raiders ended with Brown demanding and being granted his release during training camp. By that time, the Raiders had voided guaranteed money in Brown’s contract after a summer with the team began with Brown, among other things, missing a number of practices because of frost-bitten feet attributed to not wearing proper footwear during a cryotherapy session.

He also tangled with the NFL and threatened to retire if forced to wear a new helmet. He later was fined by the Raiders for what the team said were unexcused absences during camp.

Brown also had an ugly departure from New England after catching four passes for 56 yards and a touchdown in his only game with the Patriots, which released him after the ex-trainer accused him of sexual assault.