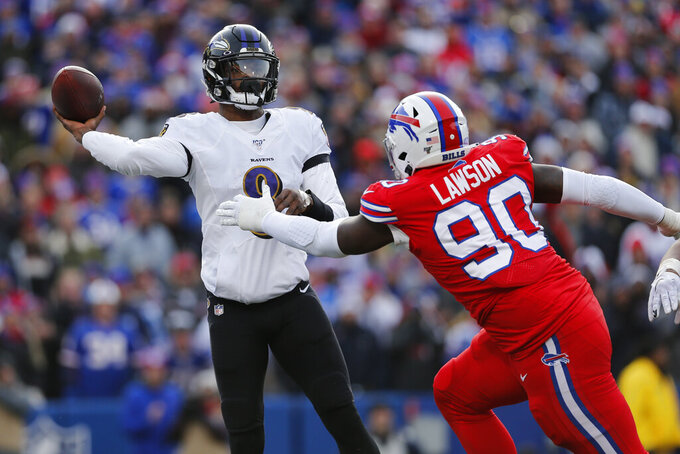 Baltimore Ravens quarterback Lamar Jackson (8) gets off a pass under pressure by Buffalo Bills defensive end Shaq Lawson (90) during the first half of an NFL football game in Orchard Park, N.Y., Sunday, Dec. 8, 2019. (AP Photo/John Munson)

ORCHARD PARK, N.Y. (AP) — Earning the Baltimore Ravens' respect is one thing. Beating them, proved to be another for the Buffalo Bills.

It wasn't long after a 24-17 loss Sunday when veteran linebacker Lorenzo Alexander was already looking forward to a rematch. Not next season or whenever the two are next scheduled to meet again. He was referring to the playoffs next month.

"Obviously we’ve got Pittsburgh next week and we’ve got to finish off this season strong to put ourselves in a position to do that," Alexander said referring to Buffalo's next game at the Steelers (8-5). "But definitely, the way we're playing with confidence, I definitely feel that we'll probably end up seeing them again."

The Bills still need to qualify for the postseason, which actually would have happened with a win over the Ravens after all the other clinching scenarios fell their way. That leaves the Bills (9-4) needing one win over a final three-week stretch rounded out by a game at AFC-leading New England, and a season finale at home against the New York Jets.

Confident as the Bills are, they made believers out of the Ravens, too.

The Bills no longer resemble the inept franchise with a revolving door of coaches, general managers and quarterbacks that muddled through a 17-year playoff drought before coach Sean McDermott and general manager Brandon Beane's arrival in 2017. Just as important, Buffalo is also showing it's better than the team that spent the first half of the season padding its record because of a soft schedule.

What stood out in the loss to the AFC-leading Ravens was how the Bills didn't look out of place in a game not decided until Josh Allen's pass to John Brown on fourth down was broken up at the goal line with 63 seconds left.

While the offense had difficulty handling the blitz-happy Ravens, Buffalo's defense drew praise for limiting the dynamic Lamar Jackson-led attack to a season-low 257 yards and forcing seven punts from a team that had punted just 24 times in its first 12 games.

It was a validating performance for a defense that still faced lingering questions about its run-stopping ability after allowing a season-worst 218 yards rushing in a 31-13 loss to Philadelphia on Oct. 27.

Now it's on the offense to respond after managing a season-low 209 yards, while Allen threw a career-high number of incompletions in finishing 17 of 39 for 146 yards with a touchdown and lost fumble.

"We're not going to let this one define us and one game make us," said Allen, the second-year quarterback who has lost consecutive starts just once, in Weeks 13 and 14 last year.

"The gap isn’t big," Alexander said of the difference between the Bills and Ravens. "We’re right there. I think the thing is to just to learn from this."

The patience and ball-awareness shown by a Bills defense that has previously struggled in dealing with offenses running misdirection plays. Except for blowing an assignment on Hayden Hurst's 61-yard catch-and-run touchdown, Buffalo didn't give up another gain of 25 yards or longer against a team that entered the game having done so 37 times.

Better hands. Not all of the incompletions were Allen's fault, as tight end Dawson Knox, running back Devin Singletary and receivers Cole Beasley and John Brown each had at least one dropped pass.

Cornerback Tre'Davious White for limiting rookie speedster Marquise Brown to 3 yards receiving on three catches, and also providing the game's most amusing moment. It happened in the third quarter when a gust of wind blew a number papers with images on them off the Ravens sideline and onto the field. White immediately picked them up and began reviewing them before an official grabbed them away.

Punter Corey Bojorquez's ongoing inconsistencies. Though he landed one punt inside the Ravens 20 and also hit a 67-yarder, Bojorquez's second punt went 35 yards, which led to the Ravens opening the scoring on Justin Tucker's 36-yard field goal. His 29-yard punt to open the fourth quarter led to Jackson capping a nine-play, 51-yard drive with a 4-yard touchdown pass to Willie Snead.

RT Ty Nsekhe continues to progress in recovering from an ankle injury after missing a third consecutive game.

Bills play at Pittsburgh in making their first appearance on Sunday night since a 56-10 loss to New England in 2007.