Burrow, winless Bengals not panicking as they face 1-1 Jets 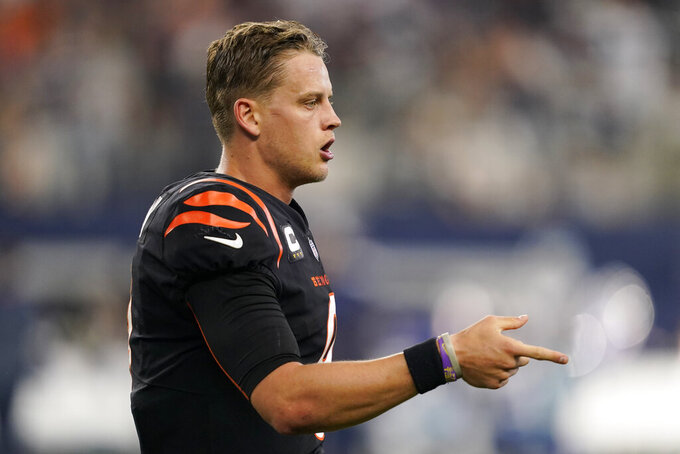 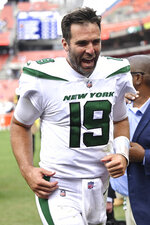 Well, at least in the Bengals' locker room.

While social media is buzzing about the Bengals' 0-2 start, Joe Burrow has blocked it all out.

“I’ve seen none of it,” Burrow said. “I’m sure it’s not a very good reaction, but I think it will be a different reaction as we get going here.”

Cincinnati is looking to avoid its first 0-3 start since 2019, when it opened 0-11 in Zac Taylor's first year as coach before beating New York in Week 13. And there's some sense of optimism: The Bengals trailed by at least two touchdowns in both of their losses this season before mounting big comeback attempts. Dallas won last week’s game 20-17 on a 50-yard field goal as time expired.

“Everyone is frustrated, but we’re not panicking,” Burrow insisted said. “Two games in, we've got 15 games left. Let’s all just take a deep breath and relax.

"We’re going to be fine. We’re not worried about it.”

Meanwhile, the Jets narrowly avoided opening 0-2 themselves with a stunning 31-30 comeback victory at Cleveland last Sunday.

Joe Flacco and New York trailed by 13 points with 1:55 remaining, but roared back with two touchdowns — sandwiched around a successful onside kick — to rally.

“We’ve won a few games here since I’ve been here that have been tough to come by and those have felt good,” said Flacco, in his third season with the Jets. “But obviously, that one ranks up there pretty high just in terms of excitement, just because of the way that we were feeling a couple minutes before that.”

And given the situation they were in, it's a feeling not many teams in similar spots have enjoyed.

The Jets became the first team to overcome a deficit of at least 13 points inside the final two minutes of regulation to win since Chicago overcame a 14-point deficit to also beat Cleveland in overtime in Week 8 of the 2001 season.

The challenge now is to keep the momentum high against a Bengals squad desperate to win.

“They’ve been on the wrong side of luck,” Jets coach Robert Saleh said of the Bengals. “This team, they’re still the AFC champs in my mind. They still look like the AFC champs, they’re still playing at a very high level and we fully expect them to be exactly what we’re seeing on tape, which is a really good football team.”

Offensive coordinator Brian Callahan thinks communication and minor errors have been a problem.

“We are still getting to know what that group is going to look like for us this year,” Callahan said. “You don’t have forever to figure it out. It does take time.”

Said Collins: “This is our first time playing together, these first two weeks. I think we will be fine.”

Jets rookie wide receiver Garrett Wilson entered the league with some fanfare after being the No. 10 overall pick out of Ohio State. He has mostly lived up to it so far.

Wilson had eight catches for 102 yards and two touchdowns, including a 15-yarder with 22 seconds left to lift New York to the victory. His 154 yards receiving in his first two games are second only to Atlanta's Drake London, who has 160.

"Watching them last year while I was in college, I knew that’s what I wanted to do," Wilson said. "That was my goal. That’s what I planned on doing. But I was just seeing how things played out, waiting my turn and waiting for the opportunity to take advantage of.”

The Bengals know they're in for a test against the Jets' defensive front.

New York has only three sacks, but it has nine quarterback hits and 24 quarterback pressures in two games.

The previous time the teams squared off — Oct. 31, 2021 — Jets backup quarterback Mike White made his first NFL start and pulled off quite a treat for New York.

White completed 37 of 45 passes for 405 yards and three TDs, and caught a 2-point conversion pass, to lead the Jets to a stunning 34-31 win with a 17-point fourth quarter.

White's jersey from the game was sent to the Pro Football Hall of Fame after his 37 completions set an NFL record for the most in a player's first NFL start.