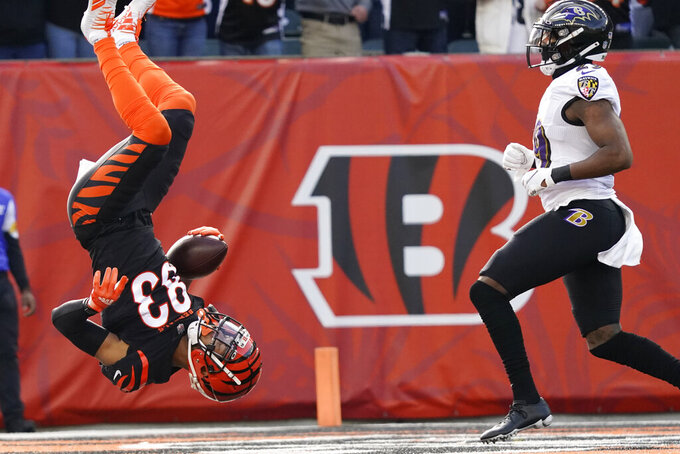 Cincinnati Bengals' Tyler Boyd (83) does a flip in front of Baltimore Ravens' Daryl Worley following a touchdown reception during the first half of an NFL football game, Sunday, Dec. 26, 2021, in Cincinnati. (AP Photo/Jeff Dean)

CINCINNATI (AP) — Joe Burrow's franchise record-breaking 525-yard passing performance clearly meant something to the Cincinnati Bengals, who continued calling deep throws for him late in the fourth quarter with a 20-point lead against division rival Baltimore until the mark was secured.

Only three QBs in NFL history have thrown for more yards in a game. But Burrow was more interested in what the final score — 41-21 over the Ravens — meant for his team, which took over first place in the AFC North with two games left.

“We’re right where we want to be,” Burrow said. “We knew we had a chance to be in this position in training camp. We knew the kind of team we had. You couldn’t ask for a better situation right now. We control our destiny. Win these next two games, and we’ve got the division locked.”

Burrow, who snapped Boomer Esiason's team record of 522 yards, was 37 of 46 with two touchdown passes to Tee Higgins and one each to Tyler Boyd and Joe Mixon as the Bengals swept the Ravens for the first time since 2015. Cincinnati won 41-17 at Baltimore on Oct. 24.

Burrow's 500-yard passing day was the 24th in the NFL and the first this season, and he became the 20th QB to reach the half-century mark. Only Norm Van Brocklin (554 yards), Warren Moon (527) and Matt Schaub (527) have thrown for more. Burrow couldn't remember if he had thrown for that many yards at any level.

“Maybe. Not sure. Probably. I threw for a ton of yards in high school, so who knows,” said Burrow, speaking after the game while wearing a Santa hat and a red T-shirt advertising the fictional Krusty Krab restaurant from his favorite TV show, “SpongeBob SquarePants.”

“I probably did. I really don’t think about the yards too much,” he said. “I’m just as happy about throwing for (148) yards against the Raiders and going out and winning the game. So whatever it takes to win the game. Today it took throwing for 525 yards and being smart with the football.”

The Bengals are having their best season since 2015, when they last reached the playoffs and were eliminated by the Pittsburgh Steelers in a wild-card game.

Higgins had 12 receptions for a career-high 194 yards. Ja'Marr Chase caught seven for 125 yards, and Boyd had three catches for 85 yards.

“He’s making really good decisions, and then the ball was coming out quick when when we needed to," Bengals coach Zac Taylor said of Burrow. "He was seeing some of the stuff down the field really well. You could tell his confidence he had the pocket to get away from some pressures that showed up. You know, you can just tell when a guy’s got it and today he had it for sure.”

With Lamar Jackson out with an ankle injury and backup Tyler Huntley on the COVID-19 list, Josh Johnson — signed as a free agent 10 days ago — started at quarterback for the Ravens (8-7). His 4-yard pass to Rashod Bateman put Baltimore up 10-7 in the first quarter, but the Ravens — especially their injury-ravaged secondary — couldn't keep up with Burrow and the Bengals.

Johnson was 28 for 40 for 304 yards with two touchdown passes and an interception. Tight end Mark Andrews had eight catches for 125 yards and a TD. The Ravens were ineffective running the ball, with Devonta Freeman leading the team with 17 yards.

Baltimore is now on the bubble to make the AFC playoffs and will hope to get some key players back from injuries and the COVID-19 list for its final two games, both at home, against the Los Angeles Rams and the Steelers.

“We’re going to focus on the last two and see what we get accomplished and see if we can work our way into the playoffs,” coach John Harbaugh said.

Late in the game with the outcome decided, Burrow kept throwing the ball in a bid for the record, which he shattered on a 52-yard bomb to Mixon after the 2-minute warning. Mixon finished with 135 yards from scrimmage — six catches for 70 yards and 18 carries for 65 yards and a 1-yard, first-quarter touchdown on fourth-and-goal.

The Bengals never punted, and when Cincinnati took over on downs with 8:07 left, Burrow dropped back to throw six straight times and was sacked twice on a drive that ended on a missed field goal. An interception gave Burrow one more chance at the record, and it was his after two more big pass plays.

Johnson became the first player to throw a touchdown pass for multiple NFL teams in the same season since 2015, when Brandon Weeden and Ryan Mallett did it, according to ESPN. Johnson played three games for the Jets and threw three TDs earlier this year. This was Johnson's first start since 2018 and the ninth of his career. He played for San Diego Fleet in the Alliance of American Football in 2019 and for the XFL’s Los Angeles Wildcats last year.

Ravens: CB Anthony Averett suffered a chest injury making a first-quarter tackle and did not return.