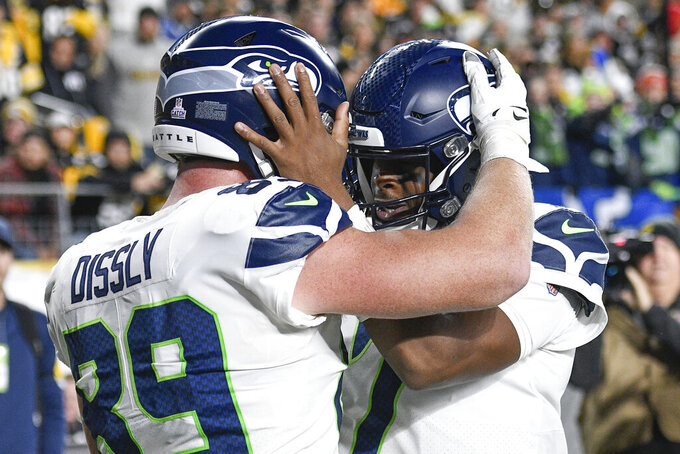 Seattle Seahawks tight end Will Dissly (89) celebrates with quarterback Geno Smith (7) after scoring a touchdown against the Pittsburgh Steelers during the second half an NFL football game, Sunday, Oct. 17, 2021, in Pittsburgh. (AP Photo/Don Wright)

OPENING LINE: Saints by 5 1-2, according to FanDuel SportsBook

TURNOVER DIFFERENTIAL: Saints plus-5; Seahawks plus-2.

SAINTS PLAYER TO WATCH: WR Deonte Harris. Harris had a breakout game as a rookie back in 2019 when he returned a punt for a touchdown in the Saints' victory in Seattle. He’s grown to become a bigger part of the passing game in addition to being their top returner. Harris has two TD receptions this season of longer than 50 yards, but he did get injured (hamstring) two weeks ago against Washington.

SEAHAWKS PLAYER TO WATCH: RB Rashaad Penny. Penny is expected to be activated from injured reserve after missing time due to a calf injury and his return is vital. Chris Carson is on injured reserve with a neck issue. Alex Collins is beat up after becoming Seattle’s first 100-yard rusher in two seasons last week. The Seahawks seem set to return to a run-based offense with Geno Smith at quarterback and need as many capable running backs as possible.

KEY MATCHUP: Seattle run game vs. New Orleans run defense. The Saints have the second-best run defense in the NFL giving up 79 yards per game on the ground. Seattle believes with Russell Wilson sidelined the best method on offense is to have a solid run game that emerged in the second half last week. The question for Seattle is who will be the primary ball carrier with Collins dealing with injury and Penny coming off injured reserve.

KEY INJURIES: The Saints designated linebacker Kwon Alexander, defensive end Marcus Davenport, wide receiver Tre’Quan Smith and kicker Wil Lutz to return from injured reserve to practice this week. ... Seattle’s biggest injury unknown is likely DE/LB Darrell Taylor after he was taken off the field on a backboard against Pittsburgh. Coach Pete Carroll said all of Taylor’s scans and tests came back clear for a neck injury and he may have more of a shoulder issue, and could possibly play against the Saints. Taylor has been one of Seattle’s most effective pass rushers.

SERIES NOTES: This will be the 17th all-time meeting with four of the previous five coming in Seattle, including a pair of playoff matchups. ... The Saints won the last meeting in 2019, building a 27-7 lead behind a solid performance from Teddy Bridgewater. Seattle scored on the final play of the game, but the Saints dominated.

STATS AND STUFF: Saints QB Jameis Winston has thrown four TDs and zero interceptions in two previous games on Monday night. ... RB Alvin Kamara had 161 yards rushing and receiving and two touchdowns in the 2019 victory over Seahawks. ... CB Marshon Lattimore had six passes defensed in Week 5, the most by any defensive back since Kyle Fuller had six in 2017. ... Seattle is 0-2 at home this season and has lost three straight home games dating back to last season’s NFC wild-card loss to the Rams. The last time Seattle dropped four consecutive home games was 2008 when the Seahawks lost five straight at home. ... LB Bobby Wagner is tied for league led with 72 tackles and had 14 in Week 6.

FANTASY TIP: Probably best to avoid any of Seattle’s running backs. There’s uncertainty about Collins’ health and how good Penny will be coming off injured reserve. There’s also the Saints' defense that is second in the league at stopping the run.