Cardinals banking on Kyler Murray to start a new era 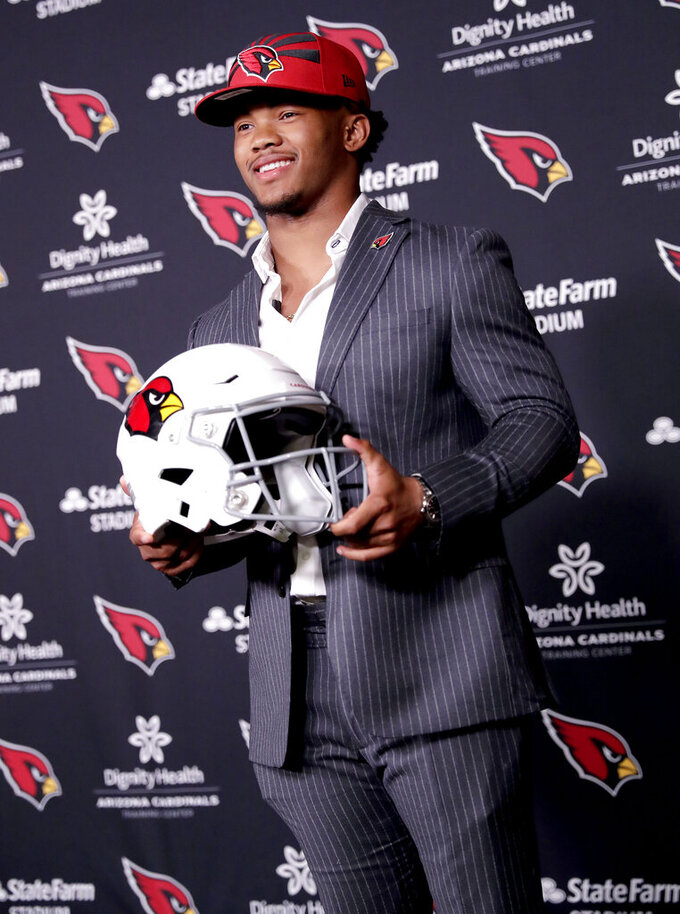 Kingsbury recruited Murray when he was the offensive coordinator at Texas A&M and remained in touch with the talented quarterback as the coach at Texas Tech, even though he played for a rival school.

Now the pair have been reunited, the Heisman Trophy winner and the first-year Arizona Cardinals head coach ushering in a new era in the desert.

"As a player, you want to have a guy who knows what you do, respects your game and is behind you at all cost," Murray said Friday during his introductory news conference. "He was always that guy for me."

The Cardinals took an unusual step to land an unusual player, using the No. 1 pick in the NFL draft to take Murray a year after moving up to take Josh Rosen at No. 10.

Arizona's brass says it still likes Rosen, despite trading him to Miami for the 62nd pick this year and a fifth-rounder in 2020. The Cardinals selected Massachusetts receiver Andy Isabella with the No. 62 pick.

It's just that they liked Murray even more, seeing him as a transformative player for a franchise needing to make an about-face.

Murray is a dynamic athlete who became the first person to be selected in the first round of the MLB and NFL drafts. He accounted for more than 5,300 yards and 54 touchdowns at Oklahoma, following the footsteps of Baker Mayfield onto the Heisman Trophy stage and as the first name called at the NFL draft.

"He's a dynamic talent, a unique talent I don't think anybody's seen when you talk about that combination of runner and passer," Kingsbury said.

The two-sport star appeared to be headed down the baseball route after a superb sophomore season led the Oakland Athletics to draft him with the ninth overall pick of the 2018 MLB draft. An outfielder, Murray agreed to a minor league contract with a $4.66 million signing bonus. The A's even had a locker with Murray's jersey hanging in it at their spring training facility in Phoenix.

Murray did end up in Arizona, but with the Cardinals after deciding in February he would pursue an NFL career.

"It's been a long time, having a decent baseball season, getting drafted and in the back of my head wanting to ball out that season, then be here in this position," Murray said. "I feel like everything was planned, everything was thought out and now that's it here, it's kind of crazy. At the same time, this is where I wanted to be."

The knock on Murray has always been his size. At 5-foot-10, he is not the prototypical quarterback.

He also can do things few quarterbacks of any size can do.

Murray is perfectly comfortable in the pocket and has superb awareness, able to slide away from pressure to avoid sacks. He's shifty, too, so tacklers rarely get a clean shot and he has an ability to change arm angles to wing passes around big on-rushing arms.

Flush him from the pocket and Murray becomes even more dangerous. Fast and agile, he moves more like a running back than a quarterback, a player who can make tacklers miss and reel off huge gains.

Murray has obviously yet to play a down in the NFL, but has been compared to Russell Wilson, Seattle's 5-10 quarterback.

"There is no doubt Russell sort of broke the mold and now you see the things Kyler did on a big stage against big-time teams," Kingsbury said. "His foot speed, his athleticism, his ability to create in space is second to none."

He also had a good teacher.

Murray's father, Kevin, was drafted by the Milwaukee Brewers before going to Texas A&M, where he was a two-time, second-team All-American. Kevin Murray now runs a quarterback training service and has worked with Kyler since a young age.

"His dad is one of the top quarterback mentors in the country," Kingsbury said. "He was raised to be super competitive. He's been around it, he knows what it looks like. He's had success at every level. He doesn't know anything but winning."

The Cardinals are hoping Murray can keep the trend going.