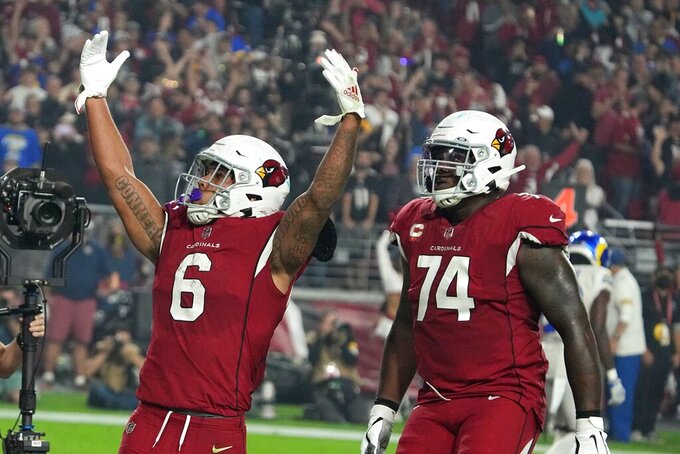 Arizona Cardinals running back James Conner (6) celebrates his touchdown against the Los Angeles Rams with offensive tackle D.J. Humphries (74) during the first half of an NFL football game Monday, Dec. 13, 2021, in Glendale, Ariz. (AP Photo/Rick Scuteri)

GLENDALE, Ariz. (AP) — The Arizona Cardinals will be without Pro Bowl running back James Conner and rookie receiver Rondale Moore as they try to clinch a playoff spot on Saturday by beating the Indianapolis Colts.

Conner, who has been batting a heel injury, has had a big season in his first year with the Cardinals, particularly when it comes to finding the end zone. The fifth-year pro has run for 700 yards and 14 touchdowns to earn his second career selection to the Pro Bowl.

Moore (ankle) has been one of the team's top receivers with 54 catches. The Cardinals are already without three-time All-Pro receiver DeAndre Hopkins, who is expected to miss the rest of the regular season with a knee injury.

The Colts will be without one of their best defensive players. 2020 All-Pro linebacker Darius Leonard was one of three players — along with receiver Zach Pascal and safety Khari Willis — put on the reserve/COVID-19 list earlier Saturday. Indianapolis has seven total players on the COVID-19 list.

The Cardinals have two players on the COVID-19 list: three-time Pro Bowl center Rodney Hudson, along with punter Andy Lee.

The Cardinals (10-4) are trying to clinch a playoff spot for the first time since 2015. The Colts (8-6) have won five of their past six games and are currently in the No. 5 spot of the AFC playoff race.