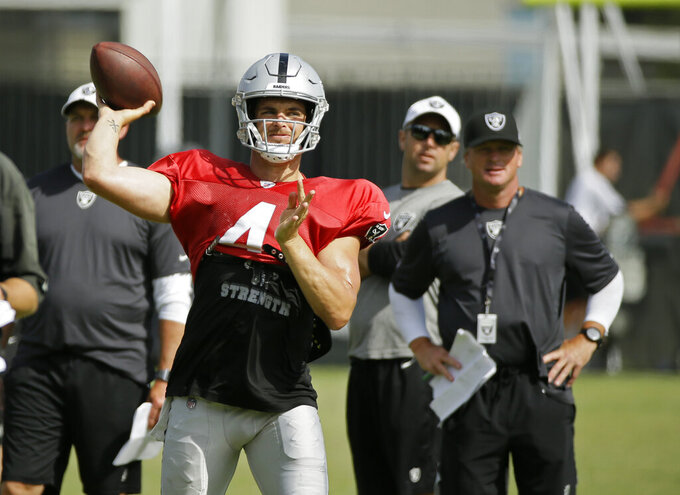 NAPA, Calif. (AP) — Whether it was because of the poor pass protection, a lack of big-play receiving threats downfield or a fear of making mistakes, almost no quarterback was as cautious as Oakland's Derek Carr last year when it came to going for the big play.

Al Davis' old franchise, which was built on quarterbacks like "The Mad Bomber" Daryle Lamonica, who thrived on chucking it deep to speedy receivers, relied heavily last season on checkdowns to running backs and throws short of the sticks.

If that is ever going to change, this is the year for it. Carr now has two proven deep threats at receiver in Antonio Brown and Tyrell Williams and an upgraded line thanks to the addition of tackle Trent Brown.

"These guys will make some of the worst throws look really good," Carr said. "If you underthrow the ball a little bit, AB and Tyrell, they're good at adjusting and making it perfect because they understand where the defender is, the coverage, that kind of stuff. Absolutely it helps. In my mind, I can take more chances."

Carr took few chances last year when the receivers who got the most playing time were the mostly underwhelming Jordy Nelson and Seth Roberts, who failed to instill fear of the deep ball in opposing defenses.

With rookie tackles Kolton Miller and Brandon Parker having allowed 26 sacks last year, according to Pro Football Focus, Carr's usual strategy was to get rid of the ball as quickly as possible. His average throw traveled 6.8 yards downfield, according to SportRadar, second lowest among quarterbacks with at least 200 attempts, and the lowest mark of his five-year career by 1 yard per pass.

"There's never been any restrictions with Derek," coach Jon Gruden said. "I thought Derek was unbelievable last year in some really tough situations."

While the supporting cast in Oakland last year clearly impacted Carr's performance, he has always been one of the more cautious quarterbacks since entering the league in 2014. He's ranked in the bottom half in the league in average depth of target each season and ranks 35th out of 44 QBs with at least 500 attempts the past five seasons.

But Carr has the ability to throw deep, ranking as the most accurate passer in the league last year on his deep throws, according to Pro Football Focus. That has been apparent early in training camp with Carr hitting Williams on one of his first tries.

"We learn a lot of stuff about everybody out here on the practice field every year," Carr said. "You learn what you can get away with. You learn what you can't with certain guys. So is Coach. Coach is in my ear, 'Hey, get (Williams) that ball. Get him that ball. Throw that thing up to him. Give him that chance.' We're going to put it on his shoulders to go make those plays. That's what he wants. Any receiver will tell you they want that, but they have to prove that out there. He's proven it for Coach Gruden to say, 'Hey, you have free will to a certain extent depending on who he's talking to.' We get Tyrell, we get AB out there, man let's get them the ball."

The timing hasn't come by accident. Brown went to Carr's house soon after he arrived in the Bay Area following a trade from Pittsburgh in March and they have spent much of the offseason working together at local parks when they weren't allowed at the team facility.

About 10 receivers went to visit Carr at his brother's house in broiling Bakersfield earlier this month for a two-day workout before the start of training camp.

"It shows you that they just love football," Carr said. "Even when we were doing that little minicamp in Bakersfield, it was 180 degrees and they're like, 'Man, I just can't wait to play football again.' They don't care that it's hot. They don't care that they're tired, that I just made them run 200 plays. They're (like), 'Man, I can't wait to put the pads on.' You get those kind of people that just love it that much and aren't worried about the other little stuff, it's pretty cool."