Carroll savors another playoff trip after decade in Seattle 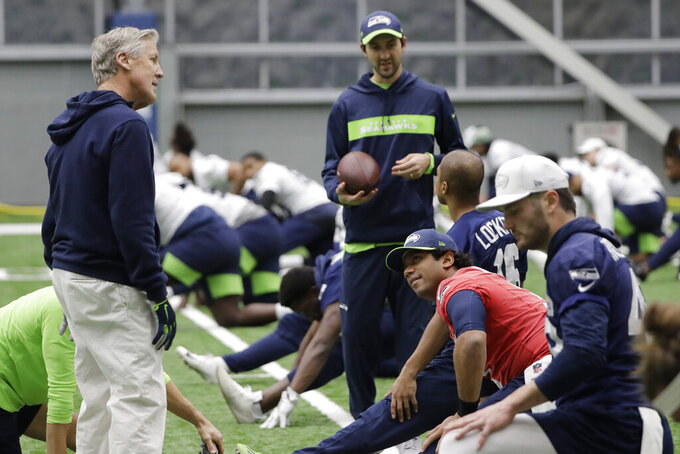 RENTON, Wash. (AP) — When Pete Carroll was informed that nearly 10 years to the day had past since he was announced as the Seattle Seahawks head coach, the normally effusive coach was momentarily stunned.

“It seems like it just flashed by, really,” Carroll said.

It’s been nearly 10 years exactly — Jan. 11, 2010 is when he was officially hired — since Carroll left behind his reign over Southern California and embarked on a return to the NFL. His decision to come to Seattle was essentially a science experiment to see if the lessons learned and program created in Carroll’s time in college could be transferred with success to the professional game.

What seemed destined to be either a raving success or complete disaster has turned out to be the former. When the Seahawks face Philadelphia on Sunday in the opening round of the playoffs, it will mark Seattle’s eighth postseason appearance in Carroll’s 10 seasons.

Seattle had just 10 playoff appearances in its history before Carroll’s arrival. He’s the winningest coach in team history, picking up his 100th regular season victory with the Seahawks in Week 15 against Carolina. He’s brought the franchise to two NFC championships and its first Super Bowl title.

“I thought you guys would have me for a couple years and then kick me out of here,” Carroll said. “I never dreamed that we would be here 10 years because I’ve never been anywhere 10 years. This was a first. It really has been a flash. The amazing thing to me is that we’ve been through a generation of players. Guys have come through the program, played their whole careers and they’re on to the rest of their life. That’s an amazing thing to see happen. It’s been an amazing 10 years. It’s been a blast.”

While he may be the oldest coach in the league at age 68, Carroll still has the same youthful enthusiasm that he brought from college a decade ago. Some of his coaching decisions can be rightfully debated during that time, none more than the goal-line pass in Super Bowl 49 that was intercepted and cost Seattle a second straight title.

But Carroll’s commitment to the job and doing it his way has remained consistent.

“He’s the same. He’s consistent. I’ve never seen him not happy or not enjoying ball,” said linebacker K.J. Wright, the longest tenured Seattle player having been drafted in 2011. “We could be winning. We could be losing. He’s pretty consistent.”

Carroll’s excitement and longevity for the job was put into perspective last month when just a few miles away, Washington coach Chris Petersen suddenly resigned. While he said it wasn’t burn out, it was clear Petersen wanted to do something more than just be a college football coach.

That’s never seemed to be the case with Carroll. Throughout his decade in Seattle, Carroll’s been able to mix off-field interests while staying grounded in his responsibility in being a coach.

“He's always been full of energy. Every day he’s always playing games and doing things,” said his son Nate Carroll, Seattle’s wide receivers coach. “I've not seen him really waver other than probably the year after we lost the Super Bowl when it became more challenging. Guys started to challenge a little bit more in terms of his coaching style. That was his most challenging year.”

But much like his time in college when recruits would leave after three or four years, Carroll cycled through many of the old stalwarts that created the foundation for the teams early in his Seattle tenure and were posing those challenges back in 2015. Richard Sherman, Earl Thomas, Michael Bennett, Cliff Avril and Kam Chancellor were all key pieces of Seattle’s defense that moved on to other places or stepped away due to injury. Same with Doug Baldwin and Marshawn Lynch, although Lynch is now back for a brief second tenure.

Cycling out the old and bringing in the new refreshed Carroll. He got to teach his system and football beliefs to a new generation. Whether he’ll be up for teaching the next generation of Seahawks is unknown. Carroll will turn 69 next September. His current contract with Seattle goes through the end of the 2021 season when he’ll turn 70.

Even if he decides at that time to step away, Carroll proved his style can work in the pro game.

“I wanted to see what it would be like if you treated people like they were your very own family. You care for them that much and you look after them and you try to help them find their best in every way that you can. Not just coach football and all that, and see what the result would be on this level,” Carroll said. “Most people would say you couldn’t. When I came here, there were a lot of people who thought, you’re a college guy. You can’t do that. Or, you can’t do whatever you’ve been doing.

“We didn’t do anything different,” he continued “We just learned more how to care for people in more effective ways and understand really what I was doing before I didn’t even know. I’ve learned so much since I’ve come here in understanding why I’m doing what I’m doing and how it fits and where there’s value in it and strengths to it. There’s a method to it and all of that. It’s been really rewarding. It’s been a tremendous experience.”