Carr's knack for game-winning drives has Raiders in hunt 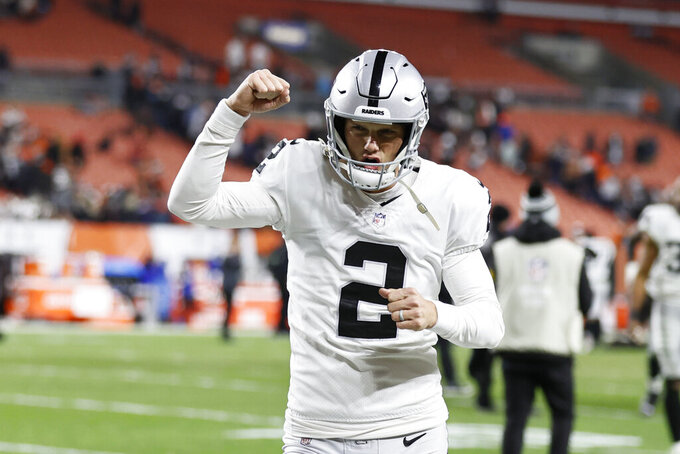 HENDERSON, Nev. (AP) — Derek Carr practiced game-winning drives over and over when he was growing up.

“For like three hours, you would just hear me count down, ‘3, 2, 1,’ and I’d shoot it, or throw the last pass, or catch the last pass,” the Las Vegas quarterback said after leading the Raiders into game-winning field-goal position Sunday in Indianapolis. “I always just loved that moment.

“Maybe I should have practiced some more stuff.”

Perhaps, considering the Raiders are 56-70 with Carr as their starter.

But Carr, an eight-year veteran, does rank second since entering the league in 2014 with 29 game-winning drives. That's second only to Los Angeles Rams quarterback Matthew Stafford (30).

This year, the Raiders have needed all the wins they could get. And they need another Sunday night against the Los Angeles Chargers, likely an all-or-nothing showdown between AFC West rivals.

Sunday’s 23-20 victory over the Colts kept the Raiders’ playoff hopes alive and marked Las Vegas’ fifth last-second victory this season. According to Sportradar, the Raiders are the first team in NFL history to win five games in a season with a score on the final play.

“Whenever we get in those moments, and seeing the confidence on my teammates’ faces, knowing that we can do this, it’s a cool thing for me,” Carr said. “I don’t know why I’m wired that way. I’ve always liked it since I was a little kid.”

Raiders placekicker Daniel Carlson has delivered the game-winning kick four times this season, overtime field goals to beat Miami in Week 3 and Dallas on Thanksgiving, along with kicks at the end of regulation against Cleveland in Week 15 and Indianapolis last week.

And before a slew of off-field distractions hampered the team, the Raiders opened the regular season with a walk-off overtime TD pass from Carr to Zay Jones against Baltimore.

“Derek is the one that makes everything go,” Raiders offensive coordinator Greg Olson said. “We tell our guys you’ve got to be able to keep up with the quarterback, and that’s the standard that’s set here in terms of the mental part of the game and understanding the plays and the variety of the plays that are going to get called in those situations.”

Olson said the game seems to slow down for Carr in those situations, but it’s an added credit to everyone around him who has been told they must react off their quarterback in timely fashion.

“It starts with Derek, but again everyone’s involved in it and we’re fortunate that we’ve got extremely intelligent group of players across the board,” Olson added

A much-improved defense under first-year coordinator Gus Bradley also must be credited for helping to put the Raiders in winning positions at times.

For instance, in the game against the Ravens, it was Carl Nassib’s strip sack of Baltimore quarterback Lamar Jackson and Darius Philon’s fumble recovery that gave the ball back to the offense in Baltimore territory three plays before Jones’ winning TD.

Against Miami, after Carr found Bryan Edwards on a deep route, it was backup running back Peyton Barber rushing for 40 yards on four carries before Carlson’s winner.

In Dallas, after its defense stopped the Cowboys on their first possession, Las Vegas used an eight-play drive and took advantage of 38 penalty yards — including two penalties that moved the ball to the 11-yard line — for Carlson’s winning kick.

Making up for the interception he threw on the previous possession, Carr took advantage of his defense’s turning in a three-and-out and was 4 for 6 on the game’s final drive in Cleveland, moving the Raiders downfield efficiently 51 yards to the Browns’ 30 before turning things over to Carlson.

Sunday, it was Carr engineering his 29th game-winning drive, as he connected with four targets before running back Josh Jacobs powered the Raiders to Indianapolis’ 15-yard line for Carlson’s career-best 35th field goal.

“When we’ve had a lot of two-minute situations, when it happens, we don’t feel any extra pressure,” offensive lineman Kolton Miller said. “We’re confident in our ability and you can feel that from DC totally. He’s really one of the best in the league when it comes to that and that reassures us and we’re always up for the challenge.”