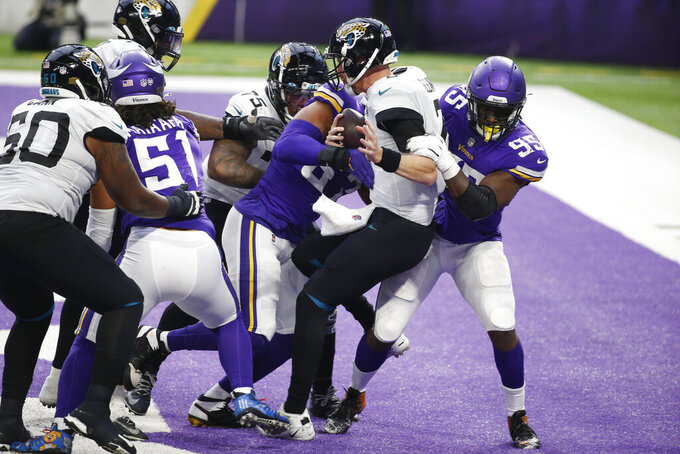 The Jacksonville Jaguars are holding all sorts of auditions during Christmas week.

Coach Doug Marrone said Wednesday that Gardner Minshew and Mike Glennon will vie for the starting job in practice before hosting Chicago (7-7). That's right, an open competition in Week 16 of the regular season.

“We’ve all gone through a lot of situations,” Minshew said. “I don’t think anything quite like this."

Riddick, who gained front office experience as director of pro personnel for the Philadelphia Eagles (2010-13) and was a scout with the Eagles and Washington before that, already interviewed for GM openings in Houston and Detroit. Smith, who spent a dozen seasons as Texans GM, already met with Atlanta and is expected to also interview with Detroit.

Jacksonville (1-13), which has lost a franchise-record-tying 13 consecutive games, has arguably the most attractive GM opening in the league. The Jaguars currently have a grasp on the No. 1 pick in 2021 NFL draft — likely Clemson star quarterback Trevor Lawrence — to go with 10 more picks and close to $100 million in salary cap space.

What they don't have is — and haven't had in decades — is a franchise quarterback.

Marrone turned to rookie Jake Luton at the bye week, partly because of Minshew’s struggles to get the ball down the field and partly because of a sprained thumb on his throwing hand. Luton made three starts, but ended up getting benched after a four-turnover performance against Pittsburgh. Glennon replaced him and started three games, a run that ended following his fourth turnover in six quarters.

Minshew regained the starting spot last week at Baltimore, but was sacked five times and missed several open receivers deep. He also took a safety, lost a fumble and had an interception that was returned for a touchdown negated by a roughing-the-passer penalty.

Marrone responded by opening up the job like it's the preseason.

“We're going to split the reps and see how practice goes,” Marrone said. "We've got a competition going on and we'll see who does well.”

Minshew and Glennon almost laughed off the situation, especially because it started during a walkthrough Wednesday.

“It was a good day, really highly contested,” Minshew quipped.

Added Glennon: “I've never been part of any competition in practice the week of a game, so it's definitely unique. ... It's a unique situation; it's been a unique year. A lot's come up this year that I don't think any of us saw coming."

Marrone also talked to his team about all the speculation regarding tanking the final two games and making sure the franchise secures the top pick in the draft.

“When you're not winning football games, there's going to be a lot of talk out there and you have to understand that," Marrone said. "It's what we brought upon ourselves. ...

"I understand it. I don't really have a feeling either way. I'm not (ticked) off. I'm not overly excited about it. I'm focused on this team, these coaches and trying to win this game.”