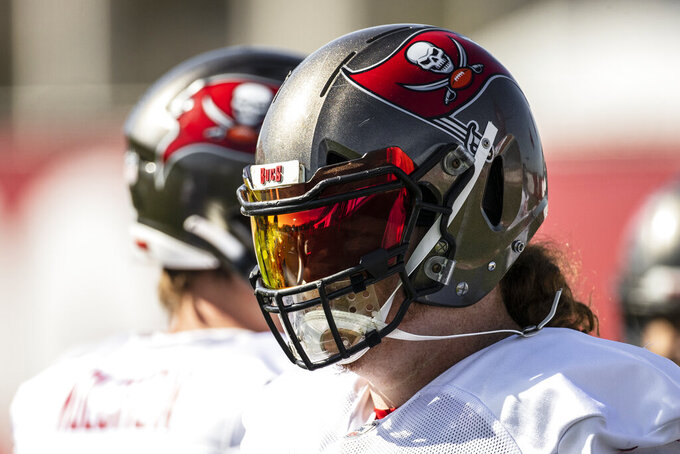 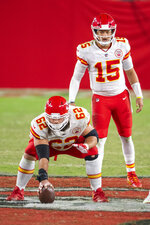 You know, the kind of stuff new teammates shoot the breeze about: the city, living arrangements, family.

But after about three minutes, the Buccaneers' new quarterback switched the conversation with his new center to business. And it took an unexpectedly odd turn.

Jensen was being told — more like ordered — by the six-time Super Bowl champion to make sure he gets in the habit of taking a towel, coating it with baby powder and rubbing it on his backside so it's never sweaty when he reaches for the football.

“That’s keeping his hands dry and keeping the ball dry,” Jensen explained while somehow keeping a straight face. “At that point, he’s done this for such a long time and had so much success, I mean, you’ve kind of got to listen to him.

"You going to backtalk him? I just don’t think that’s how that works.”

Yes, the relationship between centers and quarterbacks is, uh, special, and it helps everything work on offense.

“It didn’t take too long, really,” Jensen said of building a rapport with Brady. “We both kind of have a fiery spirit and, you know, I think that has helped us quite a bit, getting to know each other and knowing what we’re about.”

Towels and powder, however, weren’t the only things Jensen had to get used to.

“I used to wear a glove on my right hand and I used to cut the tips of the fingers off, but he brought it up,” recalled Jensen, who's in his eighth NFL season and third with the Buccaneers.

“Hey, do you always wear a glove?” Brady asked.

Brady's recent centers in New England didn't. And just like that, Jensen’s glove was gone.

“I mean, when Tom Brady tells you to do something, you usually do it,” a smiling Jensen said. “It was a little bit of an adjustment at first, especially not wearing a glove. I used to always wear a glove and you start getting your hands pretty torn up not wearing a glove as an offensive lineman."

“I call him REE-ter, just because when he first got here, I called him REE-ter and he never corrected me,” Mahomes said. “So I’m like the only person left that still calls him REE-ter instead of RYE-ter. But don’t tell him that. He’s a great guy.”

Reiter, who was claimed off waivers by Kansas City in 2018 after he spent his first three NFL seasons with Washington and Cleveland, just let Mahomes mangle his last name for a while.

“I think at that time, I just stopped trying to correct people and I just kind of dealt with it,” Reiter said with a laugh. “It’s kind of gone on my whole life. So, you know, the player he is, he can call me whatever he wants.”

Truth is, Reiter has become arguably Mahomes' most vital teammate on offense — especially considering the center is the only player starting at the same position he was in during the Chiefs' Super Bowl run a year ago.

Their bond is strong — pronunciations aside — with the quarterback joining in on a Saturday night meeting tradition among the offensive linemen.

“I mean, I’ve even opened up Pokemon cards with him before, so I think our relationship kind of got on a high level after that," Mahomes joked. “He’s been super important. The center who has been there, can kind of direct traffic, get guys going in the right direction. It’s definitely helped out when you have a different group of guys working on the offensive line.”

Jensen said every quarterback he has worked with, from Brady and Jameis Winston in Tampa Bay to Joe Flacco in Baltimore, has “some sort of unique quirk to them.” And getting to know them is crucial for a center.

“There’s a trust factor in that to make sure we’re on the same page,” Jensen said. “Communication starts with me and Tom to get it out to the other guys. And having a relationship that you trust each other with is huge.”

A lot of that comes with time — and patience. And a willingness by the center to adjust.

Reiter insisted Mahomes doesn't have any noticeable quirks, but acknowledged he hadn't really considered it until he was asked a few times about his quarterback during the weeks leading up to the Super Bowl.

"You just slowly mature — mature to where we may change up the cadences,” Reiter said. “Or he may say one cadence and I can tell in his voice, I’m like, ‘This is what he means.’ I think that’s where like all that time and all those reps come into place.”

And all those baby powder-coated towels. And bruised and battered gloveless hands.

“I would definitely say we’re pretty much on the same page 100% of the time when it comes to how he wants certain looks (identified) and things like that,” Jensen said of Brady. "Over the course of the year, that relationship — in that aspect — has grown tremendously.”