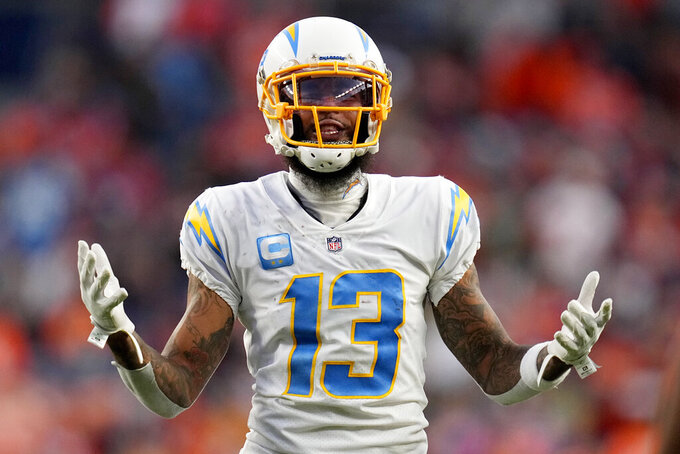 Los Angeles Chargers wide receiver Keenan Allen (13) looks for a call from the referee against the Denver Broncos during the second half of an NFL football game, Sunday, Nov. 28, 2021, in Denver. (AP Photo/Jack Dempsey)

Coach Brandon Staley was optimistic throughout the week that Allen could return, but said on Friday that Allen will be out. Allen, who is in his ninth season, is tied for second in the NFL with 86 receptions and is 71 yards away from his fourth 1,000 yard season in the past five years.

Staley added that wide receiver Mike Williams and cornerback Chris Harris Jr., who were close contacts, are trending toward coming off the reserve/COVID-19 list on Saturday. The five-day quarantine period for both players started Monday. If they have five straight days of negative tests, they can be activated.

Williams, who is in his fifth season, already has a career high with 55 receptions. He had his third 100-yard receiving game in last week's 41-22 victory over Cincinnati with five catches for 110 yards. Williams also leads the league with seven catches of at least 40 yards.

Jalen Guyton and rookie Joshua Palmer will have additional snaps in Allen's absence. Guyton had four receptions for 90 yards, including a 44-yard touchdown, against the Bengals.

The Chargers have had a recent run of COVID-19 cases. Defensive tackle Linval Joseph missed the last three games, while defensive lineman Jerry Tillery, Christian Covington and linebacker Drue Tranquill missed at least 10 days last month. Linebacker Joey Bosa sat out five days and tested negative leading up to the Nov. 21 game against Pittsburgh because he was an unvaccinated close contact.

Backup center Scott Quessenberry will also miss the game after being placed in protocols on Thursday.