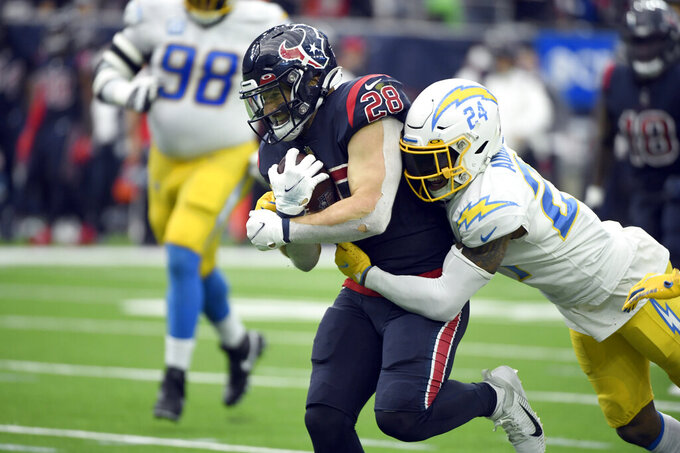 Houston Texans running back Rex Burkhead (28) is tackled by Los Angeles Chargers' Nasir Adderley (24) during the second half of an NFL football game Sunday, Dec. 26, 2021, in Houston. The Texans won 41-29. (AP Photo/Justin Rex)

Joey Bosa and Derwin James can do plenty of things to mask a subpar season for the Los Angeles Chargers defense.

Without either in the lineup, the defense’s fatal flaws for most of the year were ripe for the picking by the Houston Texans in Sunday’s 41-29 loss.

The Chargers’ run defense has struggled all season. Without Bosa, James, defensive lineman Justin Jones and cornerback Michael Davis, they allowed 5.3 yards per carry and a career-best 149-yard, two-touchdown day by Rex Burkhead. Houston’s 189 yards on the ground marked the sixth time they allowed at least 175 yards this season.

Los Angeles, whose defense has allowed a league-high 51.1% third-down conversion rate, allowed Houston to go 9 of 13, the 10th time a team has made more than half of its third downs against the Chargers.

“When you look at the film, we were in a lot of eight-man fronts, where we knew exactly the type of runs that were going to be deployed by that team," coach Brandon Staley said. "That’s what they did. We were in a lot of run structures that are designed to take it away, but it comes down to technique, attitude and playing together, playing with that intensity, that energy that the game requires, that it demands, regardless of who you’re playing.

“The NFL demands your full respect. I feel like we didn’t have enough energy and intensity at the game yesterday. That’s why we performed the way we did.”

The poor showing on defense means the Chargers went from holding a wild-card spot to being on the outside and looking for help.

Things don’t get any easier for the Chargers heading into this week’s must-win game against Denver. On Monday, they had two more defensive starters added to the reserve/COVID-19 list in cornerback Chris Harris Jr. and safety Nasir Adderley.

Both are unvaccinated and will miss Sunday’s game. Combined with James and Davis, rookie Asante Samuel Jr. would be the only regular starter.

The starting secondary of Davis, Samuel, Harris, Adderley and James has not started as a group in the same game since Oct. 31 against New England.

Bosa could come out of league protocols Thursday. Jones and Davis, who tested positive before kickoff, remain day to day.

“We haven’t had continuity at any level of our defense this year. It’s exacerbated in the secondary, but our front hasn’t had any continuity, either. We just had a lot of moving parts this year,” Staley said.

“We’ve really had to figure things out. We’re going to need to because there’s a lot of challenges headed our way right now.”

Besides the lack of bodies on defense, the Chargers will be facing a Denver rushing attack that generated 147 yards in its 28-13 win on Nov. 28.

Justin Jackson had 162 scrimmage yards (64 rushing, 98 receiving) in place of Austin Ekeler, who was out after testing positive for COVID-19. The fourth-year running back scored his first touchdown since 2018 and showed consistent bursts to the outside.

The Chargers have wanted Jackson to emerge as the second running back, but injuries throughout his career have derailed any progress he has made.

Justin Herbert had his ninth 300-yard game of the season, but nearly half those yards came in the fourth quarter. For as well as Herbert has done in most areas, the one area he struggles is throwing into tight windows. He was 1 for 3 with an interception against the Texans.

Over the past three games, Herbert is 5 for 18 with a touchdown and two picks when the defender is within 1 yard or closer of the receiver at the time of the completion.

Dustin Hopkins made three field goals, including 46- and 50-yarders, and had a touchback on five of his six kickoffs. Hopkins is 15 of 16 on field goals since joining the Chargers on Oct. 26. The 93.8% accuracy rate is tied for the best start in franchise history.

Alohi Gilman has five missed tackles the past two games he has played, including three against the Texans. The second-year safety missed five games because of a quadriceps injury.

James was active, but didn’t play because he is still dealing with a lingering hamstring issue. ... Linebacker Drue Tranquill suffered a leg injury during the second half and is questionable going into the upcoming week. ... Safety Alohi Gilman, offensive guard Senio Kelemete, defensive lineman Andrew Brown and outside linebacker Emeke Egbule were also added to the COVID-19 list.

126 — Tackles this season by linebacker Kyzir White, the most by a Charger since Donnie Edwards had 143 in 2006.