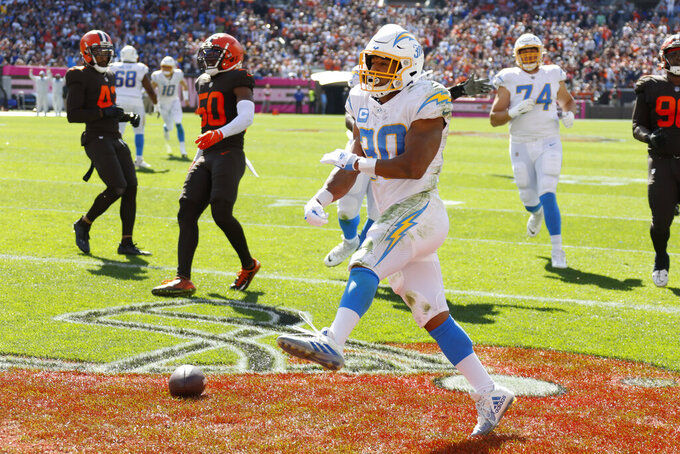 Los Angeles Chargers running back Austin Ekeler (30) spikes the ball after running in for a touchdown against the Cleveland Browns during the first half of an NFL football game, Sunday, Oct. 9, 2022, in Cleveland. (AP Photo/Ron Schwane)

CLEVELAND (AP) — Brandon Staley trusted his gut, the analytics and his offense.

He got very lucky.

The Chargers coach defiantly defended his decision not to punt on fourth down with 1:14 remaining after Los Angeles held on for a 30-28 win over Cleveland when Browns rookie kicker Cade York missed a 54-yard field goal with 11 seconds left.

With his team at its own 46 and clinging to its two-point lead, Staley called a timeout. But instead of punting, he had quarterback Justin Herber t attempt a short pass on fourth-and-1 for Mike Williams that fell incomplete.

The ball went back to the Browns, but York’s kick sailed right and allowed the Chargers (3-2) to escape with a win Staley tried to give away.

Afterward, Staley was adamant he'd do it again.

Cleveland had no timeouts and drove to the Chargers 35 to set up a winning shot for York, but the big-legged draft pick from LSU, couldn't convert. He earlier missed a 45-yard attempt.

“Hit it well, my head was still down, thought it was straight, right down the middle, I looked up and it was just outside,” York said. ”Got to get over it, 24 hours and get over it. It’s the first time I’ve ever missed it twice in a game.”

Herbert, who came in leading the NFL in yards passing, finished 22 of 34 for 228 yards, ending his streak of consecutive road games with at least 300 yards at seven.

While Staley's decision is being second-guessed, Herbert had no issues whatsoever with his coach's call.

“It says a lot that he believes in us as a head coach to get the job done,” Herbert said. "It didn’t go our way, but we’re riding that play and we’re riding with our guys every time.”

Austin Ekeler rushed for a career-high 173 yards and scored twice as Los Angeles, which came in last in the league in rushing, leaned on its ground game to win its second shootout in two seasons with the Browns (2-3).

The Chargers finished with 238 yards rushing, 174 more than their average and showed they can do more than pass.

“It allowed us to control the game and take the crowd out of it," Staley said, "and I think it tired them out a little bit.”

The teams combined for 908 total yards, 53 first downs and there were only three punts — all in the first half.

“Our defense won the game for us,” Staley said. “I love the way we finished.”

Cleveland's Nick Chubb ran for 134 yards and had a 2-yard TD run.

Los Angeles kicker Taylor Bertolet kicked a 27-yard field goal — in his NFL debut — early in the fourth to put the Chargers ahead 30-28. Bertolet was activated from the practice squad earlier in the week and played when Dustin Hopkins was ruled out with a quadriceps injury.

“It’s not easy to come in and do that, but he did a great job,” Herbert said. "He came into practice on Thursday and was perfect then, so we had a lot of confidence in him right away.”

Ekeler had a 22-yard TD run and c aught a 12-yard pass from Herbert.

The Chargers were leading 30-28 when Brissett, who looked as if he could have run for a first down, forced a ball over the middle toward receiver Amari Cooper and was picked off by Gilman.

While Brissett has been OK while filling in while Deshaun Watson serves his 11-game suspension, Cleveland continues to have major issues on defense.

The Chargers pushed the Browns around up front and star defensive end Myles Garrett had little impact in his first game back after he was involved in a car crash.

“It’s definitely frustrating,” Browns cornerback Greg Newsome said. “We know what talent we have in the building. We’re just not showing it every play on Sunday. It’s all about being consistent.”

Players on both teams spent pregame warmups swatting away midges, those small, winged insects that swarm along Lake Erie during the spring and fall.

The bugs made a famous appearance at the 2007 baseball playoffs in Cleveland. New York Yankees reliever Joba Chamberlain was, ahem, bugged by clusters of midges, which engulfed him and affected his performance on the mound.

Chargers: WR Joshua Palmer returned after leaving on the first series with an unspecified injury. ... Starting RT Trey Pipkins III (left knee) also came back after getting rolled up on in the second quarter.

Browns: Pro Bowl CB Denzel Ward sustained a concussion in the fourth quarter and was placed in league protocol.