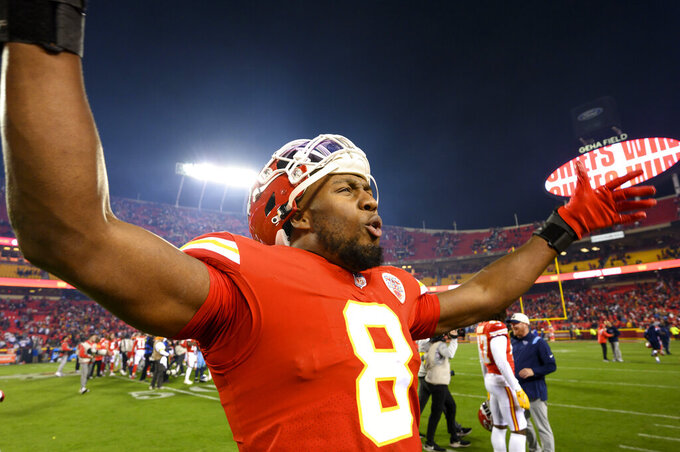 FILE - Kansas City Chiefs defensive end Carlos Dunlap celebrates after they beat the Tennessee Titans during overtime in an NFL football game, Sunday, Nov. 6, 2022 in Kansas City, Mo. Dunlap needs just half of a sack to reach 100 for his career. And with the Chiefs missing the suspended Frank Clark for one more week, he could well get it when the Kansas City Chiefs play the Jacksonville Jaguars on Sunday, Nov. 13. (AP Photo/Reed Hoffmann, File)

KANSAS CITY, Mo. (AP) — The Kansas City Chiefs were trying to put away the Tennessee Titans in overtime last weekend when Carlos Dunlap and Chris Jones reached the quarterback at the same time, dragging Malik Willis to the turf for a sack.

Each was given credit for half the sack.

The decision by a stats keeper in the press box high above Arrowhead Stadium left the 33-year-old Dunlap with 99 1/2 for his career, and kept him from joining the exclusive 100-sack club by that half-sack that went to his teammate.

Jones said it all with a smile, and for good reason: Dunlap has become one of the more popular players in the locker room in less than a season in Kansas City. His personality fits perfectly with the happy-go-lucky attitude of the rest of the team, and his play on the field — especially with starter Frank Clark serving a two-game suspension — has been invaluable.

Dunlap finished with 1 1/2 sacks against the Titans, and he has 3 1/2 this season, leaving the two-time Pro Bowl pass rusher chasing the century mark when the Jaguars visit Arrowhead Stadium on Sunday.

“They just don't give out sacks round here,” Jones said. “You know what I mean? That's special, man. Guys play a long time in this league and never achieve that type of accomplishment, so kudos to him.”

There have only been 40 players to reach 100 sacks since the NFL began recording the statistic in 1982. The list includes 13 players that have been voted into the Pro Football Hall of Fame — luminaries of the game such as Reggie White, Bruce Smith and Kevin Greene — and players such as Julius Peppers and Terrell Suggs that could be there soon.

Dunlap is eighth among active players; Von Miller leads that list with 122 1/2 sacks with the Broncos, Rams and Bills.

“That's not my sole goal," Dunlap said of reaching the century mark, "but that's just a milestone and something that I told my dad that I was going to do, so it's important to me to get that done. I need 108 or 110 to be in that legendary-type of conversation, top 50 ever and stuff like that, so those are real goals.

"But I promised by dad that I was going to do 100 and obviously losing him this year, getting that 100 this season is important to me."

Dunlap began the season playing less than half of defensive snaps, but the number has steadily increased as he has gotten more comfortable in coordinator Steve Spagnuolo's system. He played a season-high 46 against the 49ers before the Chiefs had their bye, then played a season-high for percentage of snaps in Sunday night's win over the Titans.

That coincided with Clark serving the first game of his suspension for violating the NFL's personal conduct policy.

“He played solid. Those (sacks) are key moments and big plays, and we always want guys making big plays,” Spagnuolo said, “(but) Carlos played solid in the other parts of the game that you don't normally see.”

Dunlap got his 1 1/2 sacks against run-oriented Tennessee despite Willis throwing just 16 passes in the game. He figures to get more opportunities — and maybe that half-sack he needs — against the Jaguars' Trevor Lawrence on Sunday.

“I'm a firm believer you let those things take care of themselves,” Spagnuolo said. “I hope he gets it and more. I hope he doesn't get to 100 and stops there. But I do hope he accomplishes it in the next game.”

NOTES: WR Mecole Hardman (abdominal injury) and DT Khalen Saunders (personal issue) did not practice Thursday. ... WR JuJu Smith-Schuster, who signed a one-year deal with the Chiefs, acknowledged Thursday that “I would love to stay here, to be honest.” He has 44 catches for 582 yards and two touchdowns this season. ... Special teams coach Dave Toub said he's not concerned about K Harrison Butker, who missed a field-goal attempt and an extra point against Tennessee. “He's got a lot of pelts on the wall for us,” Toub said. “He's a guy that I know he's going to bounce back from his little dip he's had.”