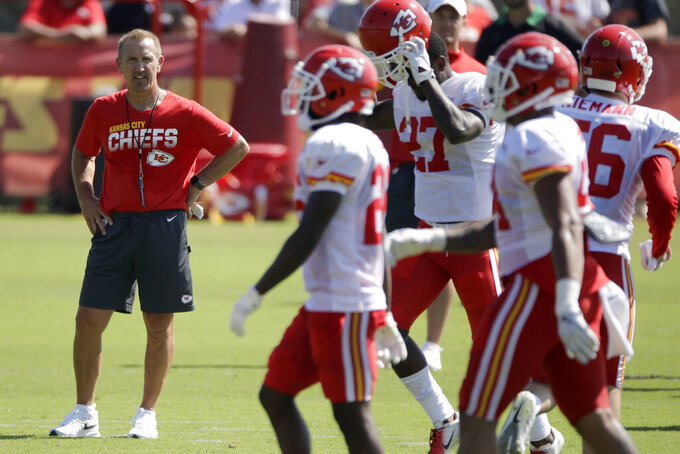 FILE - In this July 29, 2019, file photo, Kansas City Chiefs defensive coordinator Steve Spagnuolo watches a drill during NFL football training camp, in St. Joseph, Mo. There's a good chance Juan Thornhill will start at safety for the Chiefs in Week 1. That bucks a trend not only for coach Andy Reid but also defensive coordinator Steve Spagnuolo when it comes to rookies.(AP Photo/Charlie Riedel, File)

As part of a vast offseason overhaul of the Kansas City defense, the Chiefs released longtime safety Eric Berry and several other backups. Then, they used a second-round draft pick on Juan Thornhill, hopeful that the big-play ability he showed at Virginia would translate quickly to the NFL.

So far it has.

Of all the youngsters to make an impression in training camp, the ball-hawking centerfielder in the No. 22 jersey stands out. He has made a habit of breaking up passes while covering speedsters Tyreek Hill and Sammy Watkins, and more than once he has baited Patrick Mahomes into an interception.

"We got to see him play corner and safety in college. He did a little of each," Chiefs coach Andy Reid said. "The one consistency was that he made plays at both spots. He's doing that out here. Early on, he was getting his hands on the ball but he wasn't getting the picks. Now he's making the picks."

One of the biggest problems last season was the back end, where Berry was sidelined nearly the entire season by injuries and his fill-ins weren't particularly good. The Chiefs addressed the issue by giving a big contract to Tyrann Mathieu and then selecting Thornhill in the draft.

"I've been playing a bunch of safety spots right now," Thornhill said, "but like I said, I will step in and play any position that they need me to play — like, if I need to play nickel, safety, corner, it really doesn't matter. I'll just step in and do what I have to do to help the team."

Thornhill was listed second behind veteran Daniel Sorensen on the initial depth chart released for Saturday night's preseason opener against Cincinnati. But what shows up on paper is far different from what has shown up on the practice field: Thornhill has been running with the No. 1 defense just as much, and there are times that all three safeties have been on the field at once.

He clearly has the most upside. The trick now is finding his ceiling as quickly as possible.

"When we first got out there a bunch of our guys were playing a little slow because guys didn't really know what was going on. I mean everything was pretty much new to everybody," Thornhill said. "But now since we had OTAs and minicamp, guys are picking up things a lot faster and picking up the defense and we are making a lot more plays, so that is definitely helping us."

Thornhill isn't the only rookie the Chiefs are eager to see against the Bengals.

Wide receiver Mecole Hardman, their other second-round pick, and defensive tackle Khalen Saunders, their third-round selection, are among seven rookies that showed up on the initial two-deep. And that doesn't include running back Darwin Thompson, who could supplant Carlos Hyde and Darrel Williams for the No. 2 job with a good showing in preseason games.

"They're improving. In general, I'd tell you that they're improving every day," Reid said of his rookie class. "They're working hard at it. One advantage of being up here (at Missouri Western) is that there's not a lot else to do other than meet, eat and practice."

Reid showed the same reluctance as Spagnuolo to start rookies early in his career, but that has changed in Kansas City. Left tackle Eric Fisher, cornerback Marcus Peters, defensive tackle Chris Jones and wide receiver Hill are just some of the first-year players to start meaningful games.

All of them earned their jobs during the offseason and training camp.

Thornhill appears to be following in their footsteps.

NOTES: The Chiefs finalized a one-year deal with CB Morris Claiborne on Friday. They had reached an agreement Thursday but needed Claiborne to pass a physical and sign the contract. He will miss the first four games of the season for violating the NFL's substance-abuse policy. ... Reid said Mahomes and the rest of the starters will play the first quarter Saturday night. Backup QB Chad Henne will get the second quarter, third-stringer Kyle Shurmur will get the third and Chase Litton the fourth.