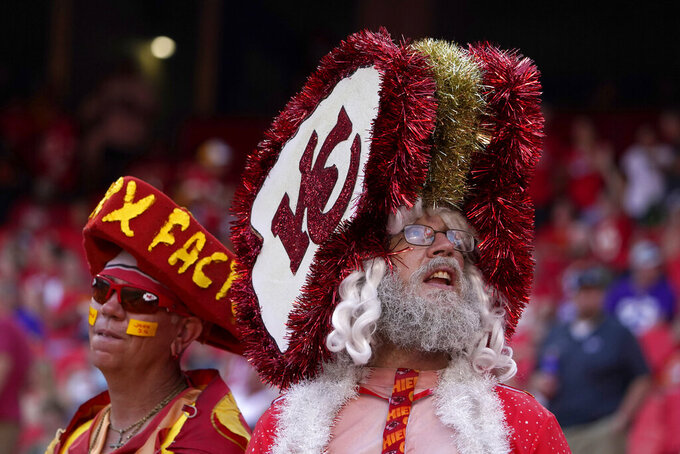 Fans are seen before the start of a preseason NFL football game between the Kansas City Chiefs and the Minnesota Vikings Friday, Aug. 27, 2021, in Kansas City, Mo. (AP Photo/Ed Zurga)

KANSAS CITY, Mo. (AP) — The Kansas City Chiefs chose to keep 10 offensive lineman after rosters were trimmed to 53 for the start of the season this week, and four of them have experience playing in their past two trips to the Super Bowl.

All four of them are now backups, too.

After their front was embarrassed by Tampa Bay in February, dashing the Chiefs' chances at back-to-back Lombardi Trophies, general manager Brett Veach went to work. He traded for two-time Pro Bowl left tackle Orlando Brown Jr., signed the premier free-agent left guard Joe Thuney, drafted the consensus No. 1 center prospect Creed Humphrey and made sure that Lucas Niang — who opted out of his rookie season — was ready to go for this season.

Five new offensive linemen to protect Patrick Mahomes, an upgrade that was glaringly necessary when put into this context: Nick Allegretti, Andrew Wylie and Mike Remmers were brought back as depth pieces after starting in the Super Bowl, and Laurent Duvernay-Tardif returned as a backup after starting their Super Bowl win over San Francisco.

“I think you can't have enough of those guys, first of all. We know that,” coach Andy Reid explained, “and they're good players. Then there is the competition amongst them, so that's also a plus.”

Of course, there are other keys to success for Kansas City this season. Mahomes needs to continue to flourish with Tyreek Hill, Travis Kelce and the rest of his playmakers, and a young defensive backfield needs to hold its own this season.

But whether the Chiefs win a sixth consecutive AFC West title could come down to that most unglamorous position group, and whether they live up to some soaring expectations despite being thrown together just this past summer.

Brown and Thuney have experience, starting 122 games between them, but nobody manning the other three spots on the offensive line has started a single regular-season game.

Compare that to the Chiefs' group of backups, which have combined for 258 starts — most of them with the Chiefs — and those four impressive starts in the Super Bowl.

“I've started a number of rookies in there and they've done a good job,” Reid said. “Sure, you like to have experience, but again, I've had success with rookies, too, so it's kind of individually based in how they step up and communicate and how willing the veteran players are to share with them their experiences.”

As the Chiefs begin preparing for their season opener against Cleveland on Sept. 12, here are some other things to know:

Charvarius Ward and L'Jarius Sneed are back to start at cornerback in the base defense and Mike Hughes, who was the Vikings' first-round pick in 2018, is expected to be the other starter when the Chiefs go to a nickel package. But the key is safeties Juan Thornhill and Tyrann Mathieu, who have plenty of experience and playmaking ability.

The Chiefs knew they needed to put more pressure on the quarterback this season, but rather than sign another defensive end with their limited salary cap space, they got creative by moving defensive tackle Chris Jones to the outside.

The move appeared to pay off in preseason with Jones getting plenty of pressure opposite Frank Clark. But the real reason it has worked is free-agent acquisition Jarran Reed, who has replaced Jones at defensive tackle without missing a beat.

IT'S A WIDE, WIDE WORLD

The Chiefs allowed Sammy Watkins to walk in free agency, though it was no great loss given how much the veteran wide receiver was hurt. They tried to add depth by drafting Cornell Powell in the fifth round, but he was cut this week, so the Chiefs are rolling with Hill and holdovers Mecole Hardman, Demarcus Robinson, Byron Pringle and Daurice Fountain.

Kelce won't be alone in the tight end room this season. Nor will he be alone on the field. The Chiefs chose to keep four at the position, including Blake Bell, rookie Noah Gray and quarterback-turned-wide receiver-turned-tight end Jody Fortson.

In fact, the Chiefs used all four at once in a goal-line package in their preseason finale. Scored a touchdown, too.

The Chiefs face one of the league's toughest schedules this season, but it is front-loaded with playoff contenders.

Their game against the Browns is a rematch of their divisional-round game, and their Week 2 trip is to another divisional playoff team in Baltimore. The Chiefs return home to face the Chargers, likely their toughest AFC West opponent this season, then face the Eagles before an AFC championship rematch against the Bills on Oct. 10.