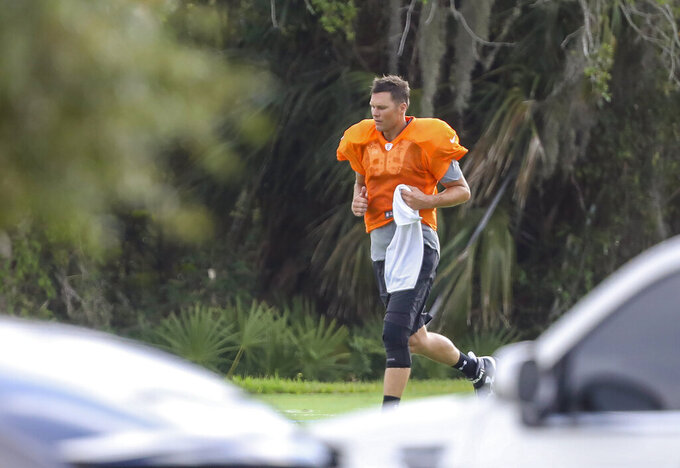 FILE - In this May 19, 2020, file photo, Tampa Bay Buccaneers NFL football quarterback Tom Brady runs across the field at Berkeley Preparatory School in Tampa, Fla. With coaches and players scattered and team facilities shut by the NFL because of the COVID-19 pandemic, video meetings helped the league act as if business continued as usual. “Walking through and practicing is the best way to teach,” Tampa Bay coach Bruce Arians said. “So those are valuable reps missed. I don’t know how we’ll make them up. Hopefully we’ll get some extra time in practice in camp; a few extra days would help." (Chris Urso/Tampa Bay Times via AP, File)

NASHVILLE, Tenn. (AP) — Turns out there’s only so much that can be done virtually.

With coaches and players scattered and team facilities shut by the NFL because of the COVID-19 pandemic, video meetings helped the league act as if business was continuing as usual. Some coaches decided their teams had done everything possible until players are allowed to join them inside team headquarters and on the practice fields.

That won't happen until July at the earliest when training camps are set to open, with coaching staffs trying to make up for lost time. Rookies face the biggest challenge having missed an estimated 400 repetitions on the field during a normal offseason.

“Walking through and practicing is the best way to teach,” Tampa Bay coach Bruce Arians said. “So those are valuable reps missed. I don’t know how we’ll make them up. Hopefully we’ll get some extra time in practice in camp; a few extra days would help."

Players have been working out — yes, including that new guy in Tampa, Tom Brady. With so many states reopening, quarterbacks are getting teammates together for workouts at a time they might've been in a final minicamp to cap the offseason program.

This very different offseason has allowed players to slow down a bit, focus on communication, and learn more than when everyone is together in person.

“It actually probably has provided a better opportunity to kind of share your input of `this is why I did this’ or ‘maybe on this route, do this,’ or ‘this is what you’re trying to make this look like.’ Things like that,” Vikings wide receiver Adam Thielen said.

San Francisco cornerback Richard Sherman has seen a ton of growth out of the 49ers.

“This time everybody has to step back in and slow it down and take their time,” he said. “Guys are learning more and understanding more than they ever have.”

The last time the NFL had a disrupted offseason was 2011 when clubs locked out players during labor negotiations. Players didn't have access to coaches or playbooks then, though they could work out together.

Now players have access to coaches thanks to technology. But workout options are so limited for some players that Bills special teams coordinator Heath Farwell said he was disappointed when he saw a video of what wide receiver/returner Andre Roberts lifted in place of weights.

“What is he a 10-plus year veteran and doesn’t have workout equipment?" Farwell said. "He’s literally lifting a couch. It’s crazy to me. But that’s finding a way to do it.”

Five NFL teams have had to be very creative with new coaches. Imagine having a new team and nothing on tape with their new players. Washington coach Ron Rivera credits his assistants with finding clips and cut-ups of video showing their style of play to help install his own offensive and defensive schemes.

Rivera had hoped to be in the second or third phase with players on the field by June. It never happened.

“The hard part, too, is we’re getting a little bit repetitive, a little redundant,” Rivera said. "It’s been almost to a point where we’re going to over-saturate these guys. We have to be careful with that.”

Video chats don’t quite replace being able to pull a coach aside for an extra 15 minutes after a meeting. To Redskins quarterback Dwayne Haskins, that’s been the biggest challenge while preparing for his second NFL season, this one with a new coach.

“I’ve been able to do my own type of routine to get ready for the season,” Haskins said. “It’s not always on the time that we’re doing (together) because, we do things as a team and I need things differently for myself, so, this virtual offseason I feel actually has helped me tremendously.”

“You have to think outside the box to initiate conversation, to teach new methods, to learn new testing systems with what we have,” Daboll said. “And you know, we have to do the best that we can do with the technology that we have, and we have. Again, how that translates we’ll find out. This is a unique situation for all of us.”

“You go on there, you press in their code and then all of a sudden everybody is on there,” Vrabel said. “They’re going against each other and you get points for time and getting it correct. We do a great job of being creative and testing the players each week.”

Video also helps make up for not meeting in person. Those video meetings are recorded, which doesn't happen in a normal offseason.

“Now, it is in a library,” Browns offensive coordinator Alex Van Pelt said. “You can always go back to install three. You can pull up the recordings again and refresh yourself. There are some benefits to it, but it has been different and unique. I think we are getting the most out of it that we can.”

How all this worked will be tested once teams report for training camp. Coaches hope for extra time, which must be agreed upon by both the NFL and the players association. Currently, most teams are allowed to report 47 days before their season opener.

“It’s crazy how I almost feel like 2020 just started, but we’re almost right to that time where we’re a month from camp,” 49ers coach Kyle Shanahan said. "It’s been weird just being stuck in here, but I know our guys are as ready as they can ever be mentally and we’ll see how they are when they show up at camp.”