Colts counting on Wentz to rebound from frustrating start 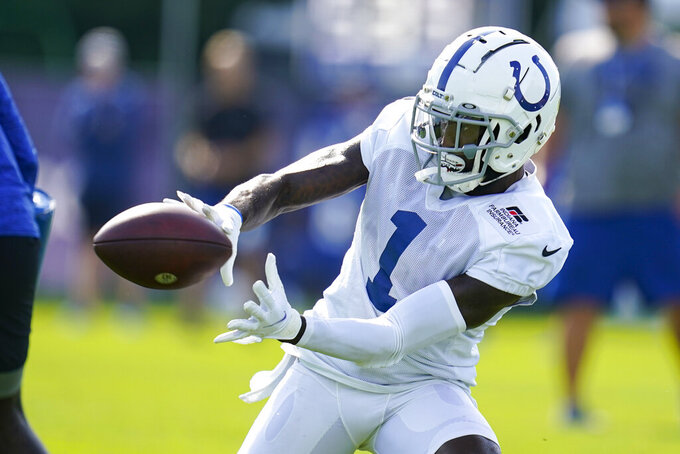 INDIANAPOLIS (AP) — Quarterback Carson Wentz wanted a fresh start in Indianapolis. Instead, it seems he's seeing and hearing more of the same.

He missed three weeks with an injured left foot, returned to practice for three days of limited work before landing on the reserve/COVID-19 list. Now it's unclear whether he'll start the Sept. 12 opener against Seattle, and coach Frank Reich is defending Wentz from scrutiny over his vaccination status.

At least Wentz knows Reich is one of his biggest fans. They developed a strong working relationship during Wentz's first two NFL seasons and created a strong bond behind the scenes because they shared similar values and religious beliefs.

In fact, Reich lobbied in favor of making the deal with Philadelphia, hoping Wentz would help stabilize a position that's been a virtual turnstile since Andrew Luck missed the 2017 season. Regardless of who starts the opener, Wentz or backup Jacob Eason, it will be Indy's fourth Week 1 starter in four years.

“It’s going to be up to the doctors" Wentz said when asked about the foot. “As long as there’s nothing I can do to injure myself or make it worse, I know I’ve played through a lot worse."

If he stays healthy and productive, Wentz could benefit from what looks like his strongest supporting cast since the Eagles won the Super Bowl following the 2017 season.

Running backs Jonathan Taylor and Marlon Mack each have 1,000-yard seasons on their resume, Indy's offensive line has allowed the NFL's second-fewest sacks over the past three seasons, and Wentz will be working with a group of young, talented receivers looking to replace injured four-time Pro Bowler T.Y. Hilton.

There's also a young, improving defense that ranked among the league's top 10 in yards and points allowed last season. And, not surprisingly, high expectations after the Colts made the playoffs two of the last three years.

The question is whether Wentz can stay on the field long enough to make an impact.

“We’ve been working out ever since the (trade) down and I feel like whenever he gets back, he’s going to be good and he’s going to be ready to go," second-year receiver Michael Pittman Jr. said. “If he’s not, then we have other people who will step up, but we expect Carson to be ready.”

Wentz's addition to the COVID-19 list has raised plenty of questions about one of the league's least-vaccinated teams. Reich's most recent estimation was that roughly 75% of Indy's players have taken at least one COVID-19 shot.

So far, nine Colts players have appeared on the COVID-19 list and four starters were still on it Tuesday: Wentz, left tackle Eric Fisher, center Ryan Kelly and receiver Zach Pascal. Fisher wasn't expected to play until at least late September because he's still recovering from a torn Achilles tendon.

But Reich and defensive coordinator Matt Eberflus both missed time at training camp because of positive tests even though both were fully vaccinated.

“It's an individual decision but it does have consequences and ramifications for the team, and that’s where it makes it so complex," Reich said. “I think what you’re going to hear from most people in that camp is a lot of the decisions to not get vaccinated I think are more family-type reasons. So, what are you going to say about that? A guy is prioritizing his family, is there anything wrong with prioritizing your family?"

Reich played it safe during the first three-game preseason. He rested most of the starters partly to avoid injury and partly to keep them fresh for a 17-game regular season and possibly more in the playoffs.

Reich considered playing some starters Friday night at Detroit but changed his mind when he found out Lions starters wouldn't play. Will it lead to erratic early-season play? The Colts will soon find out.

If the Colts survive a brutally tough first five weeks, things could get much easier.

After hosting the Seahawks and Los Angeles Rams the first two weeks and hitting the road for the next three — at Tennessee, at Miami and at Baltimore — the schedule should ease up. Each of the first five foes won 10 or more games and four made the playoffs.

But they only face three 2020 playoff teams over the final 12 games and two — Oct. 31 against the Titans and Nov. 28 against Tom Brady and Super Bowl champion Tampa Bay — are at home.