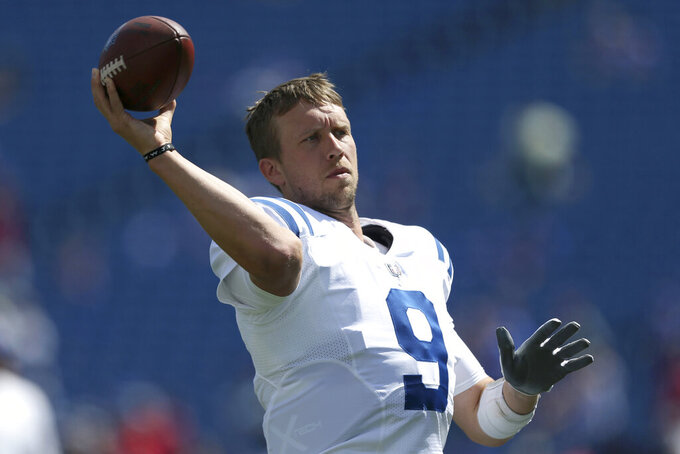 Indianapolis Colts quarterback Nick Foles (9) warms up on the field prior to a preseason NFL football game against the Buffalo Bills, Saturday, Aug. 13, 2022, in Orchard Park, N.Y. (AP Photo/Joshua Bessex)

Eventually, the two quarterbacks started working out at the same offseason facility, developed a friendship and shared a Super Bowl legacy. When they were reunited this week during joint practices between the Indianapolis Colts and Detroit Lions, Nick Foles was added to the club.

"I would say this is probably a unique time," said Foles, one of 22 quarterbacks to be named Super Bowl MVP. “I think when you have three guys that have played in the Super Bowl, it's pretty special to be on one field.”

How unusual is it?

Foles, Lions center Frank Ragnow and Colts safety Rodney McLeod couldn't remember another time it's happened during their careers. And until being paired with Foles this season, the 37-year-old Ryan had never played with a quarterback who threw a Super Bowl pass.

Because it's such a small fraternity and NFL careers are so short, it's unclear when it last happened — outside of perhaps a Pro Bowl.

Since Ryan won the NFC championship in his 2016 MVP season, only eight quarterbacks have made Super Bowl starts and nearly half of those were in Westfield, Indiana, this week.

While he never made a Super Bowl start, he played a key part in Buffalo’s four straight AFC title-winning seasons. In January 1993, he orchestrated the largest comeback in league history to win a wild-card game and keep the streak alive.

Today, he's the only coach with two Super Bowl starters on the quarterback depth chart.

While Goff took advantage of a busted Colts coverage with a 50-yard TD pass Thursday, Ryan was making good throws into tight windows against the Lions defense just about 100 yards away with fans of both teams cheering loudly.

“I haven’t seen a single rep of him (Ryan) because I was on the other field,” Goff said Wednesday. “But it was good talking to him for five minutes. He’s a great dude and a guy I’ve grown to be friends with.”

The defenses didn't get much rest, either.

With Goff trying to lead the Lions to their first playoff berth since 2016 and Ryan and Foles teaming up in a bid to end Indy's two-year postseason absence, they created the constant challenges Reich and Lions coach Dan Campbell expected.

“You want to go up against the best and that’s saying something,” Reich said. “You’ve got a quarterback that led a team to the Super Bowl, that’s rare. As a defensive unit for both sides of the ball, it’s a great opportunity to test yourself.”

The rest of the world won't see much of the quarterbacks during Saturday's preseason game.

Reich said he and Campbell spoke previously about limiting their regular starters during the game, as has become the custom during joint practice week. Foles is expected to play about one quarter.

The Colts also placed rookie tight end Drew Ogletree on injured reserve. The sixth-round draft pick was No. 3 on the depth chart after an impressive camp but tests confirmed he suffered a torn ACL in his right knee Wednesday.

“That’s all it was, thank goodness. It could’ve been other things and it wasn’t, so it’s usually about a nine-month timetable," Reich said.

With no major injuries, no shoving matches, not even a verbal spat Thursday, the three quarterbacks took center stage: Ryan, Foles and Goff, who faced New England in successive Super Bowls. Foles sandwiched his win around the two losses suffered by Ryan and Goff, then with the Los Angeles Rams.

“It's definitely rare," Foles said. “I think all of us right now are just focused on our current foundations and taking the wisdom we've learned from those games and try to bring them with how we play the game now.”