Column: Are you ready for some (more) football! 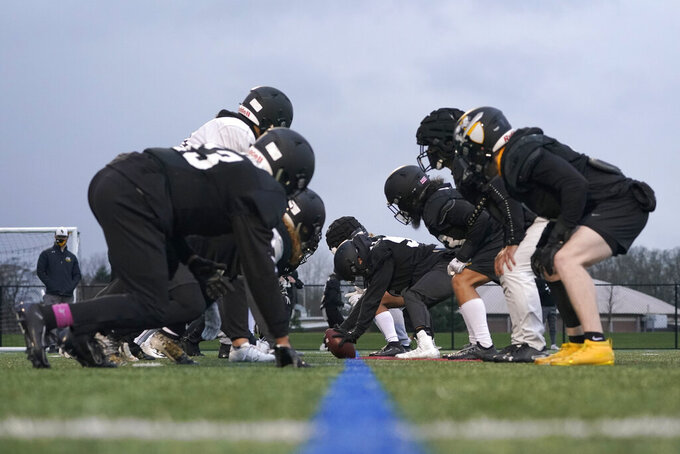 FILE- In this Tuesday, Feb. 2, 2021, file photo, Pacific Lutheran football players wait for the snap on the line of scrimmage during practice in Tacoma, Wash. Are you ready for some (more) football! No need to take a break from the gridiron just because the NFL season is over. Lower-division college teams are ready to kick off their seasons -- snow-covered fields and all -- after sitting out the fall because of the pandemic. (AP Photo/Ted S. Warren, File)

ATLANTA (AP) — Are you ready for some (more) football!

You see, there’s no reason to take a break from the gridiron just because the NFL season is over.

A host of second-division college teams are practicing for their winter/spring season — snow-covered fields and all — after sitting out the fall because of the coronavirus pandemic.

And if you’re really looking for something different: a fan-controlled league is launching this weekend, a sort of video game meets professional wrestling meets arena football that allows viewers to call plays for none other than Johnny Manziel.

That should be at least as entertaining as watching Tom Brady wobble off the boat after Tampa Bay's aquatic Super Bowl parade.

“If the fans call it, I'm gonna roll with it," says Manziel, the former Heisman Trophy winner and first-round NFL draft pick whose downward spiral of a career has left him content to assume a sort of a player-coach role in the upstart Fan Controlled Football league.

Manziel smiles as he adds a quick caveat.

“Now, if a quarterback run comes in, and I feel like I need a breather, I may have to pick a play off the top of my head that looks a little different,” says the Quarterback Formerly Known As Johnny Football. "But that's just me being me. I've always been one to go off script.”

We'll pass on the chance to take a cheap shot at Manziel going way off script in his attempts to become a professional athlete — a pursuit he now says is firmly in his rearview mirror.

Besides, do you remember all those college teams that passed on the chance to play in the fall because of the pandemic?

Well, they're preparing to finally take the field.

The Football Championship Subdivision will begin its abbreviated season Saturday, with teams playing anywhere from four to eight regular-season games. The 16-team playoff follows in April, culminating with a mid-May national championship game in Frisco, Texas.

“It's a unique time, to say the least,” says Brian Bohannon, coach of suburban Atlanta's Kennesaw State Owls. “We've not played a game since December of 2019. To run out of the tunnel again to play football is going to be exciting for me and the kids.”

OK, so it's not quite the level of the Alabama Crimson Tide, who claimed another big boys' national title back in early January, but the FCS provides an exciting brand of football for those willing to look beyond the marquee names.

If nothing else, this is a unique showcase for schools usually relegated to playing in the enormous shadow of the Football Bowl Subdivision.

“We have a great opportunity this spring to really highlight and shine the spotlight on our programs,” says Kyle Kallander, commissioner of the Big South Conference. “This country loves football. There's going to be a lot of attention on FCS football this spring. This is a chance for us to really make our mark.”

Of course, it comes with some enormous challenges.

For one thing, the pandemic still looms large. Though the number of new cases has taken a steep drop in recent days, COVID-19 is still killing thousands of Americans each day, with the death toll likely to reach a half-million by the time some teams are playing their opening games.

It makes you wonder if the FCS would've been better off just going through with its season back in the fall.

But he believes it was a good call to delay the season. There is far more knowledge about how to limit and treat the virus than there was six months ago. Also, millions of people have been vaccinated, raising hopes that the U.S. is finally getting the rampaging plague under come semblance of control.

“Do I wish we could've played in the fall? Sure,” Kallander says. “Would it have been more challenging than it is now? Perhaps. We've learned a lot about protocols, the cadence for testing and how to manage all that, social distancing, how to practice, how to travel. What we've learned over time ... what we learned from those that did compete in the fall is that we can conduct a season in a safe way.”

But there's nothing they can do about the weather.

For schools such as New Jersey's Monmouth University, which is very much miscast as a member of the Big South, these early practices and perhaps even some games will likely be conducted in truly brutal winter weather.

“We're going to build campfires all the way around the practice field so the players can go warm up,” Monmouth coach Kevin Callahan says.

He's only kidding, but it sums up the weather challenges faced by Northern FCS schools.

Then again, maybe it can give them an edge — especially when hosting a Southern opponent.

“If it's snowing, all we're going to do is clear the hashmarks,” jokes Bernard Clark, coach of Pittsburgh's Robert Morris Colonials. “We're not going to put any heaters on their sideline. We're going to do everything we can to take full advantage of this weather.”

Winter won't be a problem for Fan Controlled Football, which begins its inaugural season with four teams playing a seven-on-seven version of the game at an arena in suburban Atlanta.

It's the third straight year that a league has attempted to launch in this time frame — neither the Alliance of American Football nor the XFL2 made it through even one complete season — but this is a far different venture.

FCF games, which begin Saturday night, will be broadcast on the gaming-focused web site Twitch (ask your kids if you have no idea what that is).

Instead of shouting at your TV to pass instead of run, tech-savvy viewers will have a say in everything from play calling to which players make the roster to rules changes they want to see.

To put it another way for all the boomers out there, imagine a real-life video game, but with the chance to control actual players — including Manziel — instead of cartoon characters. (We repeat, no cheap shots.)

“I think we're on a totally separate track that merges the space between video games and traditional sports,” said Sohrob Farudi, the league's co-founder and CEO. “No one is playing there. We want to own it.”

It may not be your parents' football, but at least it's something to help get us through these cold, dark days before the NFL draft.