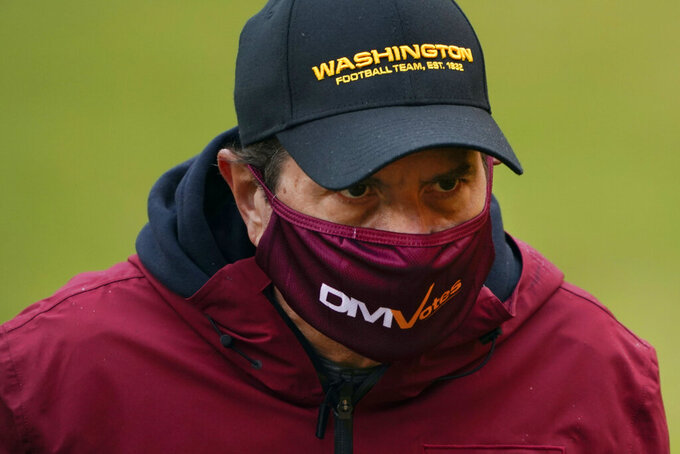 FILE - Washington Football Team owner Dan Snyder walks off the field before the start of an NFL football game against Dallas Cowboys in Landover, Md., in this Sunday, Oct. 25, 2020. AP Sports Columnist Jim Litke says NFL Commissioner Roger Goodell's decision to withhold a league investigation into the toxic culture at the Washington Football Team under owner Snyder has only made fans and now Congress more determined to get a glimpse. Snyder was forced to step away from day-to-day operations and the team was fined $10 million, but the severity of the punishment — and Goodell's insistence on secrecy — has only served to convince some the violations must be worse. (AP Photo/Susan Walsh, File)

If the point of this whole exercise is to protect Dan Snyder’s reputation, it’s at least a decade too late.

Make that two decades. Snyder shot straight to the top of most “Worst Owners in Sports” lists soon after buying the NFL’s Washington franchise in 1999 and hasn’t faced any serious competition since the NBA forced Donald Sterling out in 2014.

Besides, whatever NFL commissioner Roger Goodell hoped to keep under wraps by refusing to release the details of an investigation into Snyder’s Washington Football Team will be known soon enough. If public pressure, or leaks like the email trove that sunk former Raiders coach Jon Gruden don’t accomplish it, then maybe congressional interest will.

Either way, every time Goodell stonewalls calls to make the findings public only makes folks wonder more what else the league might be hiding.

“The really frustrating part,” said attorney Lisa Banks, who represents more than three dozen of the women who alleged sexual harassment and mistreatment while working for the Washington organization, “is that the commissioner is trying to present himself as the champion of all the people who came forward, that he’s doing it to protect them.

“What he’s really doing is acting in a cowardly fashion and hiding behind those very same people. They want the report released and were very open about that,” Banks added. “He’s protecting someone, but it’s certainly not them.”

If nothing else, Goodell knows the double-standard drill. Let a player get caught doing something wrong, and no detail goes unpunished or unpublished. The public report on Tom Brady’s occasional underinflating of footballs – dubbed “Deflategate” – ran more than 240 pages. Then-Dolphins’ lineman Richie Incognito’s alleged use of racial slurs weighed in at 144. Ray Rice’s domestic violence episode generated almost 100.

Contrast that with Colts owner Jim Irsay’s arrest for driving while intoxicated and four preliminary counts of possession of a controlled substance in 2014. Zero pages. Or Panthers owner Jerry Richardson, facing accusations of sexual misconduct, selling the franchise in 2018 just ahead of an investigation. Zip. Or Patriots owner Bob Kraft, who had charges of soliciting sex at a Jupiter, Florida, spa dropped thanks to some expert lawyering. Nada.

The fact is, the NFL relies on the loyalty of fans to forgive and forget, or else get distracted by the league’s uncanny ability to generate storylines week in and week out. A month ago, Jaguars coach Urban Meyer’s antics in a bar dominated the headlines. Two weeks ago, the leak of Gruden’s racist, homophobic and misogynistic emails — mostly written when he worked for ESPN – led to his resignation and a wealth of material for TV and radio sports talk shows. Almost nobody is talking about Gruden now.

Whether the league’s latest investigation fades into the background will likely depend on how serious the House Oversight committee takes its responsibility. The NFL report, conducted by lawyer Beth Wilkinson, was completed in July and examined 650,000 documents and heard testimony from 150 witnesses. But per NFL instructions, the only conclusions made public in a 29-paragraph statement was that Snyder’s franchise operated in a “highly unprofessional” manner “particularly for women.”

The team was fined $10 million and Snyder turned over day-to-day supervision of operations to his wife, Tanya.

“We have no way to know the extent of the wrongdoing, so we have no idea whether the accountability is there,” said Banks. “When an organization does an internal investigation, they show their work to restore public faith. Exactly the opposite has happened here. …

“But the Congress has oversight and subpoena power. We’re pushing on that lever, too. And maybe there are a few other owners with a conscience who will join (Raiders owner) Mark Davis and call for release of the report.”

Fat chance of that happening. While Jaguars owner Shad Khan called the league’s handling of the matter “unsatisfying,” his Dallas counterpart, Jerry Jones, gave his approval. Or maybe Jones was just hoping to keep a perennial loser like Snyder in the same division.

In the meantime, Snyder’s reputation continues circling the drain. Former NFL executive Andrew Brandt got the latest hit in, taking to Twitter to recount a story from a friend.

“I grew up a diehard Washington fan, tough to see/comment,” Brandt wrote. “But lost my fandom when my friend went to pick up daughters at Daniel Snyder’s house; they were at play date with Snyder’s daughters. My friend: ‘Thanks for having my girls over, Dan.’