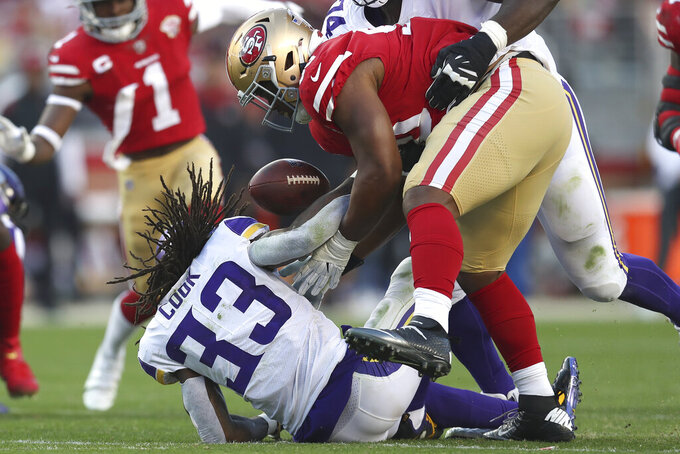 Minnesota Vikings running back Dalvin Cook was taken off the field on a cart with a shoulder injury in the third quarter of a 34-26 loss to the San Francisco 49ers on Sunday.

Cook went down after losing a fumble and stayed on the ground for a while before being taken to the locker room. Cook had 10 carries for 39 yards and six catches for 64 yards before getting hurt.

The Vikings’ biggest rival, the NFC North-leading Green Bay Packers, lost wide receiver Randall Cobb to a groin injury during their 36-28 win against the Los Angeles Rams. Cobb caught four passes for 95 yards and a touchdown in the first half and didn’t play the second half.

Packers safety Darnell Savage walked slowly to the sideline after taking a hard hit on an onside kick by the Rams in the final seconds and Rams punt returner J.J. Koski hurt a hamstring.

The Tennessee Titans’ already extensive list of injured players grew longer during a 36-13 blowout loss at New England and lost control of the AFC’s No. 1 playoff seed.

Tight end Tommy Hudson walked off on his own power with an ankle injury in the second quarter. Linebacker Monty Rice was helped off the field with an ankle injury later in the period and did not return. Cornerback Jackrabbit Jenkins was shaken up in the third quarter. David Long (hamstring), running back Jeremy McNichols (concussion) and defensive lineman Teair Tart (ankle) were also all out.

The Titans were already without star running back Derrick Henry, the reigning NFL Offensive Player of the Year who missed his fourth straight game with a foot injury, and wide receiver A.J. Brown (chest), who on Saturday became the Titans’ 17th player on the injured reserve list.

Cleveland offensive tackle Jack Conklin, who returned from an elbow injury, hurt his knee in the first quarter of the Browns' 16-10 loss at Baltimore. He tried to walk off gingerly, but then his right knee seemed to give out. Browns tight Harrison Bryant hurt an ankle. He and Conklin will both have MRIs.