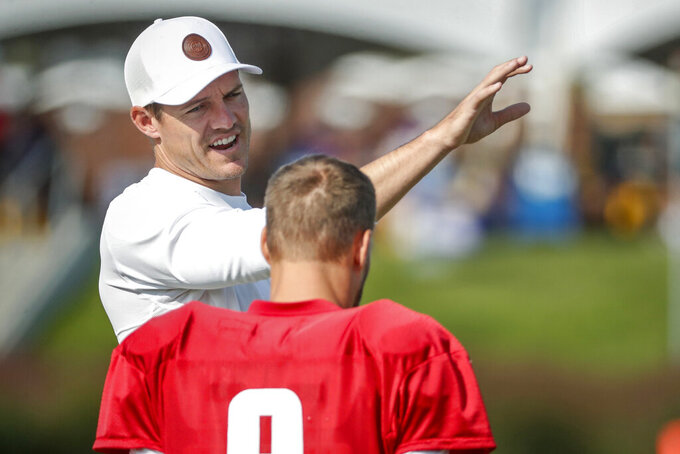 For a quarterback long at his best when his surroundings in both the facility and the pocket are stable, this carousel of offensive coordinators has not been ideal.

The systems themselves haven't changed all that drastically, though, and new head coach Kevin O'Connell has brought the welcomed perspective of a former quarterback and a big slice of the offense the Los Angeles Rams used to win the Super Bowl last season.

Above all else, Cousins still has Justin Jefferson and Adam Thielen running hard-to-guard routes up and down the field and Dalvin Cook behind him waiting for a handoff.

“We’re all learning this together, but we’ve also played some meaningful snaps together too and we’ve got banked reps and some good memories on these fields together, so that’s kind of a comforting thing,” Cousins said.

From the new staff to the well-regarded scheme to the returning skill-position stars, Cousins has about as favorable of a situation as he's had in his 11-year NFL career to build on the unfulfilled resume that includes a 59-59-2 record as a starter and only one playoff win.

With the Vikings having signed Cousins to a third salary-cap-gobbling contract this spring because new general manager Kwesi Adofo-Mensah was hesitant to start over at this vital position and give up the certainty of his high-floor ability.

Instead, Minnesota is banking on O'Connell and his staff to get a more consistently higher level of performance out of a well-proven player who has yet to cross that intangible threshold into the league's top tier.

As long as he's got a trio like Jefferson, Thielen and Cook healthy and at his disposal, Cousins ought to have a fighting chance to find that next gear.

“We’ve been working with each other for two years now, so that connection is always growing every single practice, every single play,” said Jefferson, whose 3,016 receiving yards are the most in NFL history for a player's first two seasons.

O'Connell's first foray into game management, play calling and player leadership will be under just as much of the spotlight as the much-scrutinized quarterback. That all starts on Sept. 11 when the Vikings host rival and defending NFC North champion Green Bay.

Jefferson has looked in training camp every bit the part of the best wide receiver in the league that he has stated his goal to be, and judging by age alone there's clearly room for more ascension for the player nicknamed “Jet” by his teammates and fans.

“I feel like my game can go up even more than what it has been,” Jefferson said. “It’s really just more focused on the team at this point. We’re trying to get back to that winning record. I hate losing. I’m a competitive person. I’ll be satisfied once we win the big goal.”

After lagging badly over head coach Mike Zimmer’s last two seasons, the defense will again be relying on a group of largely unproven cornerbacks next to veteran Patrick Peterson. Safety Harrison Smith and linebacker Eric Kendricks are still entrenched in their roles, though, and the arrival of Za'Darius Smith and the return of Danielle Hunter has given the Vikings a dangerous pair of outside pass rushers for new defensive coordinator Ed Donatell's 3-4-based system.

Hunter and Smith were each sidelined by major injuries last year, primed for an impactful comeback behind their 105 combined career sacks.

The Vikings will have yet another new starting right guard — an almost unfathomable seventh in seven years. Over that span, they've given 12 different players at least one start at this problematic position including Oli Udoh (14) and Mason Cole (three) last season.

Rookie Ed Ingram Jr., who was drafted in the second round out of LSU, has emerged as the front-runner ahead of veterans Jesse Davis and Chris Reed. Reed has also been in competition at center, where the Vikings have been pushing incumbent Garrett Bradbury.

“I've showed myself that I can roll with the big boys, so I just want to keep proving to myself that I belong in that position,” Ingram said.

The Vikings have a prime opportunity to take early control of the division, getting NFC North foes Green Bay, Detroit and Chicago as their first three home opponents and having their road game against New Orleans on Oct. 2 in a neutral venue in London.

They'll be in the elements in the last two weeks, though, at the Packers on Jan. 1 and at the Bears to finish the regular season on Jan. 8. November won't be easy, either, with trips to Washington and Buffalo followed by home games against Dallas and New England — on Thanksgiving night.