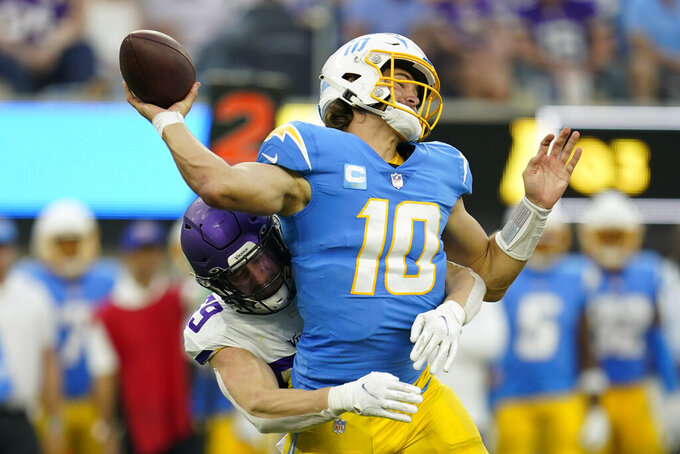 INGLEWOOD, Calif. (AP) — Mike Zimmer said earlier in the week that his Minnesota Vikings still had plenty of fight. On Sunday they proved it, and possibly put their season back on track.

The Vikings bounced back from two straight close losses and one of the most tumultuous weeks of Zimmer's eight-season tenure with a 27-20 victory over the Los Angeles Chargers.

“I told the the team it takes a lot of courage to fight through adversity when everybody’s shooting arrows at you," Zimmer said. "They came here to work and they fought like crazy all week, like they always have, and it finally paid off.”

The Vikings, whose five losses this season have been by a combined 18 points, came into the game with five players on the COVID-19 list, including starting safety Harrison Smith and center Garrett Bradbury. They also were missing four other defensive starters because of injuries.

As if the health issues were not enough, a former girlfriend of Cook filed a civil suit last week, alleging the running back assaulted her during an altercation at his home last year. Cook’s attorney said his client was assaulted by the woman and had the right to defend himself.

None of that seemed to faze the Vikings (4-5), who had the ball for over 36 minutes and closed within a half-game of Carolina for the NFC's final playoff spot.

Kirk Cousins threw a pair of touchdown passes to Tyler Conklin and Dalvin Cook rushed for 94 yards and a score. Justin Jefferson, who had only five catches in the past two games, tied a season high with nine receptions for 143 yards.

“I feel like any receiver would be a little frustrated for just wanting to be a big part of the offense, wanting to make big plays, be a big part," Jefferson said. "This game, we stressed about giving me the ball, giving me the opportunity to go make plays, and definitely grateful for that and making those plays.”

Los Angeles (5-4) has dropped three of its past four. Justin Herbert was 20 of 34 for 195 yards with a touchdown and interception. Keenan Allen had eight catches for 98 yards.

“We went through stretches offensively where there were too many three-and-outs in the first half. We have to execute more consistently. It is the same with defense and kicking game,” coach Brandon Staley said.

The Vikings went up 13-3 in the second quarter on a 5-yard touchdown pass from Cousins to Conklin. Minnesota had a short field to work with following a diving interception by Eric Kendricks at the Chargers 31.

“I thought he made a great play. That's a tough situation and one of those things where maybe you have to move on to your next read,” Herbert said.

Los Angeles scored on touchdowns by Larry Rountree and Austin Ekeler for a 17-13 lead.

Minnesota then regained the lead with 2:33 remaining in the third quarter. On fourth-and-goal from the 1, Conklin was open in the back of the end zone on a crossing route after Chargers safeties Derwin James and Alohi Gilman ran into each other.

Cook extended the Vikings' advantage to 27-17 early in the fourth quarter on a 1-yard run. The 24 carries by Cook was the second-most he has had this season.

“Dalvin is a extremely resilient, competitive person that is a great team leader," Zimmer said. “I’m proud of him. I love the way he plays.”

Dustin Hopkins' second field goal got the Chargers within a touchdown, but they didn't get the ball back. Cousins connected with Adam Thielen for an 18-yard completion on third-and-18 from the Minnesota 46, and Cook had a 4-yard gain on fourth down to allow the Vikings to run out the clock after the Chargers burned all their timeouts.

“I thought both fourth-down calls were great. They hit. I think we needed both of them too, to be able to win that game," said Cousins, who completed 25 of 37 passes for 294 yards.

The Chargers rookie dived from a yard out to get Los Angeles within 13-10 late in the second quarter. Once he crossed the goal line, the sixth-round pick performed a dance that had elements of breakdance and Hall of Famer Ray Lewis’ famous pregame routine.

Ekeler gave the Chargers their only lead when he caught a 2-yard TD pass from Herbert on the opening drive of the second half to make it 17-13. That was also the 20th receiving score of Ekeler’s five-year career, making him the youngest running back in the common draft era (since 1967) to reach that mark. He is 26 years, 181 days old.