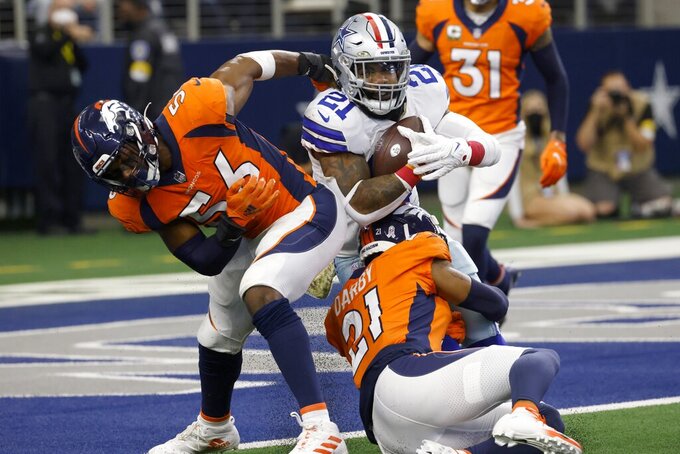 ARLINGTON, Texas (AP) — Dak Prescott and the Dallas Cowboys had their offense back on the field ready to line up deep in Broncos' territory after a big special teams play early in the second half. They didn't even get a chance to snap the ball.

On a day when the NFC East-leading Cowboys and their NFL-best offense didn't score until after being down by 30 points in the fourth quarter, they didn't get to keep the ball after blocking a punt in a 30-16 loss to the Denver Broncos.

“It’s the height of disappointment,” Cowboys owner Jerry Jones said. “It’s putting the cake out in front of you and letting you put your finger in the icing and then turning around and taking the whole (thing) back.”

Already down 16-0 on Sunday, the Cowboys' defense had a three-and-out to start the second half. Malik Turner then blocked the punt, but rookie cornerback Nahshon Wright touched the ball after it crossed the original line of scrimmage, and it was recovered by Denver linebacker Jonas Griffith at the 19. That was 12 yards short of what the Broncos needed for a first down, but they kept the ball and drove for another field goal.

“It’s a big play, and a tough lesson to learn there,” Cowboys coach Mike McCarthy said. “That would have been a huge momentum play for us, especially coming in at halftime. You have a chance to reset your jaw, and you get back out there and get three-and-out, and block the punt, and in scoring position. And you’re on the board, and maybe you do something with that momentum."

The Cowboys (6-2) had their six-game winning streak snapped, but still reached the midpoint of their season with a significant NFC East lead. They are home again next week against Atlanta before playing three of their four games after that on the road.

Prescott was back after missing a game because of a strained right calf, though he missed some throws before two short TD passes to Turner in the final 4:08 of the game.

“We didn’t throw and catch the ball as we normally do, and it just wasn’t our best performance by any means. Obviously our worst of the year,” Prescott said, though he felt good physically. “It held up fine. It was great, I mean, did a lot of moving, did a lot of scrambling getting out of the pocket. No issues, haven't felt it. I'm fine.”

Prescott finished 19 of 39 for 232 yards with those two TDs and one interception, ending his franchise-record streak of four consecutive games with at least three passing touchdowns.

Things had started so well for the Cowboys when Tony Pollard returned the game's opening kickoff 54 yards into Denver territory. But they didn't even get a first down, with Ezekiel Elliott stuffed for a 1-yard loss on fourth-and-1.

After forcing a three-and-out, Prescott had a 32-yard pass to Amari Cooper while Dallas got to the 20 before bypassing a field goal. Prescott threw an incompletion on fourth-and-2.

Brandon McManus kicked a 27-yard field goal for a 19-0 lead midway through the third quarter after the blocked punt recovery by the Broncos.

“That stuff hurts, I just feel like we couldn’t get no momentum, couldn’t get anything going," rookie linebacker Micah Parsons said. “We've got to bend, not break. Things like that are going to happen and we've got to hanker down and try to get the ball back. I mean, there’s just no excuses.”

On the ensuing drive, Dallas had fourth-and-1 from its 40 when going again. Prescott, who scrambling to the right could have likely run for the first down, instead overthrew CeeDee Lamb after he had gotten behind a defender.

As for the blocked punt recovery, there was a tweet on the verified account for NFL Officiating with an explanation on why the Broncos got the ball back.

McCarthy, who said he was well aware of the rule, was then asked if he liked it.

“It doesn’t matter,” he said. “It’s not going to solve anything today.”