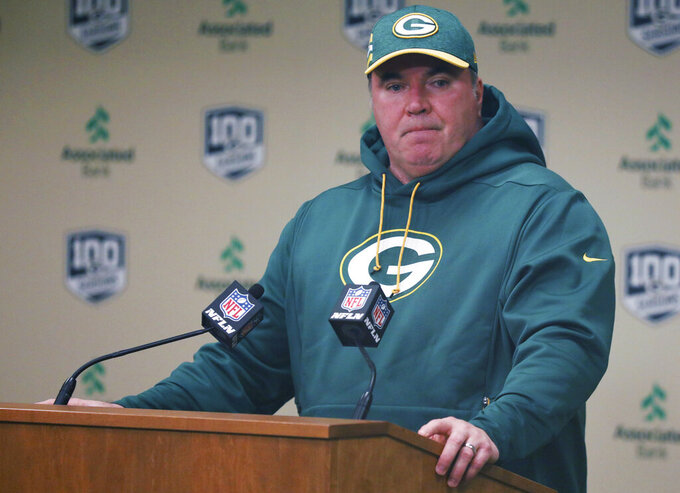 FRISCO, Texas (AP) — Mike McCarthy put off questions about his return to Green Bay as long as possible.

When the Dallas Cowboys coach finally had to talk about his old coaching home, he interrupted with an expletive as a reporter prone to queries on X's and O's went with a touchy-feely one.

“You guys are trying to make me cry,” McCarthy said, drawing hearty laughs. “Why don’t you ask me a question about 12 personnel or something?”

Sorry, coach. Everybody wants to know what's going through the mind of the man who led the Packers to a Super Bowl title before an unhappy ending with a midseason firing almost eight years later.

“The exit, it left a dent, just to be honest, with our family,” McCarthy said. “But it’s been four years. We’re so much better because of it. We’ve had time to process it all, and it’s a little unique.”

So is being a Super Bowl-winning coach in the NFL's smallest market, for a team that is publicly owned and has an annual shareholders meeting.

Vince Lombardi and Mike Holmgren, the other two title-winning coaches with streets named after them near Lambeau Field, left on their terms.

He was in the midst of a second consecutive losing season in 2018 after reaching the playoffs nine times in 10 years, with four trips to the NFC championship game and the 31-25 victory over Pittsburgh to end the 2010 season in the Super Bowl at the home of the Cowboys.

McCarthy took a year off — staying in Green Bay, which he said he wouldn't necessarily recommend — and was ready to take over another iconic NFL franchise when Dallas owner Jerry Jones came calling in 2020.

The Cowboys had given Jason Garrett nine full seasons to try to end what is now a 26-year stretch without even reaching an NFC title game. Jones wanted somebody with that track record.

Now Jones will be in the visiting owner's suite Sunday, with his coach on the visiting sideline as the Cowboys (6-2) play the Packers (3-6) where McCarthy's wife, Jessica, was born and raised.

“Her father is kind of the gatekeeper, the history for Green Bay, kind of the archivist for the team,” Jones said on his radio show this week. “And so, (McCarthy) lives pretty close to it.

“Secondly he’s got all of those really great memories, and he’s got some things that get under his skin a little bit I’m sure,” Jones said. “You add all of that together, and this is going to be quite a personal visit for him to Green Bay.”

McCarthy, who turns 59 three days before the game, isn’t denying any of this. He’s just struggling to talk about it.

Still, the coach says it's his job to address it with his players, and he's already done that.

“He says I know a lot of times throughout the journey that a lot of places bring you back to show you how much you’ve grown,” safety Malik Hooker said. “This probably means a little more to him because we’re at a point and place where his heart was. I definitely feel him and I for sure want to get the win for him.”

Aaron Nagler, co-founder of a fan website called “Cheesehead TV,” said he recalled a warm reception for a beloved Holmgren with Seattle in 1999, the year after he left the Packers.

Nagler, who says he's “fascinated” by how McCarthy will be received, envisions something between Holmgren and the vitriol aimed at quarterback Brett Favre with hated rival Minnesota in 2009.

One reception seems clear — from Packers quarterback Aaron Rodgers. Their apparently rocky relationship was the subject of much discussion before and after McCarthy's firing.

“I’m going to give him a big ol’ hug, I can tell you that much,” Rodgers said Tuesday on his weekly appearance on “The Pat McAfee Show” on YouTube and SiriusXM.

McCarthy said he never thought much about joining a small fraternity with Lombardi and Holmgren, and he sees many similarities between franchises that celebrate their history with strong alumni presences.

“They do a phenomenal job up there, no different than what Jerry does down here,” McCarthy said. “To think that I’ve been the head coach of the Green Bay Packers and now the Dallas Cowboys, frankly I never dreamed of that growing up in Pittsburgh.”

Pressed about how motivated he was to win, McCarthy smiled and said, “I really want to win the game. Is that enough?”

When the reporter with the touchy-feely question finally finished asking what McCarthy missed about Green Bay, the coach eventually bowed his head and tapped his fingers on the podium in silence, fighting back the tears.

Composed again a few minutes later after the topic finally turned to football, McCarthy knew he was down to one question in what he signaled would be the only day of the week he would discuss his return.

Would he walk down Mike McCarthy Way during the weekend?

“I just drive by once in a while to make sure the sign is still up.”