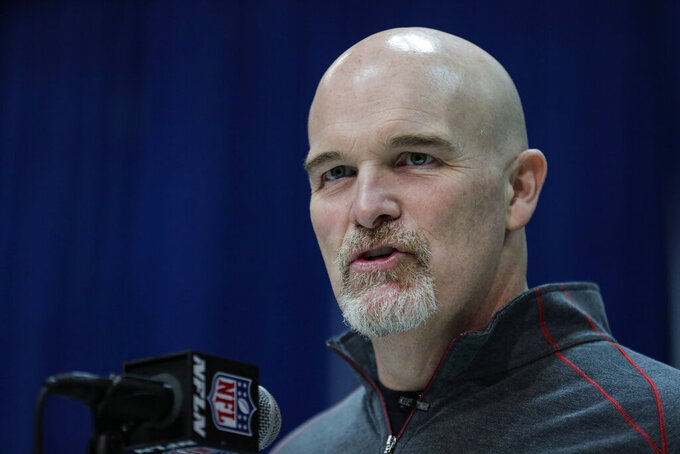 FILE - In this Feb. 25, 2020, file photo, Atlanta Falcons head coach Dan Quinn speaks during a press conference at the NFL football scouting combine in Indianapolis. The Dallas Cowboys agreed to terms Monday, Jan. 11, 2021, with former Atlanta coach Quinn as defensive coordinator, turning over a unit that was among the worst in franchise history to someone who built his reputation on defense in Seattle. (AP Photo/Michael Conroy, File)

FRISCO, Texas (AP) — The Dallas Cowboys agreed to terms Monday with former Atlanta coach Dan Quinn as defensive coordinator, turning over a unit that was among the worst in franchise history to someone who built his reputation on defense in Seattle.

Quinn was already on the hot seat with the Falcons before an 0-5 start that included Atlanta becoming the first team in NFL history to lose back-to-back games after leading by at least 15 points in the fourth quarter. One of those losses was to the Cowboys.

The 50-year-old Quinn replaces Mike Nolan, who lasted just one season as the most important hire for first-year coach Mike McCarthy. Dallas allowed a franchise-record 473 points (29.6 per game) and finished 31st in the NFL in run defense while going 6-10. The Cowboys also fired defensive line coach Jim Tomsula.

Dallas tried to implement a new scheme without in-person work during the offseason because of the pandemic, and the defense was plagued by blown assignments along with questions about effort while the team started 3-9. Owner Jerry Jones suggested the Cowboys tried to change too much given the restrictions brought on by COVID-19.

McCarthy never called the Dallas scheme a 3-4, although it was closer to that than the 4-3 approach that figures to return with Quinn. His top priority will be fixing a run defense that almost gave up 300 yards on the ground in a game twice. Dallas allowed a franchise-record 307 yards rushing in a 49-38 loss to Cleveland.

The Cowboys switched to the 4-3 in 2013 when Rod Marinelli joined the staff and eventually became defensive coordinator. Marinelli left along with coach Jason Garrett after the 2019 season, when Dallas fell short of high expectations and missed the playoffs.

Quinn was hired in Atlanta in 2015 after two seasons as Seattle’s defensive coordinator. The Seahawks went to the Super Bowl both years, winning the first with Quinn overseeing the “Legion of Boom” defense that featured star defensive backs Richard Sherman, Kam Chancellor and Earl Thomas along with linebacker Bobby Wagner.

The Falcons reached the Super Bowl for the second time in franchise history in Quinn’s second season. Atlanta blew a 28-3 lead in the second half, losing to New England 34-28 in overtime four years ago.

Quinn was 43-42 overall in Atlanta, but just 14-23 since the start of the 2018 season. Since 2001, Quinn has spent all but two years coaching in the NFL. He was Florida’s defensive coordinator for two seasons before joining the Seahawks. Quinn was the defensive line coach in Seattle for two years before going to Florida.